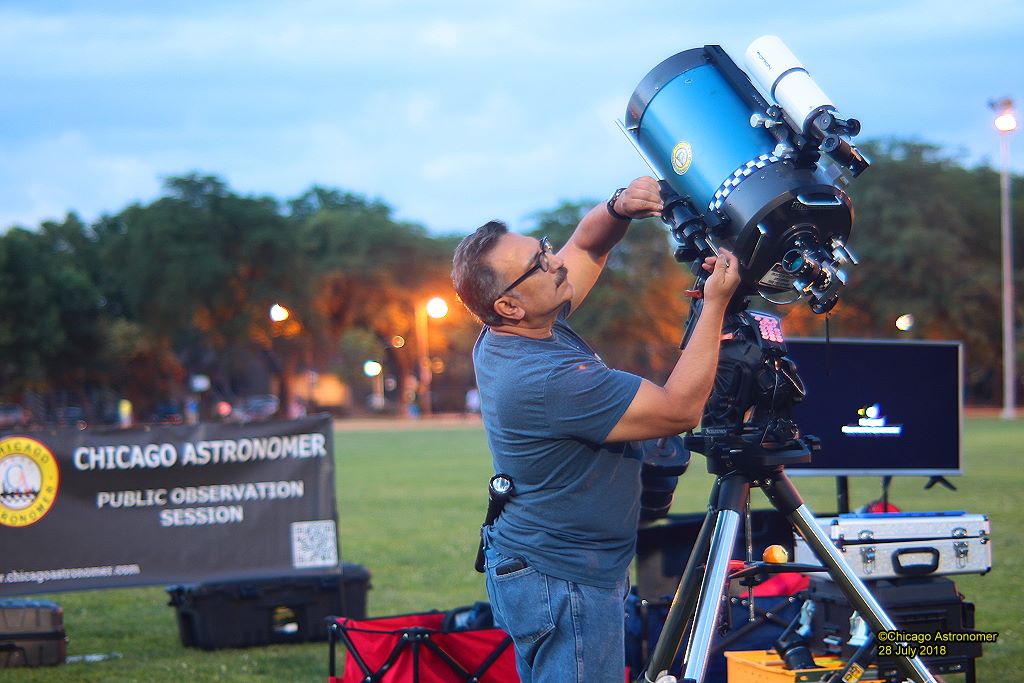 “Astro Joe” Guzman sets up one of his telescopes at an event where he encourages everyone, perhaps especially children, to enjoy the wonders of space. --Supplied photo

Head in the stars, feet on the ground

When Joseph Guzman was a child, he used to swipe his father’s binoculars and lie out in the backyard, exploring the urban skies with great fascination.

The young boy did not know what he was observing, but he felt a strong attraction to the stars.

When he reached age 8, Guzman’s mother bought him a 60mm Refractor telescope from Montgomery Ward (that he still has to this day). That rudimentary instrument opened up the universe for him. 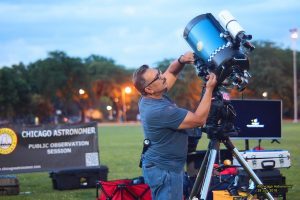 “Astro Joe” Guzman sets up one of his telescopes at an event where he encourages everyone, perhaps especially children, to enjoy the wonders of space. –Supplied photos

“I recall my first viewing of the planet Saturn from my backyard,” Guzman told the Greater Southwest News-Herald. “Not knowing that it was the sixth planet, I aimed my telescope on this bright star, low in the west. As the image was focusing ever so sharper, it was apparent that the image was resolving to something more than a pinpoint, as stars tend to be in telescopes; but rather, this object had tangible form. One final minute twist of the focus knob, and bam: there was Saturn in all its glory with a disk and beautiful ring system. Not in a book or a magazine, but in real time.”

That significant moment has echoed throughout the decades for Guzman, shaping not only his career but his life.

Guzman, now known by many as Astro Joe, is the founder and educator of the Chicago Astronomer, an organization of urban astronomers who gather frequently with telescopes and share the skies with friends, visitors and fans. 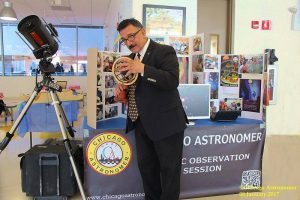 “That moment in my backyard is what the Chicago Astronomer is all about, connecting sky lovers with the cosmos firsthand and with their own eyes,” Guzman said.

When Guzman retired from the Chicago Police Department after 20 years as an instructor and community/youth programs organizer, the cosmos was still there, waiting for him to return. He always had a high interest in astronomy throughout that period of his life, but time was scarce, with duties on the job and at home taking care of his aging parents. Upon retirement, it was finally time for Guzman to pursue his dream.

“With more free time, I used to set up my more elaborate telescope by the Adler Planetarium for the ambiance and view celestial objects rising up over the lake from the east,” Guzman said. “Planets, the moon, stars, excreta. People would come up to me and ask what I was doing and could they take a peek. After a short while, I was building relationships with fellow urban sky lovers, having great discussions and they wanted to know when I would be returning.” 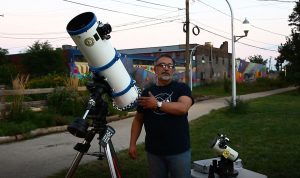 With no real schedule or association with any institution at the time, Guzman started taking email addresses, but the number of people interested was starting to grow into hundreds.

It was in 2004 he established the Chicago Astronomer to better communicate with the public, post information on upcoming celestial events and when he would set-up a telescope so people could share in the viewings with him.

“Almost immediately, the Chicago Astronomer took off in popularity and participation,” Guzman said. “Television and print media requested interviews and insights on urban astronomy. Sky lovers wanting to bring their telescopes and join me, parents desiring to foster their kids’ interest in the stars and those who wanted to touch the stars all were now part of the Chicago Astronomer. We have legions of loyal fans throughout the metropolitan area, and world, and we are still growing.” 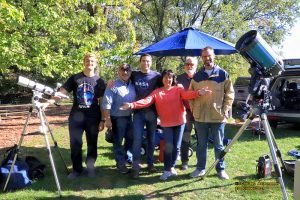 The Chicago Astronomer is not a club, but rather an educational resource organization. They are the resident astronomer crew for the Chicago Park District, setting up telescopes in parks from the northern city limits to the southern border. They also maintain residency and set up equipment on the 606 Bloomingdale Trail, attending to thousands of sky loving fans throughout the observational season.

“Depending on the venue, I engage with my audience in a pre-observation interactive mini lecture on varied topics such as, planetary characteristics, solar behavior, Apollo missions to the moon or constellation lore and how to find Polaris, the North Star,” he said.

“In the Chicago Astronomer crew, there are about a dozen skilled and social friendly astronomers, who share their skills and equipment with the public. Its fanbase is in the thousands, who anticipate our appearance at their park or institution.”

Aside from founding the Chicago Astronomer, Guzman is also the Space & Astronomy Instructor for After School Matters, with high school teens from all parts of the city, eager to indulge in all things space.

Guzman said studying space is better than any Sci-fi movie.

“There is a pause in time we call the wow moment,” Guzman said. “This is when an observer has a first sighting of the Rings of Saturn, the craggy surface of the moon or the cloud bands on Jupiter. This is what field astronomers enjoy the most, far distant objects brought up close to study, marvel and build a relationship with. We especially enjoy introducing urban astronomy to our very young fans, who have a natural curiosity about the universe and want to share what they have studied and look through telescopes.”

The Chicago Astronomer and Astro Joe have a busy 2022 Chicago Astronomer Observational Schedule with meets in across the city, including Northerly Island, Big Marsh and North Park Village Nature Center. They will also be at West Lawn Park, 4233 W. 65th St., for a stargazing event from 7 to 9 p.m. Saturday, Aug. 6, with a rain date set for Aug. 23. There is no admission charge.

“I encourage all those who are awed in the mysteries of space, to look up and notice the sky,” Guzman said.