A bill sponsored by U.S. Rep. Bobby L. Rush (D-1st) that would — for the first time in history — designate lynching as a federal hate crime passed the House of Representatives earlier this week by a 422-3 vote.

The bill (H.R. 55) is called the Emmett Till Antilynching Act to honor the memory of the Chicago boy abducted, tortured and murdered in Mississippi in 1955 after he allegedly whistled at a white woman.

On the South and Southwest Sides, 71st Street—from Stony Island to Kedzie was given the honorary name of Emmett Till Road in the 1980s.

More than 6,500 Americans were lynched between 1865 and 1950, according to a report from the Equal Justice Initiative.

Rush reintroduced the Emmett Till Antilynching Act on the first day of the 117th Congress and has worked with the House Judiciary Committee and the Senate to reach agreement on the bill text. H.R. 55 currently has 182 co-sponsors in the House–both Democrats and Republicans.

“Today is a day of enormous consequence for our nation,” Rush said Monday. “By passing my Emmett Till Antilynching Act, the House has sent a resounding message that our nation is finally reckoning with one of the darkest and most horrific periods of our history, and that we are morally and legally committed to changing course.

“The failure of Congress to codify federal anti-lynching legislation — despite more than 200 attempts since 1900 — meant that 99 percent of lynching perpetrators walked free. Today, we take a meaningful step toward correcting this historical injustice. I am immensely proud of this legislation, which will ensure that the full force of the U.S. federal government will always be brought to bear against those who commit monstrous acts of hatred. 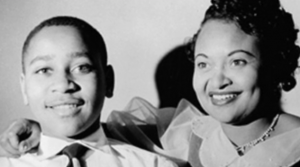 Emmett Till and his mother, Mamie Till-Mobley.

The congressman said he was “eight years old when my mother put the photograph of Emmett Till’s brutalized body that ran in Jet magazine on our living room coffee table, pointed to it, and said, ‘This is why I brought my boys out of Albany, Georgia.’ That photograph shaped my consciousness as a black man in America, changed the course of my life, and changed our nation. But modern-day lynchings, like the murder of Ahmaud Arbery, make abundantly clear that the racist hatred and terror that fueled the lynching of Emmett Till lynching are far too prevalent in America to this day.”

Rush thanked his colleagues in the House Judiciary Committee and the Senate, who he said “worked tirelessly” with him throughout the last year to reach agreement on the text of the legislation.”

The Emmett Till Antilynching Act was first introduced by Rush in the 115th Congress. It passed the House of Representatives for the first time during the 116th Congress — in February 2020 — with overwhelming bipartisan support, but was blocked in the Senate.

Under the bill that passed the House this week, a crime can be prosecuted as a lynching when a conspiracy to commit a hate crime results in death or serious bodily injury. Rush said the legislation passed by the House today differs from the anti-lynching legislation passed during the 116th Congress in two primary ways:

These folks known their lawns

By Mary Stanek Your correspondent in Archer Heights and West Elsdon 3808 W. 57th Place • (773) 284-7394 Well hello, August, on Monday. We are enjoying the hot, sultry dog days of summer. The Peck School play lot is complete. For now, it appears to be open to all the neighborhood children. From what I…