March 6, 2022/Comments Off on Lucky 13: Sandburg’s Josie Canellis is Illinois’ Queen of the Hill 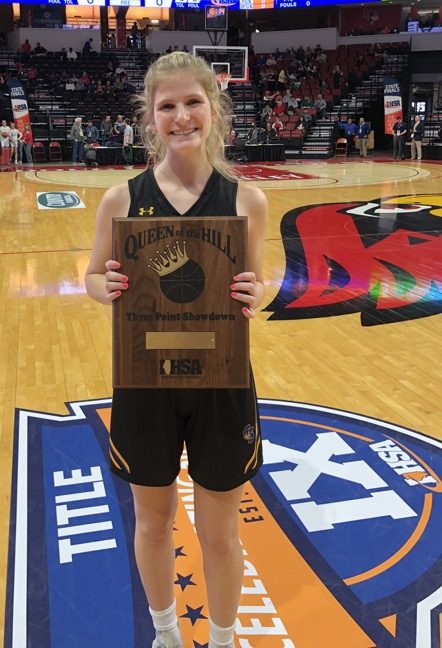 Sandburg's Josie Canellis won the Queen of the Hill championship in Normal on Saturday. Photo courtesy of the IHSA

Lucky 13: Sandburg’s Josie Canellis is Illinois’ Queen of the Hill

She never found it to be an unlucky number.

Even though she is wearing No. 5 for the Eagles, the junior still has some fond thoughts about 13, especially after competing in the IHSA 3-point Showdown the past few weeks.

She hit 13 treys out of 15 attempts to get out of regional play. She advanced to the state meet in sectional play by drilling 10.

On Saturday, it was back to the 13 show.

After sweating it out in the preliminary round in Class 4A with a pair of tiebreakers, she won that portion of the event hitting 13 of 15 at Redbird Arena in Normal.

Then, all four class champions competed in the final round, and Canellis became the Queen of the Hill in Illinois by firing up another 13-for-15 performance.

After advancing to state, she worked hard on her game.

“I took 2,600 shots in a week,” she said. “There were times when I would hit 15 and that felt good. But when you get down there, you never know what’s doing to happen and you never know the pressure you will be feeling.

“I made it my freshman year and I didn’t do too hot. My nerves just got to me. Even this time, I started out quite rough. But each time I gradually got better.”

“Josie is an incredible shooter and she just proved that she is the best 3-point shooter in the state,” he said. “It was a crazy morning, and once she got in her rhythm she could not miss.” 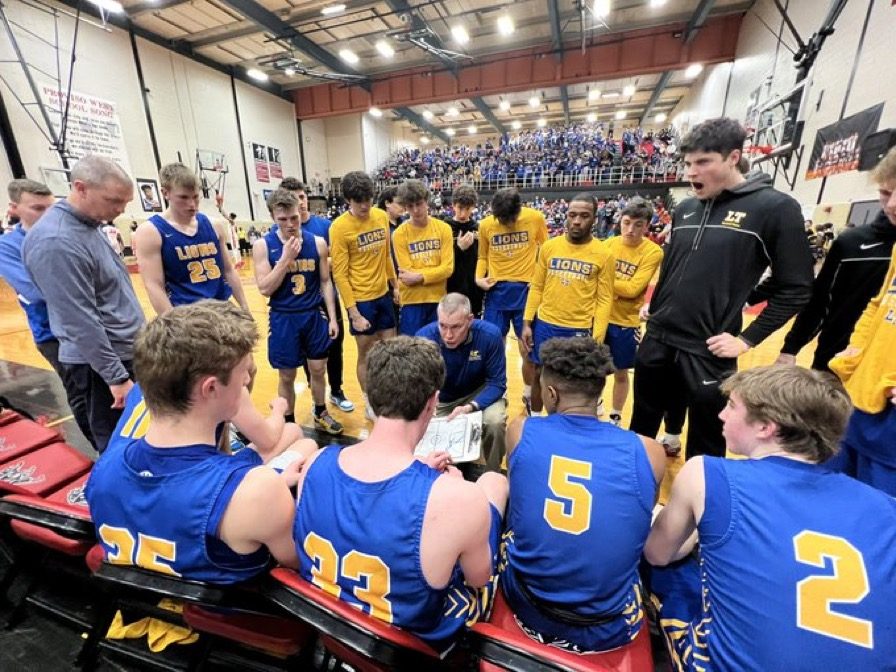 Lyons’ basketball team made it to the Sweet 16 before bowing out to Young. Photo courtesy of Lyons Township High School

Tavari Johnson had 23 points, three assists and three steals in the loss.

That finished the week on a down note, but few fans on will forget the way the Lions got to the final. They beat Curie, 44-41, in overtime on March 2. Lyons was led by Will Carroll’s 12-point effort, including what turned out to be the game-winning 3-pointer with 13 seconds left.

The Lions finished the season 26-6, with three of those losses coming to Glenbard West, which has advanced to the elite eight.

Zeroes across the board
The professional soccer season in Chicago hasn’t exactly started out with a bang.

The Chicago Fire played to a pair of 0-0 deadlocks to open the 2022 MLS campaign.

The latter faced the U.S. Women’s National Team in the first preseason battle of 2022 and came up with a scoreless draw Saturday in Portland, Oregon. It was the first professional competitive match for new coach Chris Petrucelli, a lifelong college coach.

Challenge Cup pairings
The precursor to the National Women’s Soccer League is the Challenge Cup, which the Red Stars will open March 20 at Houston.

They play their first home game at SeatGeek Stadium on March 25 when they host the Kansas City Current. On March 30 they host Racing Louisville FC and on April 2 they host Houston.

It’s back to the road April 16 at Louisville and April 24 at Kansas City.

The NWSL schedule has not been released, but the season will start in May.