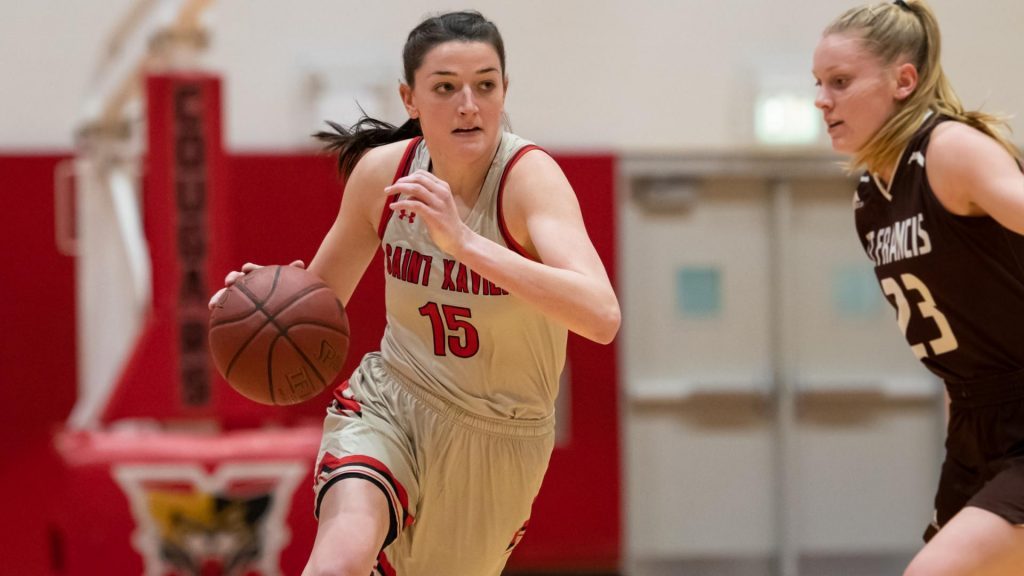 Claire Austin and SXU's women's basketball team play in in the opening round of the NAIA Tournament on Friday in Nebraska. Photo courtesy of St Xavier University

St. Xavier’s women’s basketball team may have ended the conference tournament on a rough note, but it is still going to the NAIA National Tournament with a top-five seed in regionals.

The Cougars (25-6) earned the fifth seed in the Omaha Sports Commission Bracket and will play No. 12 Bethel (Tenn.) in the NAIA Opening Round on Friday at DJ Sokol Arena in Omaha, Nebraska.

Bethel (19-13) earned an at-large bid out of the Mid-South Conference.

It will be the fourth meeting all-time between the two teams. Saint Xavier is 3-0 all-time against the Wildcats.

The winner faces either No. 4 seed Dakota Wesleyan University (26-7) or 13th-seeded University of Saint Francis (17-9). The second-round game is scheduled to be played March 17 at the Tyson Events Center.

Saint Xavier was the Chicagoland Collegiate Athletic Conference regular-season champ and was runner-up in the CCAC Tournament Championship, falling 88-68 loss to St. Francis (Joliet) in the title game.

The Cougars collected some league awards.

Big Week for Irvin
Former SXU women’s coach Corry Irvin, who served as an assistant coach at Illinois this season, has been named interim head coach at the Big Ten school after the retirement of Nancy Fahey.

Irvin’s brother, Deryn Carter, is the head coach of the Larkin (Elgin) boy’s basketball team, which won a sectional title on March 3.

Pride of the RedHawks
The College Conference of Illinois and Wisconsin selected Loras’ Patrick Mahoney and Carthage’s Gene McNulty as its Men’s Volleyball Student-Athletes of the Week on Feb. 29.

Mahoney an McNulty are Marist graduates who hail from Oak Lawn.

Mahoney, a senior middle blocker, hit .796 while helping lead the Duhawks to a 4-0 record. He totaled six kills and two digs in a three-set win over Augustana on Feb. 22, followed by five kills, seven digs and a 1.000 hitting percentage in a sweep of Rockford on February 25.