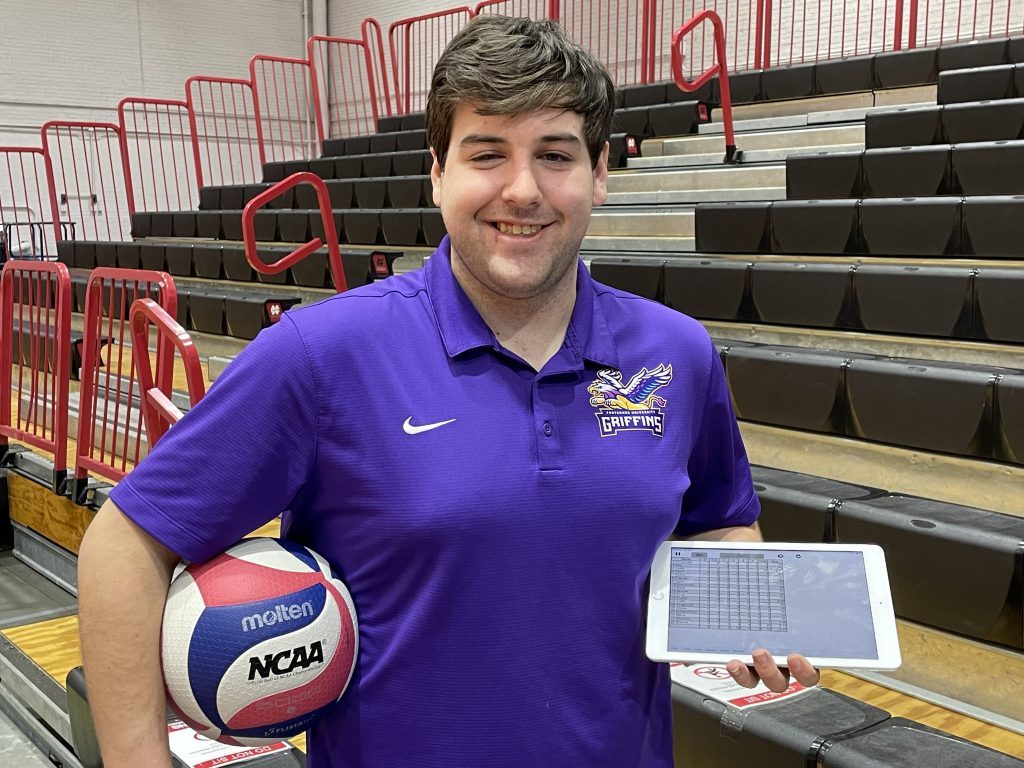 Evergreen Park native Zach Rothstein has traded the volleyball for an iPad for his tools of the trade as he is an assistant coach for his alma mater, Fontbonne University. Photo by Jeff Vorva

The Evergreen Park native admits there is a time or two where he wouldn’t mind diving to make a few plays, but not on a daily basis.

“I’m definitely past playing and I definitely enjoyed it,” Rothstein said. “But there are times when the ball hits the ground, I want to get that. But my time at Fontbonne is done and it was great.”

Rothstein left the program as the NCAA Division III all-time leader in digs with 1,327. He was also a member of two national tournament teams at the St. Louis school, which was 33-177 in its first nine years.

Today, he enjoys his view from the bench.

“I get a different view of the court,” he said. “I see what’s going on in the front row with blocking schemes. As a libero, I only got to see what people serve and how they serve. From coaching side, I see a full range of everything.”

He also said he likes passing his knowledge on to younger players, even though he is only one year removed from the team.

“They know that I know what I’m talking about,” he said.

There is a chance Rothstein may hit the court again. He was invited to play for the United State team last summer in the 2022 World Maccabiah Games, which he calls “the Olympics for athletes in the Jewish community.”

He said it is still up in the air whether he will participate.

SXU falls in opening round
Saint Xavier’s women’s basketball team, seeded fifth in the NAIA Opening Round Omaha Sports Commission Bracket in the Naismith quadrant, dropped a 79-69 decision to 12th-seeded Bethel University of Tennessee on March 11.

Senior forward Claire Austin, a Marist graduate, led the Cougars with 19 points, 10 rebounds, five assists, two blocks and a steal. Austin was 11-for-13 from the foul line and posted her 20th double-double of the season.

The Cougars finished the season 25-7.

“I’m very proud of this team,” first-year coach Travis Brewster said. “They didn’t make an excuse or shy away from any challenge all season. I want to thank our seniors for their tremendous work ethic and leadership on and off the court.”

McMahon’s the man
Orland Park native and Brother Rice graduate Jack McMahon, who is attending Navy, was named a Division I All-American in rugby by National Collegiate Rugby. McMahon is the 41st All-American in the history of the Midshipmen’s program.