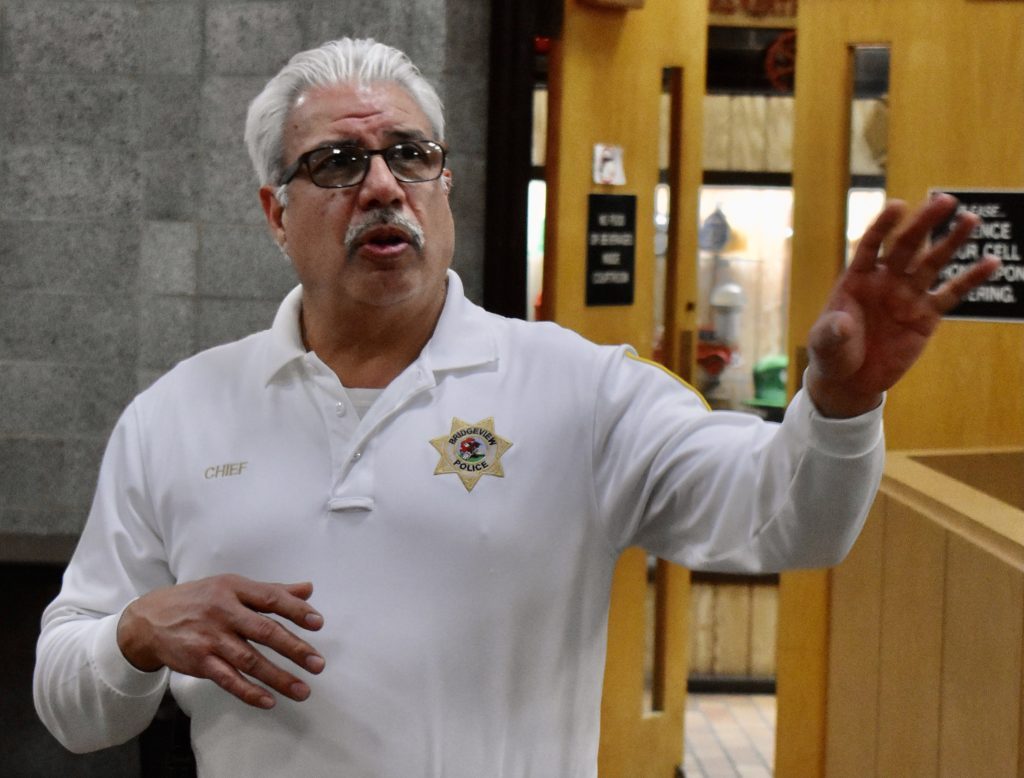 Bridgeview Police Chief Ricardo Mancha said a new $250,000 digital radio system will be a big improvement for the department. (Photo by Steve Metsch)

Bridgeview is spending $250,000 for a state-of-the-art radio system that Police Chief Ricardo Mancha said will be a vast improvement for the department.

The village board at its March 2 meeting unanimously approved the purchase of 45 portable digital radios and accessories from Motorola Solutions.

“Doing this is going to save us some money,” said Trustee Norma Pinion, who oversees the police department.

“The way it’s going now, our system is getting very old and we can’t replace some of the parts that are going bad,” Pinion said. “This will save us money in the long run.”

Mancha addressed the board about the purchase before trustees voted.

A benefit of having a digital radio system “is no scanners will be able to listen to the police radio. They’ll be secure in that sense,” Mancha said.

“Also, we’re getting a more reliable system,” Mancha told the trustees. “We always strive for better communication and this should help us get there.”

Mayor Steve Landek noted that the money will come from the drug seizure fund, not the village’s general fund.

“Slowly, communities are changing over (to digital),” Landek said. “The big thing is privacy. The police scanners won’t pick up anything from a digital radio.

“Some people hear the radio scanners and run out (to a crime scene),” Landek said. “When you think about it, it’s common sense. Criminals must have (police) scanners, too.”

Another nice feature is that digital radios don’t allow more than one person to talk at one time, meaning voices will not overlap each other, as they can now, sometimes leading to confusion, Landek said.

Mancha said: “That’s a big plus because now if we are both are on the radio, both voices become garbled.”

“This will prevent that,” he said. “If you are on the radio, it will not let me cut in. There’s no perfect system, but the plusses outweigh the minuses.”

Bridgeview will still use the 911 Dispatch Center based in Oak Lawn.

“From what I understand, Motorola is the only game in town for reliability for this type of radio system,” Mancha said. “And we bought a couple of extras for when we have a big event at the stadium.”

Auxiliary police would use those for events like the upcoming international soccer tournament at SeatGeek Stadium on June 4-5, he said.

Another benefit is Motorola fixes equipment if it breaks, he said: “Now, of course, if we break a radio that’s on us. But if something else goes down …”

The board also unanimously approved paying $41,286 to CDS Office Technologies for eight Panasonic CF-33 “fully rugged” tables and accessories for use by the fire department.

“This was a long time coming,” said Trustee Patricia Higginson, who oversees the fire department.

“We’re looking to streamline everything,” Toczek said. “We currently have three versions of computers. This is better for us.”