Skip to content
March 15, 2022/Comments Off on Ukraine brings out emotions from Palos Heights council 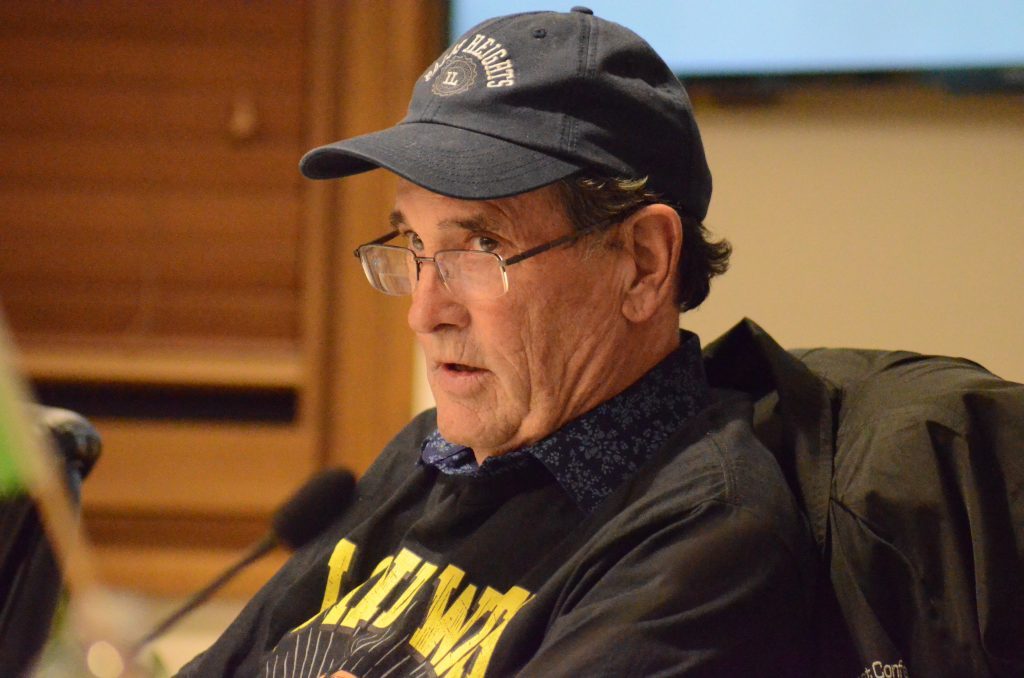 Palos Heights Alderman Jack Clifford said the invasion of Ukraine reminds him of his mother's ordeal in England. (Photo by Jeff Vorva)

There was a mixture of gratitude, sadness and anger at Tuesday night’s Palos Heights council meeting regarding Russia’s invasion of Ukraine.

Alderman Jerry McGovern thanked several of the other aldermen for “running around half this city and other suburbs donating and collecting everything under the sun so they could pass them off to our two Ukrainian churches.”

This invasion reminded Alderman Jack Clifford about the struggles his mother went through in England during the 1940s when Germany was invading countries throughout Europe.

“She lived through the blitz,” Clifford said. “She was in Manchester and when the Germans bombed that area, she had shrapnel in her leg. She would tell stories of the bombings and the children being taken to the tubes, which is the subway system.”

Clifford then read a prayer for the people of Ukraine.

McGovern did a slow boil over when he started talking about Russian President Vladimir Putin’s role in creating the carnage and misery for Ukraine.

“I just can’t understand this,” said McGovern, who along with Clifford were Marines. “I don’t know if this man is trying to make the history books and be superior to Adolph Hitler and Joseph Stalin with the way he is acting. If he really wants to be such a war criminal … he bombs a maternity hospital … I don’t know.”

The March 7 public hearing hosted by the License Permits and Franchises Committee yielded a lot of opinions pro and con for bringing in video gaming to Palos Heights, but the next move is still in the talking stages.

Chairman Brent Lewandowski said that since the meeting, he received more than 50 emails on the topic.

“The committee is still evaluating the response from the community,” Lewandowski said.

The bridge over the Cal-Sag Channel on Ridgeland Avenue will undergo major repairs starting April 1 and could end in March 2023.

“Lane closures are anticipated through the duration of this project,” Clifford said. “Sometimes both lanes will be closed during off hours. The traffic will probably flow to Harlem Avenue or one of those other streets. It will be pretty busy.”

Mayor Bob Straz will give a state-of-the-city address at noon Tuesday in the Orchard Room at the Palos Heights Recreation Center, 6601 W. 127th St.

Included in the address will be a video presentation.