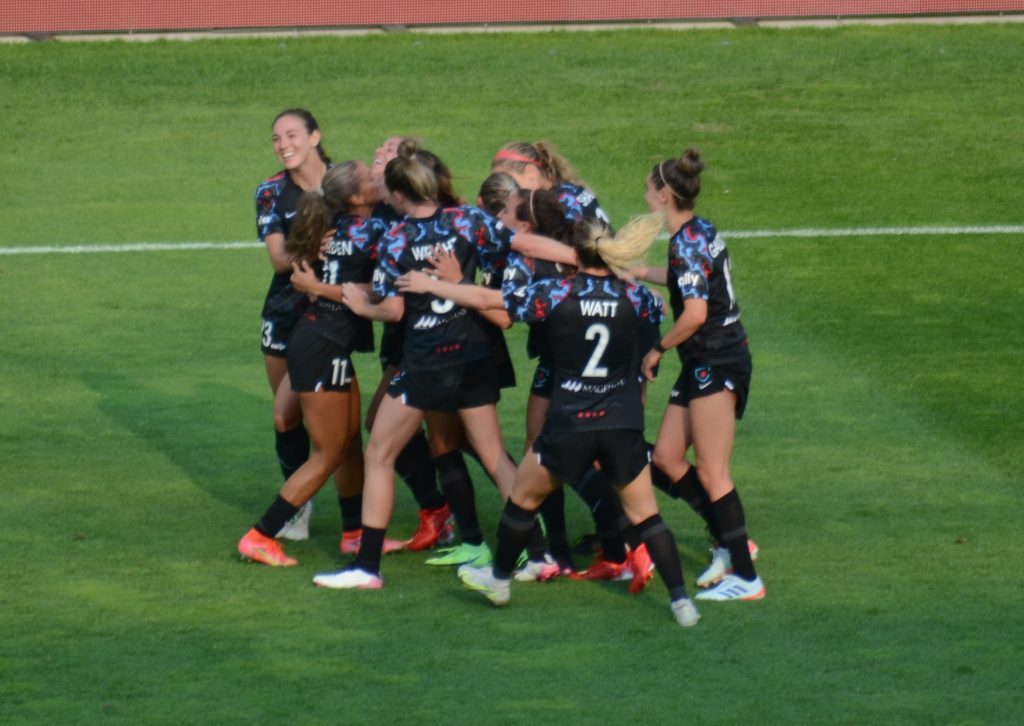 The Chicago Red Stars, shown celebrating a goal during the 2021 season at SeatGeek Stadium in Bridgeview, hope there will be more celebrations in 2022. They play their first home Challenge Cup game at 7:30 p.m. Friday. Photo by Jeff Vorva

The Chicago Red Stars, who make their 2022 home debut in the Challenge Cup at 7:30 p.m. Friday against Kansas City at SeatGeek Stadium in Bridgeview, finished runner-up in each of the past two NWSL seasons in 2019 and 2021. There was no postseason tournament in 2020 because of the pandemic.

“We have not gotten what we want,” said Venessa DiBernardo. “The last piece is still there to get, and that’s to win the championship. That’s still our goal and that’s something we want to get, and we’ll be working for that all year long.”

“We’ve been right there every year,” added defender Arin Wright. “New players and old, the mentality of the players is to want to win a championship.”

The Challenge Cup is a warmup to the NWSL season, and the Red Stars opened Cup play up with a 3-1 victory over Houston on Sunday at PNC Stadium.

Mallory Pugh scored a pair of goals and Wright scored on a penalty kick.

Katie Naughton, a former Red Star, scored in the 19th minute to give the Dash a 1-0 lead.

Kansas City brings an 0-0-1 record after Friday night’s 1-1 deadlock with Louisville. Addie McCain scored in the 78th minute to tie it.

This is coach Chris Petrucelli’s first year at the Red Stars helm. He succeeds Rory Dames, who resigned a day after the NWSL championship loss to Washington.

Petrucelli was hired in February and has been with the team for a little more than a month, but he had a chance to see the team in action with a preseason swing in Portland, where the Red Stars finished 0-2-1 and scored just one goal.

“I feel like we’re moving forward in the right direction,” he said. “I’ve been able to evaluate a lot of the players and their style of play. We’re still implementing some things, but we’ve certainly made a great deal of progress.

“What I’ve seen is a talented team that plays hard and wants to win. There is a gritty mindset with the team, which is certainly is not something that I implemented. It’s just something that they have. It’s been pretty good so far.”

Each of the league’s 12 teams will play their 11 opponents twice for a 22-game schedule.

The Red Stars will open the season at home at 7 p.m. April 30 against Louisville. Their first rematch with Washington since the title game will be next on tap on at 7 p.m. May 7. They meet in Leesburg, Virginia, on June 4.

The Red Stars will play 10 home games at SeatGeek Stadium in Bridgeview and one at Soldier Field. They host San Diego at 7 p.m. July 30 on the Chicago lakefront.

There are many changes to the Chicago House as it embarks on its second season.

The team played its inaugural year in the National Independent Soccer Association with home games at SeatGeek Stadium.

Peter Wilt, the man who helped bring the Fire and Red Stars to Chicago, and his House staff will have some decisions to make.

The House is now in the Midwest Premier League, which is affiliated with NISA.

Will that mean a change in venue for the House? Can the House continue to afford the luxury of being able to use SeatGeek Stadium? Or will they have to set their goals smaller? Those are answers forthcoming before the MPL season gets rolling.

According to a news release, there will be announcements in the future regarding its home venue, schedule, coaching staff, player tryouts and other items.

The House will play in the West Division. Among the teams they will face include Berber City FC from Chicago, Cedar Rapids Inferno, Chicago Athletic FC, Chicago Mustangs, DeKalb County United and Milwaukee Bavarian SC.

A look at the Red Stars’ home Challenge Cup games: