March 24, 2022/Comments Off on St. Bernadette pastor thanks Evergreen Park for Ukrainian support 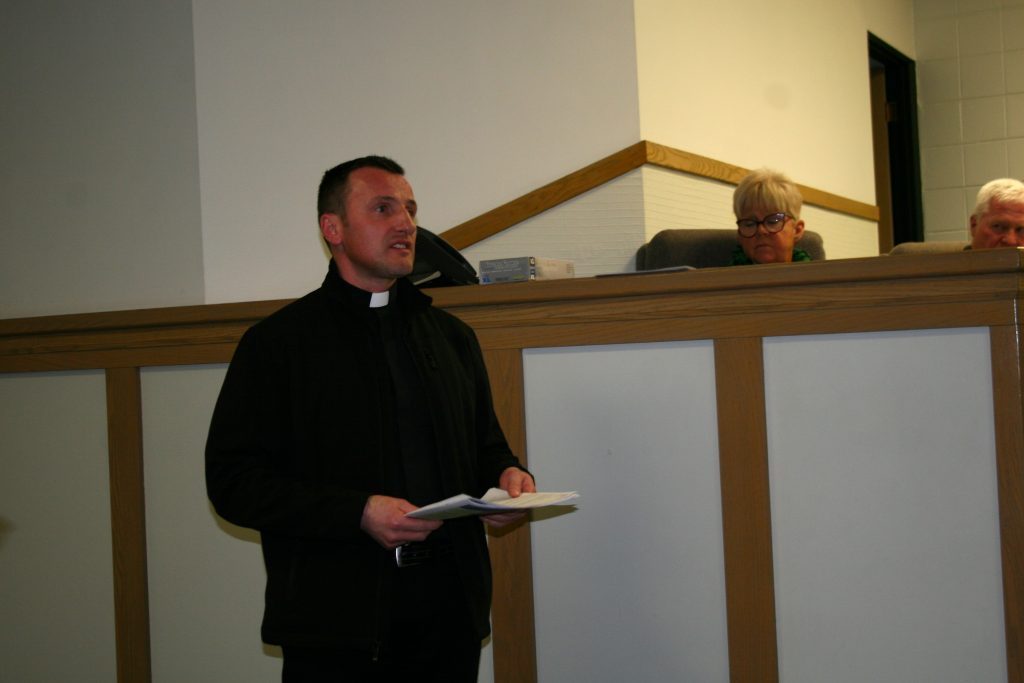 The Rev. Benedykt Pazdan, pastor of St. Bernadette Parish, thanks everyone for their support for Ukrainian refugees at the Evergreen Park Village Board meeting on Monday night. (File photo)

The pastor of St. Bernadette Parish in Evergreen Park is thankful for the support the community provided to give aid to the suffering refugees of Ukraine.

Evergreen Park Mayor Kelly Burke said during the village board meeting Monday night that collections for the refugees who have fled or are still living in war-torn Ukraine continued through this past Tuesday.

Pastor Benedykt Pazdan invited parishioners and the community to make a monetary donation to St. Bernadette Church with a memo, “Ukrainian Relief.” Pazdan said the money will benefit Catholic Charities in the Diocese of Rzeszow, Poland, which is involved in providing humanitarian aid for the Ukrainian refugees.

The city of Rzeszow, Pazdan said, is near the village where his parents live. He said during the March 7 Evergreen Park Board meeting that Rzeszow shares a border with Ukraine. The pastor began his seminary studies in Rzeszow before arriving in the U.S. One of his classmates is now the director of Catholic Charities of the Diocese of Rzeszow.

“It helps that I know someone there,” Pazdan said. “It helps that I have a personal connection with a trusted organization that will make sure all donations go straight to the right cause.”

“Our heart goes out to the Ukrainian people,” Burke said. “It’s a big job and I’m glad Fr. Benedykt was able to take it on.”

The Evergreen Park mayor also mentioned that many local parishes provided supplies and food to St. Bernadette that was sent to assist Ukrainians, many of whom have left their country due to the Russian invasion that began on Feb. 24.

“Trustee Mark Phelan has organized a relief effort at Most Holy Redeemer,” Burke said. “I thank him for his efforts.”

In other action, Burke was happy to report that members of the Evergreen Park Fire Department have been selected by the state fire marshal to receive awards at the annual Memorial Service and Award Ceremony on May 10 in Springfield. On two occasions, village firefighters were able to save residents who were in homes that were on fire.

“We are very proud of the hard-working members of the fire department,” Burke said.

Michael Saunders, police chief for the village, declared that two vacancies have occurred in the department due to the retirement of Detective John Murphy and officer David Sass. Saunders requested that two individuals be hired from the Probationary Patrol Officer Eligibility List.

The board each voted 6-0 to declare the vacancy and approved that two individuals from the list be hired at a later date.

A $6,000 grant was secured from the CSX Corp. to defray a majority of the cost for the purchase of a traffic control speed trailer. The total cost of the trailer is $1,601.

Burke joked that the important event of the night was the unanimous approval of a resolution for the Independence Day Parade along 95th Street on Friday, July 1.

The mayor said as part of the resolution, they need permission from the Illinois Department of Transportation to block a portion of 95th Street to allow for the parade to take place. The fireworks show will follow at Duffy Park.

A resolution also received unanimous approval for improvement under the Illinois Highway Code in the amount of $1,090,270 for the 2022 Street Rehabilitation Project.

A business license was rewarded to Women’s Healthcare, 2850 W. 95th St., which has changed its suite number to 301 in the Mary Potter Pavilion of OSF Little Company of Mary Medical Center.

The owners said they would be mostly selling wine and a small selection of beers.

By PETER HANCOCK Capitol News Illinois [email protected]wsillinois.com SPRINGFIELD – State Sen. Emil Jones III pleaded not guilty in federal court Friday to three felony counts stemming from an alleged bribery scheme involving a red light camera company. Jones, 44, is a Chicago Democrat who has served in the Senate since 2009. He is also the…