March 24, 2022/Comments Off on Standing with Ukraine 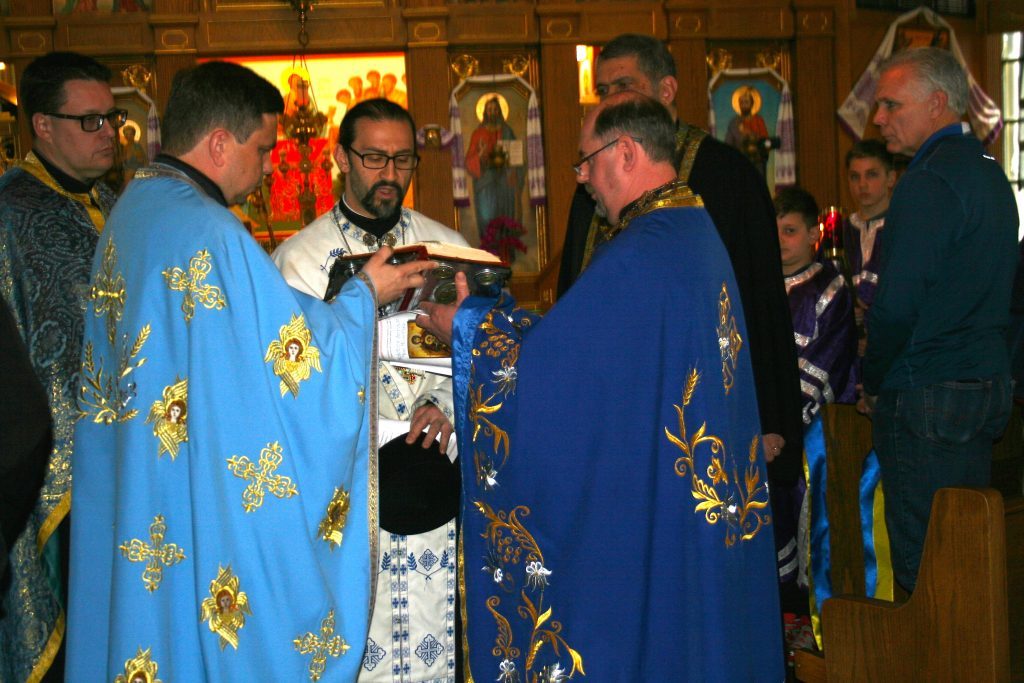 Members of various clergies say prayers during the vigil service held Saturday at Sts. Peter and Paul Orthodox Church in Palos Park. Pastor Vasyl Sendeha (second from left) also spoke about the need for prayers after the Russian invasion of Ukraine that began last month. (Photos by Joe Boyle)

Many parishioners at Sts. Peter and Paul Ukrainian Orthodox Church in Palos Park are dealing with the shock of seeing their native homeland attacked by Russia.

But what they were asking for during a Saturday afternoon service at the church, 8410 W. 131st St., was something they believed they all could do to help: Pray for Ukraine.

The joint prayer for Ukraine service drew a full house of people that not only included parishioners but political leaders, clergy and community organizations. 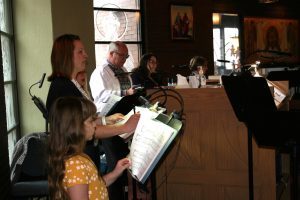 The choir sang a variety of songs and hymns during the prayer vigil service held Saturday at Sts. Peter and Paul Ukrainian Orthodox Church in Palos Park.

“The Ukrainian people need our prayers,” said Olenka Sendeha, a member of the choir and wife of Pastor Vasyl Sendeha. “We just want to make a little noise to draw attention to the people of Ukraine.”

The Sendehas reminded everyone that the images and reports coming from Ukraine are horrific. As of Sunday, Russian forces had pushed deeper into the southern port city of Mariupol. The Russian military, whose ground attack featuring tanks has been stalled outside most major cities of Ukraine, have been shelling those same areas that has resulted in numerous deaths and injuries.

Many of those injured and killed have been Ukrainian women and children.

Mary Wisniowski, parish president, said the carnage has been difficult to take.

“I saw the other day 109 strollers lined up in Ukraine representing children that have been lost,” Wisniowski said. “This is just so terrible.”

Members of the Ukrainian National Women’s League of America Branch 140 were located at the back of the church collecting supplies, clothing and toiletries for the Ukrainian refugees. The local chapter is based out of Chicago. The organization first began in New York City in 1925 and now has branches across the country.

Father Vasyl Sendeha said that prayer is important during this crisis. He recalled that it was just a couple of days ago when they were packing supplies at the church to send to Ukrainian refugees that a girl about 8 years old asked him why there can’t be peace in the world?

Father Vasyl added that there is evil in the world and that Russian President Vladimir Putin exemplifies that.

“Today is March 19 and it is already 24 days since the Russian Army invaded Ukraine for the second time,” Father Vasyl said during the service. “The first time was in 2014 when they invaded Crimea. This time it was supposed to be a military operation that would last four days and now it is 24 days. So, it’s ongoing. Many people have lost their lives. So, that’s why we are in this church, to pray to guide the leaders of the world not just to speak about it. They should do more about it.”

Pekau, who served in the U.S. Air Force as an instructor weapons system officer with over 150 combat hours over southern Iraq, spoke during the service.

“As many of you know, I served in the military,” Pekau said. “I’ve been in a war and it’s a terrible thing. People ask me why I served and I served because there is evil in the world. And we are seeing that today. America must stand with Ukraine.”

Pekau said that earlier in the day he saw great support in Orland Park where residents and volunteers collected a vast load of supplies for the Ukrainian refugees.

“The war keeps going,” Father Vasyl said. “The president of Russia is becoming more upset because it is not going the way he intended. They are using bombs that are forbidden. They are using them on children’s hospitals. Everyone is saying the Russian president is a war criminal. Yes, that’s true.”

Olenka Sendeha said this is the second prayer service held for Ukraine at the church in the past two weeks. During the Saturday service, stickers that read “I Stand With Ukraine” in blue and gold colors representing the nation’s flag were distributed to those in attendance.

Many parishioners also brought Ukrainian flags to wave during the service. Olenka Sendeha, who also sang with the choir, thanked clergy members from throughout the southwest suburbs and Chicago who attended the service.

Mark Turner also spoke at the vigil. The U.S. Marine veteran went to Ukraine after a friend asked for help. He was accompanied by a volunteer. They arrived in neighboring Poland after the invasion began. He just came back last week. He was impressed with the dedication and determination of Ukrainian residents.

“I didn’t go to Ukraine to pull a trigger,” said Turner, who was in the Marine Corps for 10 years in special operations. “That’s not why we went there. We knew we could help. I said to my partner that we could do more than bring medical supplies. Ukrainians are doing an incredible job. They are very inspired and it was unbelievable to me to see people who are in the Army who just a few short days before were truck drivers and school teachers. One guy sold fishing aquariums.”

Turner said now these same people are running one of the biggest outside supply chains who are sending supplies to Ukraine. He was astonished at how these Ukrainians had taken so quickly to assisting in defending their country.

Father Vasyl said the horrors of war affects everyone. Russian families are also not immune to the ongoing war.

“We should also be praying for the mothers of the Russian soldiers,” Father Vasyl said. “Many of them went missing and their families don’t know where they are. We all need to pray very hard. Because it looks like this is going to be going on a long time.” 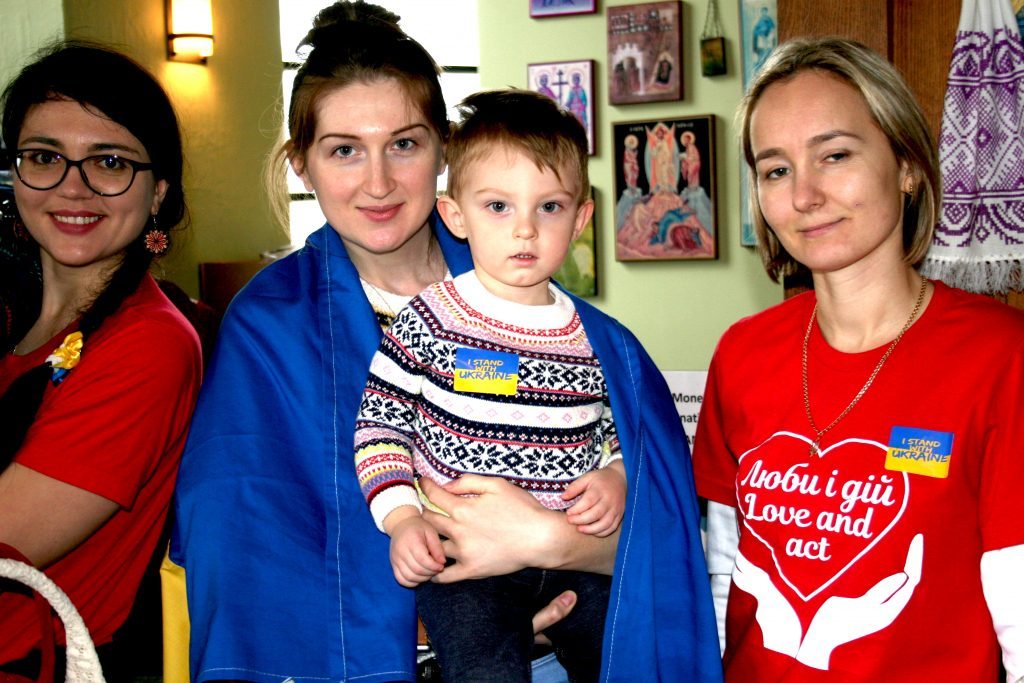 Members of the Chicago branch of the Ukrainian National Women’s League of America 140 were on hand at Sts. Peter and Paul Ukrainian Orthodox Church in Palos Park to collect clothes and monetary donations to assist Ukrainian refugees. Collecting the donations from the organization were (from left) Anastasia Tur, Kateryna Avetisyan, who is holding her son, David, and Alla Saranchuk.