Skip to content
March 27, 2022/Comments Off on Police close in on girl’s killers

Police close in on girl’s killers

Police have released surveillance video which they say shows three suspects wanted for questioning in connection with the slaying of a 12-year-old girl on her birthday.

The video, a compilation of several cameras mounted at several Chicago Lawn homes, shows three men walking in the 2300 block of West 72nd Street at 7:48 p.m. Tuesday, March 1. They then open fire, hitting Nyzireya Moore in the head as she napped in her family car nearby. 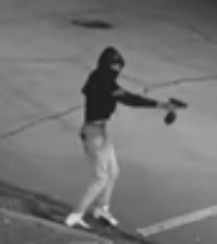 An image of one of three gunmen wanted for questioning by police. –Screenshot of a CPD compilation video

Anonymous tips may be submitted to cpdtip.com.

Police said the fatal bullet was stray, and the child was not the intended target. After she was shot, Nyzireya was taken to Comer Children’s Hospital, where she died on Friday, March 4.

Those with useful information to share may also contnact Cook County Crime Stoppers at 1-(800) 535-STOP.

“When calling the 800 number, a personal reference code will be given for the information you provide, and this reference code must be mentioned when reporting your tip,” said CCCS Chairman George McDade.

Tipsters may be eligible for a cash reward up to $1,000 (good for 60-days) for information leading to an arrest of those responsible for the crime.