Skip to content
April 1, 2022/Comments Off on Serving more than ice cream 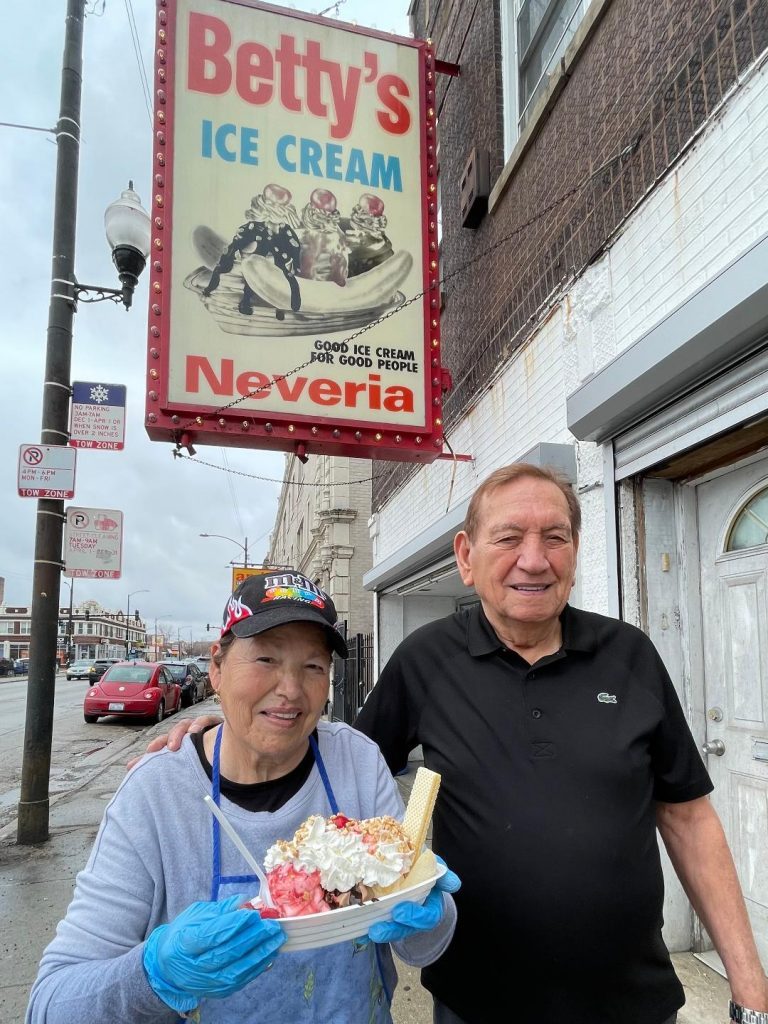 Betty’s is a labor of love

Boys and girls thrilled to see the seasonal reopening of Betty’s Ice Cream, 5840 S. Kedzie, are most likely unaware that behind their favorite ice cream cone, sundae or other frozen treat is more than a half century of love.

It was February 1967 when Juan González walked into a Pilsen restaurant and met the woman who would become the love of his life.

Beatriz “Betty” González was working as a waitress. Juan, a customer seated in her section, said it was love at first sight and asked her out on a date. 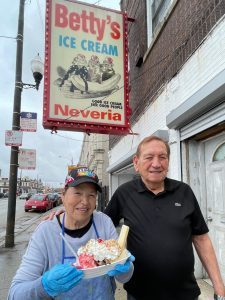 Juan and Betty González on the sidewalk in front of the shop. They are a sight that thrills boys, girls and ice cream lovers of all ages. Despite their age, they say they have no plans to retire. – Photos by Kelly White

“It was all very old-fashioned,” said Juan, now age 82. “But I had to ask her father for permission first, to date her.”

Eight months later, the couple was married. Since then, the “inseparable lovebirds” (as they are described by their daughter Betty Jr.) have spent their lives side by side, living and working together.

The couple opened Betty’s Ice Cream, 5840 S. Kedzie, (named after Betty, of course) more than 30 years ago. It has grown from an unassuming small business to a neighborhood favorite.

“I love everything about working here,” said Betty, now age 73. “We enjoy serving our customers on a daily basis and just making people happy. Seeing a smile on their faces makes it all worth it.”

Despite their age, Betty and Juan have absolutely no plans for retirement.

“This is my life,” Juan said. “It’s not only my work, it’s my hobby. It’s something to do and something that I love to do.”

“My parents have always been such an inspiration,” said their daughter, Betty Duenas. “They are both so hardworking and dedicated to bringing joy to others through their love of ice cream.”

Both Juan and Betty came to the United States in 1967, prior to meeting, from Mexico. Juan, who started out in the United States by working at the old Central Steel & Wire near 51st and California, realized that was not his life’s calling. He knew he wanted to open his own business with his wife, a place where they could be their own bosses.

That’s exactly what they did. 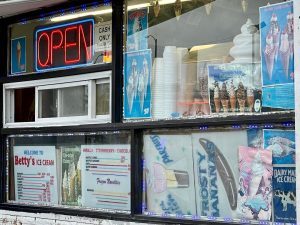 Thanks to a neighbor who sold their business to Juan and Betty, they were able to take over the Yummy Yummy’s ice cream shop in Pilsen for 16 years.

“We were trained thoroughly,” Betty said. “Back in the day, we even used to go to McCormick Place for training.”

In the 1980s, Juan and Betty opened their current location. They even moved in, living above the shop on Kedzie. “They work hard and have no intention of ever quitting,” Duenas said.

“They work from noon until 9 or 10 at night. Those are long days and long hours, and they absolutely love it. Serving ice cream to the local community is something that brings them great joy and satisfaction, just seeing the smile on someone’s face when they are handed an ice cream cone.”

During the course of their ice cream careers, they also had three children: Betty Duenas Jr., 52, Jesse González, 53, and Andrea Duenas, 46. 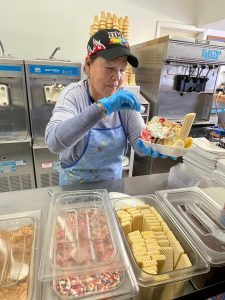 “We used to help our parents out at the shop when we were children, and sometimes we still do over the summer during the extremely busy season, but they insist on doing everything by themselves,” Betty Duenas said. “It’s their shop and they take great pride in that. They are happy; they feel good. This is what keeps them motivated and active.”

The elder Betty had a breast cancer scare 18-months ago, but Betty and her husband refused to let that affect their work. Betty underwent four months of chemotherapy, a month-and-a-half of radiation and had her left breast removed, all the while, her family remained extremely positive, while the couple took a year off from the shop for Betty’s treatments.

“I took my mother to all of her appointments and she stayed optimistic,” Duenas said. “My dad stayed by her side the entire time. They prayed to God. My dad was hopeful and felt she would get better.”

Now, Betty lives cancer free and said she feels stronger than ever.

“I feel really good and I’m happy to be back at Betty’s Ice Cream,” Betty said.

Betty said she is happy to have the shop open again this year, from March until October, for another year of delicious frozen treats.

Juan and Betty do all they can to keep prices low and have been known not to turn away people (especially kids) who don’t have enough money in their pockets. For the couple, it is all about sharing the love.

“They feel bad and would never turn anyone away,” Duenas said. “If someone really wants ice cream and doesn’t have enough money, they will say, just take it or pay us next time.”

Running a nevería with a motto of “Good ice cream for good people,” Juan said Duenas is right.

“It’s all about the customers,” Juan said. “We love them and we love our job. There’s no place we’d rather be.”