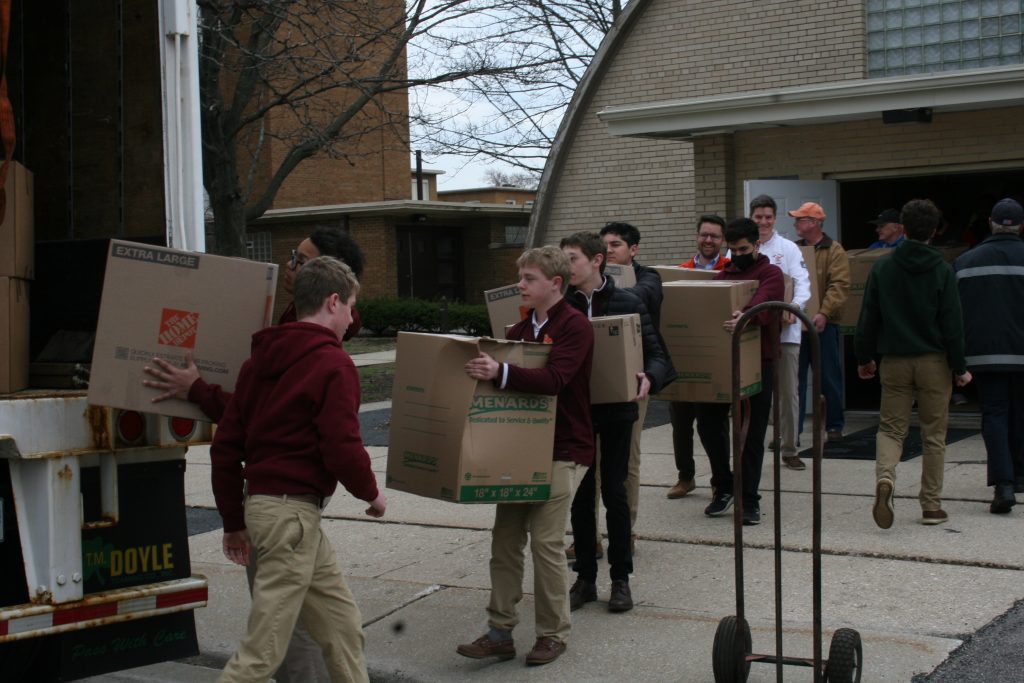 Brother Rice High School students help carry boxes of supplies outside St. Bernadette Parish in Evergreen Park that will eventually be sent overseas to Poland to assist the residents of Ukraine, many of whom are homeless due to invasion of their country by Russia. (Photos by Joe Boyle)

The Rev. Benedykt Pazdan did not hesitate to act after Russia invaded Ukraine.

“Yes, I thought about it right away,” said Pazdan, who is the pastor of St. Bernadette Parish in Evergreen Park. “We had to open up our hearts and minds. This is wonderful. The people who are here wanted to help.”

Parishioners, members of the Evergreen Park Fire Department, Brother Rice High School students and St. Xavier University football players were on hand on the morning of March 30 to load nearly 650 boxes of medical and survival items for Ukrainian refugees.

The volunteers began collecting the items that had been stored in the Quonset hut at St. Bernadette Parish, 9343 S. Francisco Ave., to be put on a truck to later be sent to Poland. 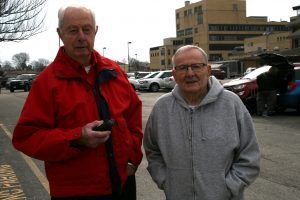 Bill Schmitz (left), a St. Bernadette parishioner, and his friend, Frank Latek, were on hand as volunteers filled a truck with boxes of supplies that will be sent to Poland to assist Ukrainian refugees. Both parishioners said Fr. Benedykt Pazdan, the St. Bernadette pastor, has been an outstanding leader.

It took well over an hour to collect the supplies, just before a steady rain began to fall. The parish has partnered with Rotary District 6450, which has a warehouse in Aurora that can receive, organize and transport all donations to the border of Poland and Ukraine.

After Vladimir Putin ordered the Russian army to invade Ukraine on Feb. 24, Pazdan said he wanted to assist the Ukrainian refugees immediately.

The pastor said during a recent Evergreen Park Village Board meeting that Rzeszow, the capital of the southeast province of Poland, is near the village where his parents live and where he grew up. Pazdan said that he began his seminary studies in Rzeszow before arriving in the U.S.

“One of my classmates is now the director of Catholic Charities of the Diocese of Rzeszow,” Pazdan said. “It helps that I know someone there. It also helps that I have a personal connection with a trusted organization that will make sure all donations go straight to the right cause.”

Pazdan said that Ukrainian refugees should receive the supplies within 10 days.

Parishioners of St. Bernadette have raised $55,000 in cash donations and combined those funds with $70,000 raised by parishioners at St. Francis of Assisi Church in Orland Park to benefit Catholic Charities in Rzeszow.

Pazdan said he was overwhelmed at the response by parishioners who donated over two weekends this past month.

Pazdan said that he remembers life in Poland during the days of the Soviet Union.

“I was 9 years old when the Soviet Union collapsed,” Pazdan said. “I remember before standing in line at 4 a.m. for sugar. I was a member of a family of 13. You could have money, but there was nothing in the stores. So, I have some idea what these people are going through. That’s why I’m so happy that these parishioners have given so much.”

Evergreen Park Fire Chief Ron Kleinhaus said that they wanted to help Pazdan in his effort to provide for Ukrainian refugees. 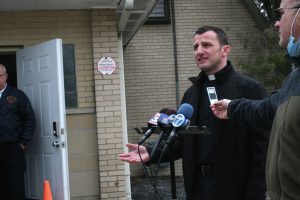 The Rev. Benedykt Pazdan, pastor of St. Bernadette Parish in Evergreen Park, talks to the press on March 30 before volunteers began loading boxes on a truck. The items will eventually be sent from an airport in Aurora to Poland to aid Ukrainian refugees.

“Anytime we can come out to help that’s what we’re here to do,” Kleinhaus said. “We wanted to help Fr. Ben, who is our chaplain. He comes out for us many times.”

Matt Prunckle, the dean of student life at Brother Rice, was in total agreement.

“It’s a big world, but you can have a great reach in just being able to lend a hand and step up when called upon,” he said.

Bill Schmitz has been a parishioner for over 50 years at St. Bernadette.

“We have so many people in this parish who are so generous,” Schmitz said. “Our pastor has so much energy. He is a people person.”

Dorothy Briestansky, a parishioner at St. Bernadette since 1981, said that everyone would do anything for Pazdan. Providing relief for Ukrainian refugees was something parishioners wanted to do, Briestansky said.

“A lot of people want to do more for father,” said Briestansky, who has been a member of several organizations and has served as a eucharistic minister at St. Bernadette. “He is such a great guy. He’s got good Polish blood. It was a natural thing for us to do.

“You know it can happen here,” Briestansky added. “People just don’t realize it.”

As for Pazdan, he just wants to do what he can.

“We’ve all witnessed what’s been going on in Ukraine,” Pazdan said. “These are horrific atrocities committed against humanity. It broke my heart to see so many women, children, people dying. I wanted to help somehow.”

Other local parishes provided supplies and monetary donations. Most Holy Redeemer and Queen of Martyrs parishes in Evergreen Park contributed, along with Christ the King and St. Cajetan in Chicago.

“It was a great response — and quick,” said parishioner Joyce O’Brien.

Pazdan hopes that the war ends soon. However, if it continues, he will seek donations and supplies for the refugees.

“Everybody gets charged up in the beginning but we have to keep it up,” Pazdan said. “But if the need continues, then we will continue to seek donations. The beauty of this is everyone wants to help out.” 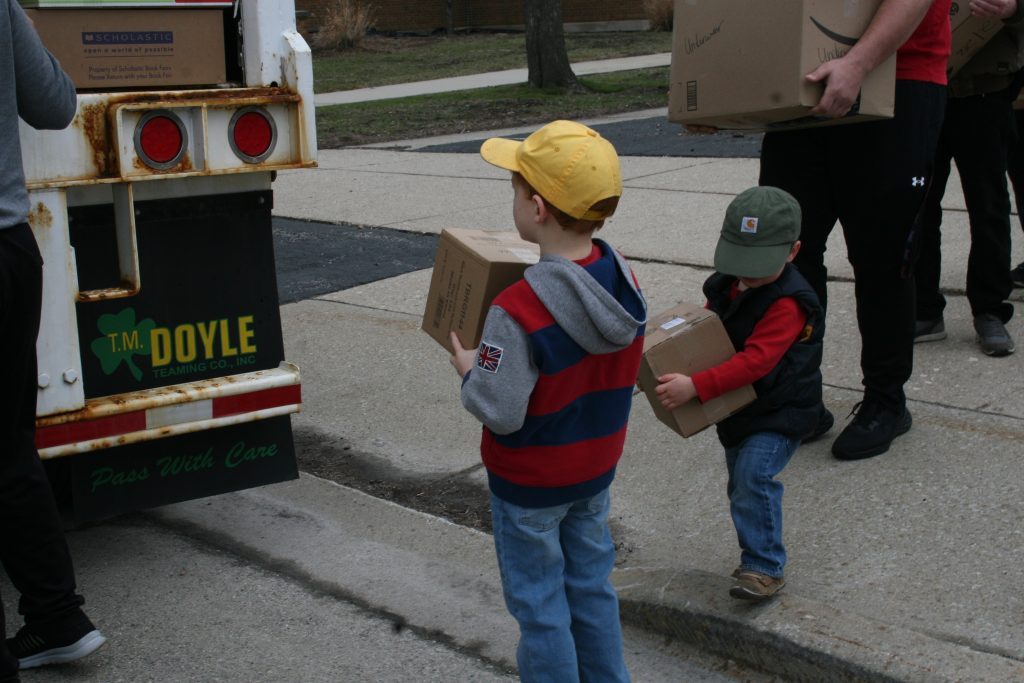 Volunteers of all ages — including these two boys — assist in carrying boxes of supplies to a truck outside St. Bernadette Parish in Evergreen Park. The supplies will eventually be sent to Poland to be distributed to Ukrainian refugees.