April 10, 2022/Comments Off on Pro Soccer Report: Fire II gets a point, but still no goals after three games 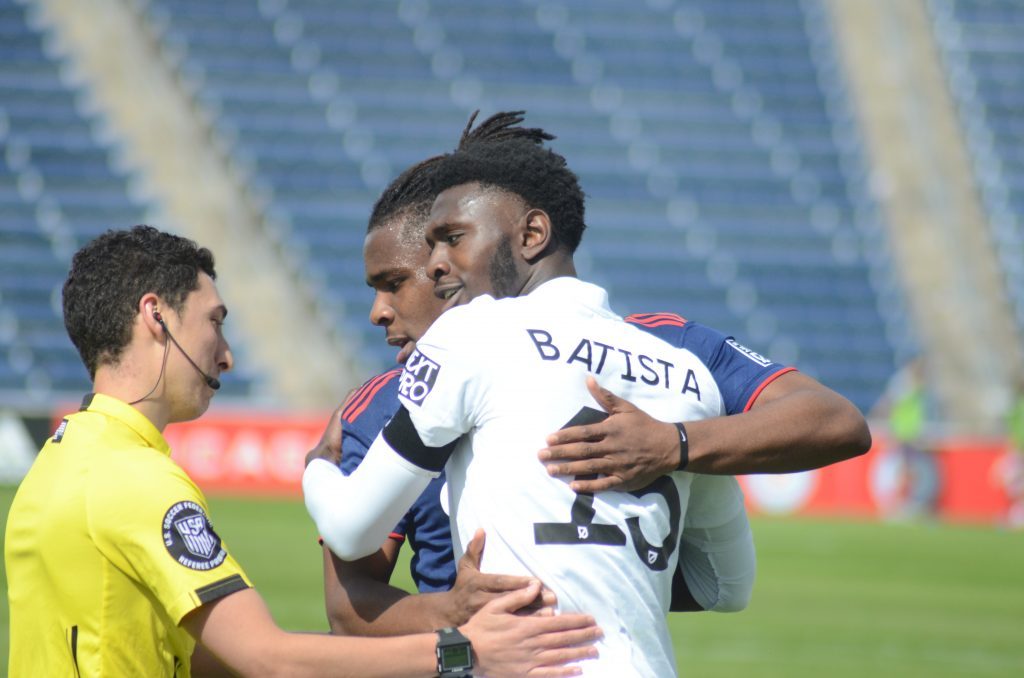 Chicago Fire II player Chinoso Offor (left) and Rochester’s Lamar Batista make nice in front of an official after they were jostling and shoving for a few minutes during the teams’ 0-0 tie on Sunday in Bridgeview. Photo by Jeff Vorva

Pro Soccer Report: Fire II gets a point, but still no goals after three games

The new Chicago Fire II team is winless and scoreless through three games, but coach Ludovic Taillandier knows wins and losses are not the team’s main focus.

The Fire II, which tied Rochester 0-0 April 10 at SeatGeek Stadium in Bridgeview, is a mix of youth and Chicago Fire players who need to get work in.

“When I speak about this team, we have three objectives,” Taillandier said. “The first objective is to give time of play to the players that are in the MLS group, so those players get some time of play at a good level and they can stay in shape for when we need them with the first team. The second objective is to develop the young players and to give them some room to prove themselves … to get to a first professional contract.

“And the other one is to play each game to win it. On this third objective, we want to do better. We expect to be a little more competitive on the field and to be able to score goals.”

Through three MLS NEXT Pro games, the Fire II are 0-2-1 and have been outscored 3-0. On April 10, they picked up the first point in team history, but lost, 6-5, in a shootout for an extra point.

First-team goalie Chris Brady had a clean sheet in regulation with two saves, but Rochester (0-2-1, 2 points) scored six goals in seven attempts in the shootout.

“This year with it being a new rule, ties go to PK shootouts. It’s something that we’ve had to work on a little bit more obviously, myself included,” Brady said. “I haven’t faced many, but it’s a good chance for me, bring the game down, calm, and make sure that it’s just me and the next shot. So going into that PK shootout, I felt good. I felt like I had a clear mind.

“Obviously, during the game, during the run of play, we’d look for hopefully a few more goals, but it’s definitely challenging. It’s my bread and butter. I like it.” 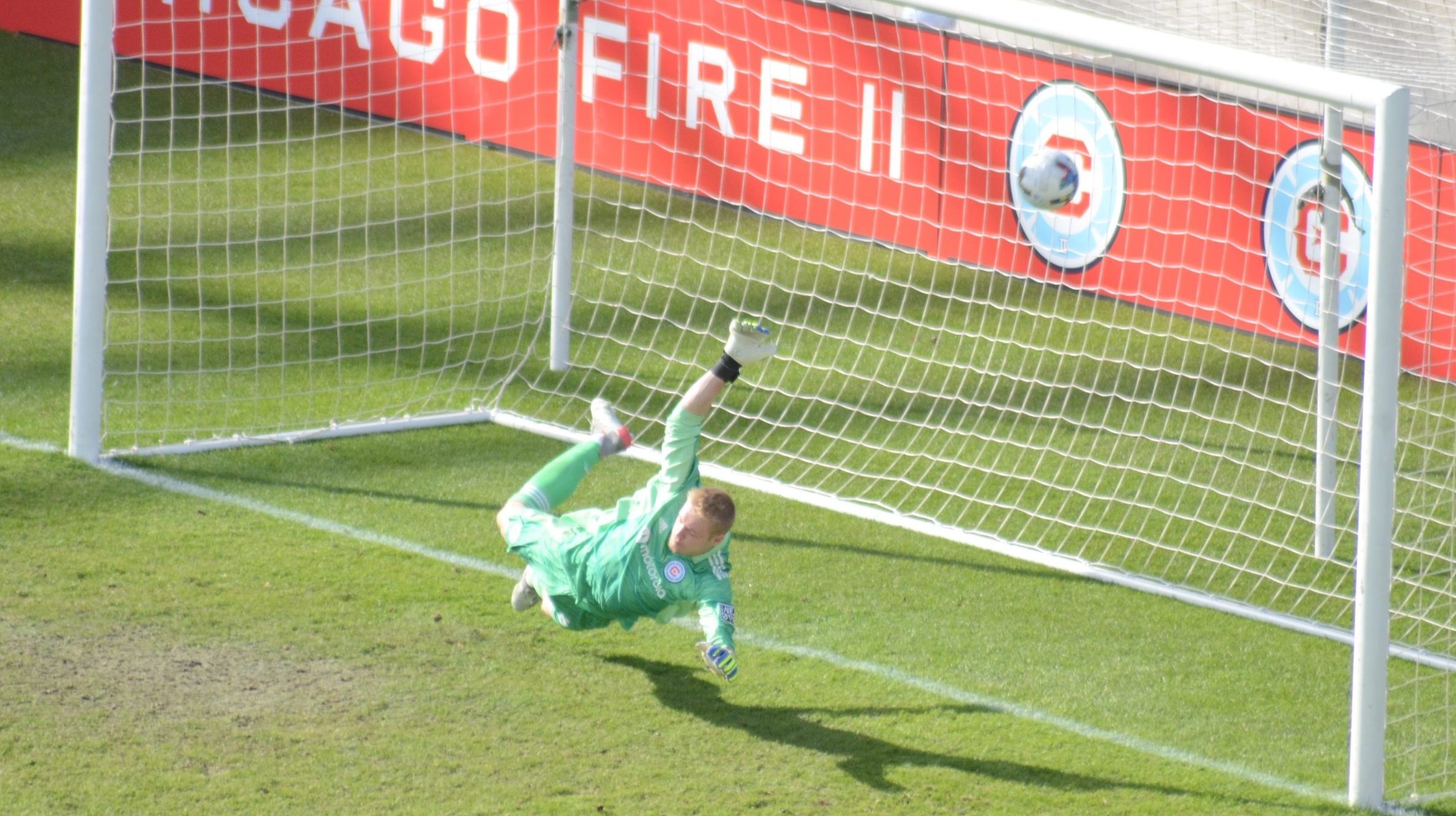 Fire II goalie Chris Brady twists and dives in the shootout with Rochester on Sunday at SeatGeek Stadium. Photo by Jeff Vorva

If she scores goals, the team should consider playing “Chelsea Dagger” for Australian import Chelsie Dawber, 22, whom the Red Starts inked to a two-year deal with a third-year option.

“Chelsie is an impressive young player,” Red Stars coach Chris Petrucelli said. “She has proven she can score goals at a high level, play multiple positions and still be effective. She adds versatility and athleticism to an already dangerous attacking group.”

Dawber, a forward, played 15 games for Adelaide United FC of the Australian A-League Women and accounted for 10 of the club’s 33 goals. She also had three assists and helped lead the team to the A-League semifinal round.

“I am really excited to be joining the Red Stars,” Dawber said in a news release. “Growing up it has always been my dream to play overseas. I am very grateful to Chris and the team for providing me this amazing opportunity.

“I can’t wait to start training with the girls, playing in front of all the fans and push towards winning a championship this season.”

Dawber’s arrival is dependent on approval of her visa application.

The Red Stars also signed Amanda Kowalski to a three-year contract with a fourth-year option.

The Arlington Heights native joined the Red Stars this preseason as a non-roster invitee out of Butler University. While at Butler, Kowalski played in 72 matches with 46 starts, scored four goals and assisted on 11 others.

Kowalski’s signing was made following the season-ending injury to star defender Tierna Davidson. Kowalski earned her first start with the Red Stars April 2 against the Houston Dash. She played all 90 minutes and completed 80 percent of her passes, and made two key stops to help the team earn a clean sheet.

There were no Red Stars games last week because of international play, but one Chicago player still made an impact.

Mallory Pugh, who has four goals for the Red Stars in Challenge Cup play, scored a goal and added three assists in the U.S. Women’s National Team’s 9-1 friendly victory over Uzbekistan in Columbus, Ohio, on April 9.

The Chicago House, which played its debut season at SeatGeek Stadium in 2021 has moved. The team will play its games at the Illinois Institute of Technology’s Stuart Field in Bronzeville. The home opener is May 13.

Here are the remaining Chicago Fire II games to be played at SeatGeek Stadium in Bridgeview. Games are free and gates open an hour before the listed starting time: 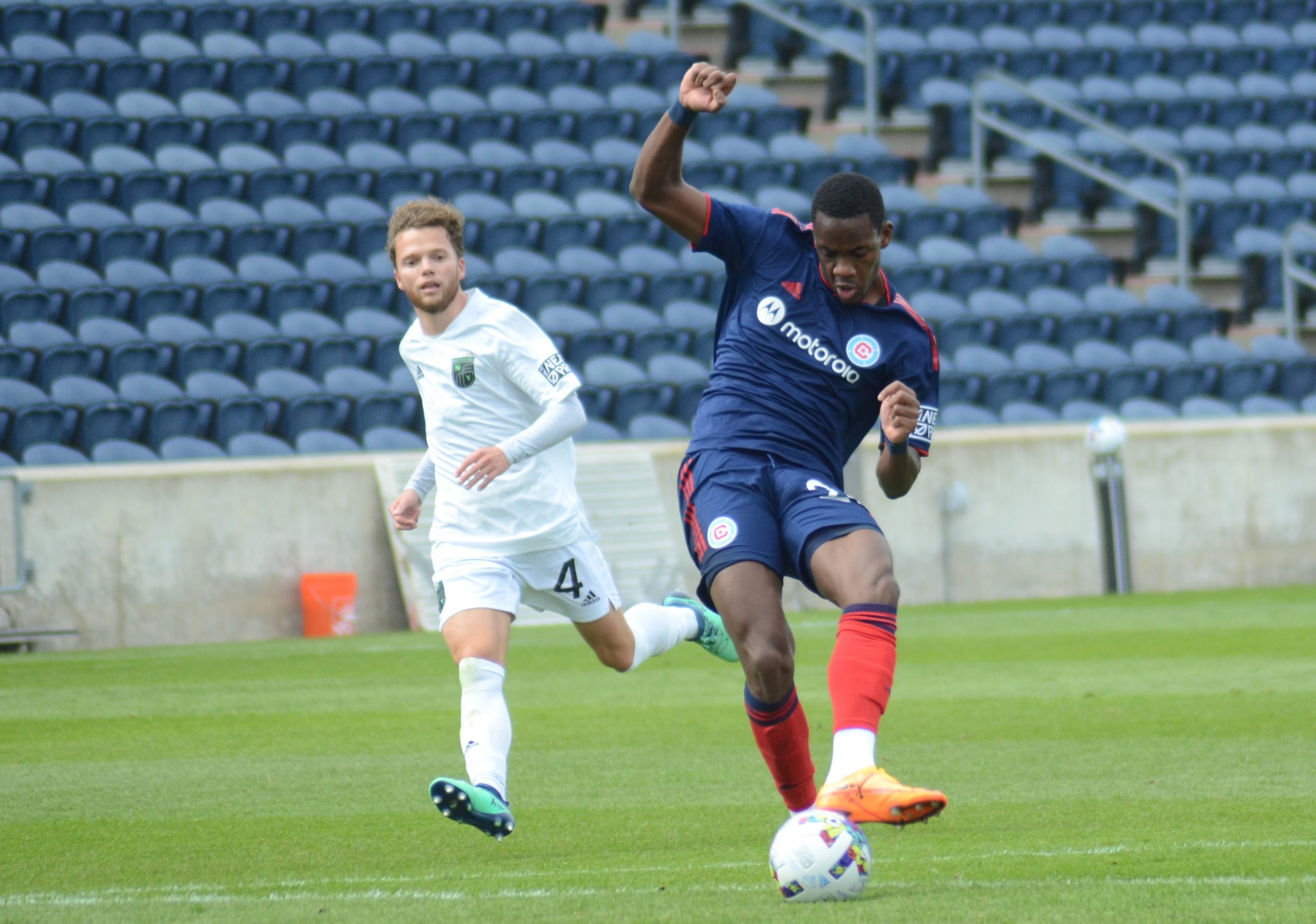