April 12, 2022/Comments Off on Cudney honored by Orland Park for raising money for Ukraine 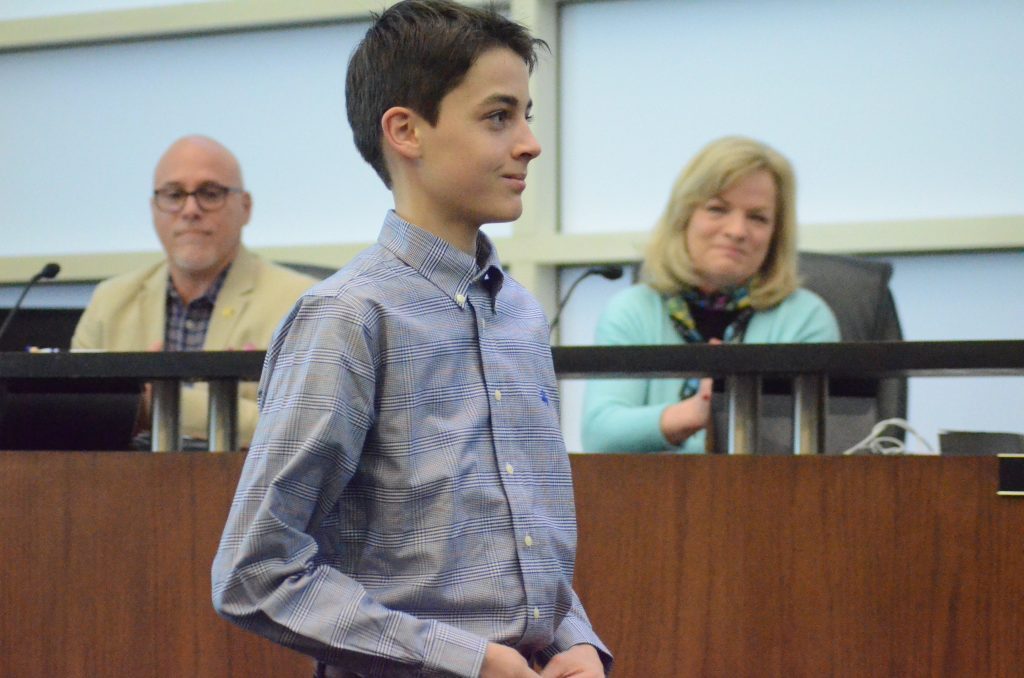 Orland Park's Luke Cudney was honored at a village board meeting for raising money for Ukraine. (Photo by Jeff Vorva)

Cudney honored by Orland Park for raising money for Ukraine

Eleven-year-old Luke Cudney is a home-school student in Orland Park who learned a little bit about making pottery via a video class.

Little did he know that it would lead him to being honored by the Village of Orland Park trustees and Mayor Keith Pekau.

Pekau presented Cudney with a Community Pride Award at the April 4 village board meeting because Cudney turned his pottery-making ability into a money-making venture for charity.

Cudney raised more than $500, which was donated to the village to help refugees from Ukraine after their country was invaded by Russia. The village used the money to help pay for shipping of a truckload of supplies that village residents donated in March.

Trustee Cynthia Nelson Katsenes was moved by Cudney’s generosity and said, “You are a shining light tonight.”

Even before the pandemic, Cudney had a strong resume of charity work. He and his father, Nick, took a trip to El Salvador to do mission work, painting schools and building beds for orphans.

And Luke got the family involved with the Ukraine project.

His mother, Sarah, bought supplies and clay while his younger brothers, Levi and Graham, helped make and sell the items.

Some of Orland Park’s parks will go through some major face-lifts in the coming years including massive projects at Schussler Park and Centennial Park West, but there will also be smaller projects and improvements the board approved at the April 4 meeting.

At Breckenridge Park, the bocce ball court will be removed.

At Spring Creek Park, there will be a new tennis court and half-court basketball court installed.

At Sunny Pine Park, look for a half-court basketball court to be installed.

At Treetop Park, there will be a new fenced-in tennis court built with capabilities for pickleball. There will also be a new half-court basketball court built and the removal of the inline hockey rink.