Skip to content
April 13, 2022/Comments Off on ‘A day of enormous consequence’ 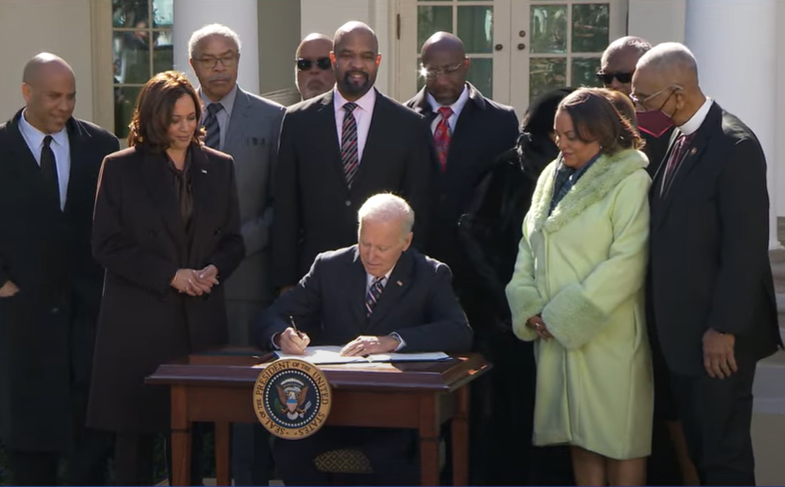 ‘A day of enormous consequence’ 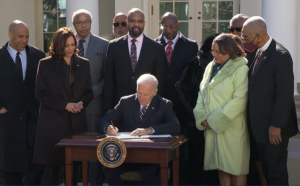 The act designates lynching as a federal crime — specifically, a federal hate crime — for the first time in U.S history and defines lynching as a conspiracy to commit a hate crime that results in death or serious bodily injury. More than 6,500 Americans were lynched between 1865 and 1950, according to a recent report from the Equal Justice Initiative.

Rush, who stood near Biden as the act was signed, offered comments.

“This is a historic day and a day of enormous consequence for our nation,” he said. “After more than 100 years and 200 attempts, lynching is finally a federal crime in America. When I think of what this means — that we can finally provide justice for the victims of this heinous act; that we will be able to reckon with our nation’s legacy of lynching; and that we will, once and for all, send a strong message that we will not stand for these abhorrent crimes — I am elated.

“The enactment of my bill means that the full weight and power of the United States government can be brought to bear against those who commit this vicious crime,” Rush continued. “We will no longer face the question of if a perpetrator of lynching will be brought to justice — with the President’s signature today, we have eliminated that possibility moving forward.”

Rush said he was eight years old (in 1955) when his mother put the photograph of Emmett Till’s brutalized body that ran in Jet magazine on their living room coffee table, pointed to it, and said, “This is why I brought my boys out of Albany, Georgia.” Rush said seeing the photo “shaped my consciousness as a black man in America and changed the course of my life. 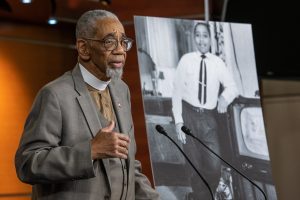 “I am thinking of Emmett Till, who would have been 80 years old today,” the congressman added. “His brutal lynching ignited the civil rights movement and a generation of civil rights activists. It had a ripple effect that we still feel today; it began a worldwide movement to reckon with freedom, justice, and equality all around the world.”

The Emmett Till Antilynching Act first passed the House of Representatives during the 116th Congress — in February 2020 — with overwhelming bipartisan support but was blocked in the Senate. Rep. Rush reintroduced the Emmett Till Antilynching Act on the first day of the 117th Congress and worked closely with the House Judiciary Committee and the Senate throughout the past year to reach agreement on the text of the legislation.

H.R. 55, the legislation that was signed into law today, differs from the antilynching legislation passed during the 116th Congress in two primary ways: