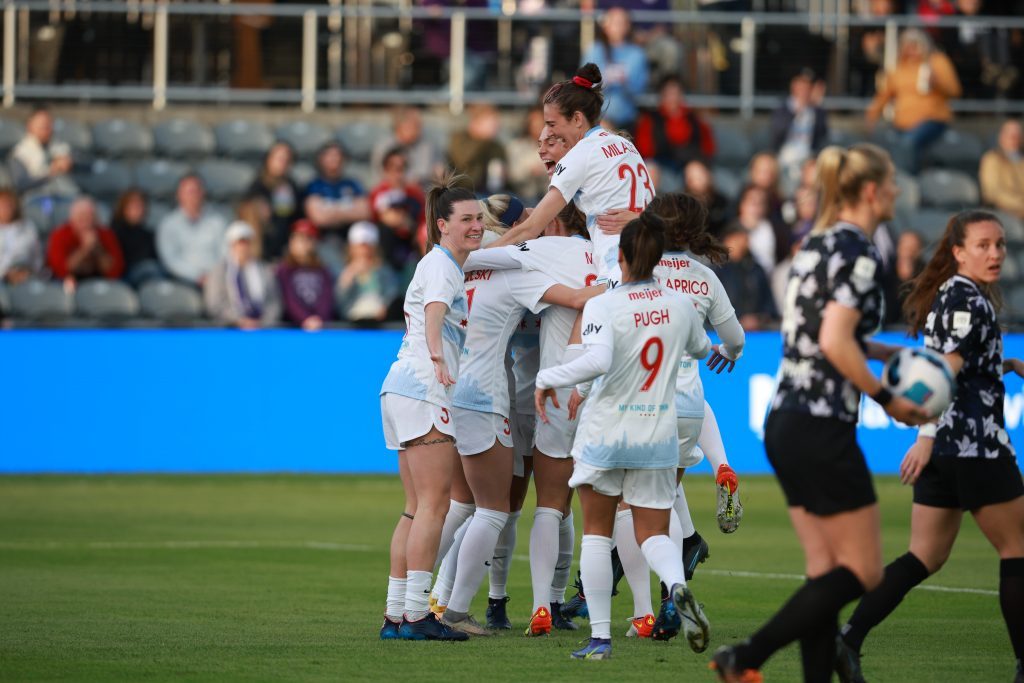 Orland Park’s Tatumn Milazzo is high on the top of the pile for the celebration of the Red Star goal by Amanda Kowalski Saturday against Racing Louisville. Photo courtesy of the Chicago Red Stars

The Chicago Red Stars have put themselves in a great position to make it to the semifinals of the Challenge Cup.

But is that a good thing?

The Red Stars tied Racing Louisville, 1-1, on the road April 16. A victory at Kansas City this Saturday would mean a trip to the Final Four of the pre-season tournament.

But there is a flaw. With the strange scheduling of the semifinals and finals taking place May 4 and May 7, respectively, those matches come after the opening of the NWSL regular season.

So, if the Red Stars get into the Final Four, things can get a little busy.

First-year Red Stars coach Chris Petrucelli has seen some good and bad in the long preseason with the elongated Challenge Cup.

“I think if you make it all the way to the final, playing seven matches is a lot this early in the season,” he said. “That semifinal and final in the first week of the season is going to be difficult for whoever is in it.

“I would like to see it completed before the season starts as opposed to bleeding into the regular season. It’s also made for a very long preseason period. The players started training the first of February. We’re going to get to May 1 and it [will not have been] completed yet.”

But there are some good things the new coach found with the long preseason.

The two teams also tied 0-0 on April 2 at SeatGeek Stadium in Bridgeview.

“The first match, both teams were heavily rotated,” Petrucelli said. “It was in the middle of three matches in seven days. Some players played limited minutes on both sides. This match may be a little bit more of an indication of what both teams are.”

And they will face off again in the season opener April 30.

Pressure?
Petrocelli said he is not letting last year’s success put pressure on this year’s team.

With a new coach and some familiar faces gone, this is a different team and expectations should be realistic.

“I don’t think we look at it and compare it with last year,” he said. “I think we’re going about it trying to play one match at a time and try to play the best that we can play.

Fire II scores but falls
The Chicago Fire II scored its first two goals of the season, but the defense had a long day in a 4-2 road loss to Toronto FC II in an MSL NEXT Pro battle on Easter Sunday.

Alex Monis became the first player in Fire II history to score as he put in a header in the fifth minute. Josh Penn picked up the assist.

“It was an important step, for sure,” Fire coach Ludovic Taillandier said of finally scoring. “We promote an attacking style of play and that’s a good result in terms of attacking. But, of course, we are not really happy with the way we defended as a unit. We conceded too many goals.

“We need to do better defensively.”