April 20, 2022/Comments Off on Palos Park chills out at annual Chili in the Park 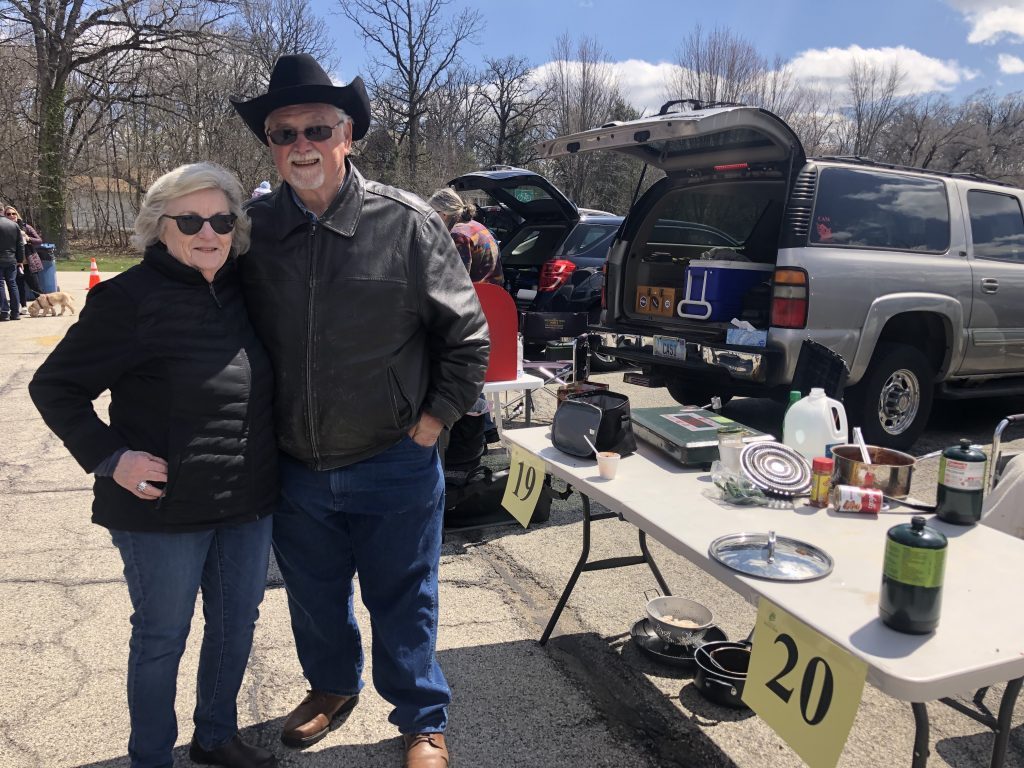 Former Homer Glen residents Mike and Gloria Stevens came back from their New Mexico ranch to compete in the Chili in the Park competition in Palos Park on April 16. (Photos by Dermot Connolly)

Palos Park chills out at annual Chili in the Park

Chili in the Park was the place to be on Saturday, where scores of people warded off the brisk wind by sampling what was in all the simmering pots.

The annual Palos Park event at the Recreation Center, a tradition since the 1990s, drew 20 contestants from the Midwest and beyond in search of trophies and recognition of their culinary skills. The cook-off is sanctioned by the Chili Appreciation Society International, and many participants have made it a regular stop on their tour of similar contests that lead up to the world championships in Texas each year.

“It is a fun, community event. A lot of people look forward to it,” said Sally Kinney, assistant to the mayor and village manager, as she and other village staff handed out cups and spoons to people who paid $5 to sample the chilis and cast votes for the People’s Choice. 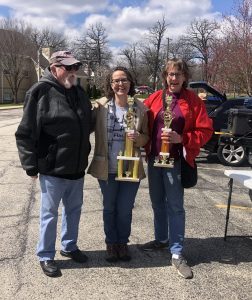 Most of the flavorful chilis seemed to be the traditional variety, without beans, with a wide range of spiciness,

“A lot of people look forward to this every year. But we weren’t sure it was going to happen until at least 15 participants signed up to make it an official CASI event,” Kinney explained.

“It’s really nice for the community to do. We’ve been coming since we moved to Palos Park three years ago,” said Alan Holdsworth.

“It was indoors last year because of the weather. So, it is nice to have it outside again,” added his wife, Donna. “We’re from Evergreen Park, and we enjoy seeing all the wildlife here, too.”

Palos Park residents Mike Gallagher and his daughter, Molly, with her dog, Hank, were also happy to see the cook-off back on the village calendar.

“Molly really loves the chili, and it is a great community event,” said Mike.

Mike and Gloria Stevens began competing at Chili in the Park—each with their own pot—when they lived in Homer Glen. They retired to a ranch in New Mexico, but still come back to Palos Park for the event, where they know they will meet longtime friends.

Mike Stevens won the 2014 World Championship held in Texas, which he didn’t mention until his competitors pointed him out. Gloria placed ninth on Saturday.

Awards were given out for showmanship, too, with Timothy Hoffman of Oxford, Wis., winning first with his TNT Chili, followed by Kristen Donhert of Lindenhurst, and Debra Hunt of Markham in third.

It was a big day for Donhert, whose “Kristen’s Cauldron” chili also placed third in the overall competition.

““The goal is to get into the top 10,” said Donhert, beaming as she carried around her third-place trophy and congratulated everyone else.

“I did win the People’s Choice Award once, but this is the best I have ever done here,” she said. 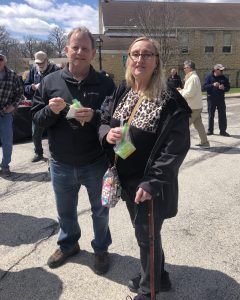 Alan and Donna Holdsworth of Palos Park kept up their tradition of attending the annual Chili in the Park event.

Brian has been competing longer than Kim, who started in 2015.

“I used to only compete if they didn’t have enough. But I’ve been using the same spice combination since I started, and now he uses them too,” Kim said.

“We’ll be fighting when everyone leaves,” he joked.

“It’s a friendly competition but I get to pick the restaurant for dinner,” she added, choosing Pappadeaux’s in Westmont.

“We’re all winners here. You make a lot of friends coming to things like this,” said Marty Apel of Batavia, whose “Gray Beard Chili” won the People’s Choice award, the last prize given out. “This shows people like green chilis,” he noted. His son, Jake, placed seventh in the overall competition.