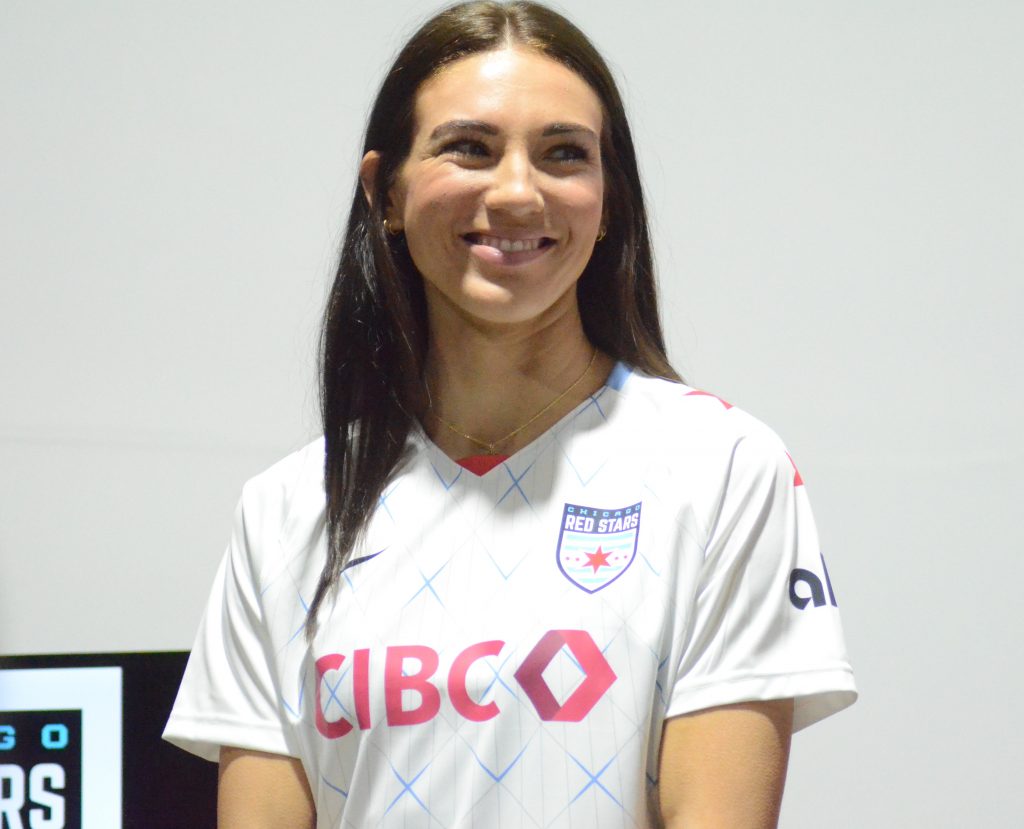 A lot of familiar faces will be missing when the 2022 Chicago Red Stars’ open the NWSL season on Saturday against Louisville, with the match scheduled for a 7 p.m. start at SeatGeek Stadium in Bridgeview.

There is a host of new players and rookies to mix in with some of the veterans still around, including national team star goalie Alyssa Naehar, goal-scoring machine Mallory Pugh and longtime Red Stars standout Vanessa DeBernardo.

First-year coach Chris Petrucelli is going to have quite a diverse array of players from a team that NWSL playoff runner-up in 2019 and 2021 (the 2020 playoff was wiped out by the pandemic).

“We have veterans and a bunch of newbies, which is kind of a good dynamic to have,” veteran defender Arin Wright said. “We have people who know a lot about the league, and we have some people who are eager to learn and are excited to be here. That creates a conducive environment.

“With a new coach, we are trying to find a new identity. Chris has come in and he hasn’t tried to shake too many things up, and he’s letting things unfold slowly. We have a good working relationship with him. We’re at a good place and we’re going in the right direction.

“There comes a time when you have to reinvent yourself.”

That time is now.

One veteran the Red Stars were counting on for leadership but will miss 2022 because of injury is defender Tierna Davidson, a player who is also on the U.S. national team.

Local star and defender Tatumn Milazzo from Orland Park is in her second season and could almost be considered an old-timer given the team’s turnover since last season. She was around last year, working her way from a reserve to a starter, and knows how tough it was to finish in second place to Washington for the title.

“We were so close [to a championship] last year and we’re just trying to get it this year,” she said.

“We haven’t brought the city a championship and that’s something we are striving for,” added defender Kayla Sharples. “We’re working hard for that.”

The team’s new kit features a jersey sponsored by the Canadian Imperial Bank of Commerce and has a skyscraper theme.

“We want to reach for the sky, reach the stars and break the ceiling,” Milazzo said.

Vicky Lynch, the Red Stars chief business officer, is pumped up because season ticket sales at this point are “skyrocketing,” she said. Lynch did not have an official number of tickets sold, but estimated it’s close to 1,000, whereas in the past it was only a few hundred.

“It means a lot to have a lot of fans in the stadium,” Milazzo said. “It motivates us and we want to put on a good performance for the fans.”

One of the home dates the Red Stars are looking forward to is July 30, when they face the new San Diego Wave as a part of a doubleheader with the Chicago Fire at Soldier Field. The game is scheduled for a 7 p.m. start.

“It’s definitely a mark on the calendar for us,” said Sharples, a Naperville native. “In a million years, I would have never thought we would play in Soldier Field. That’s really incredible.

“I’m excited to be able to play in the city. We are Chicago. We’re a Chicago team and to be playing in a fantastic stadium with the lights, the lake, the skyscrapers … it’s going to be great.”

Dames, who stepped down a day after the NWSL title game and before the publication of a Washington Post article in which he was alleged to have verbally abused players, is gone after a lengthy tenure. Many teams in the league had problems with player/coach relationships in 2021, leadng to the postponement of games while the league rebooted to put plans in place for improvement.

The Red Stars put their own plans in place this offseason to enable players to communicate with management if any problems should arise.

“That’s something that is needed,” DeBernardo said. “The players need to feel they are supported.” 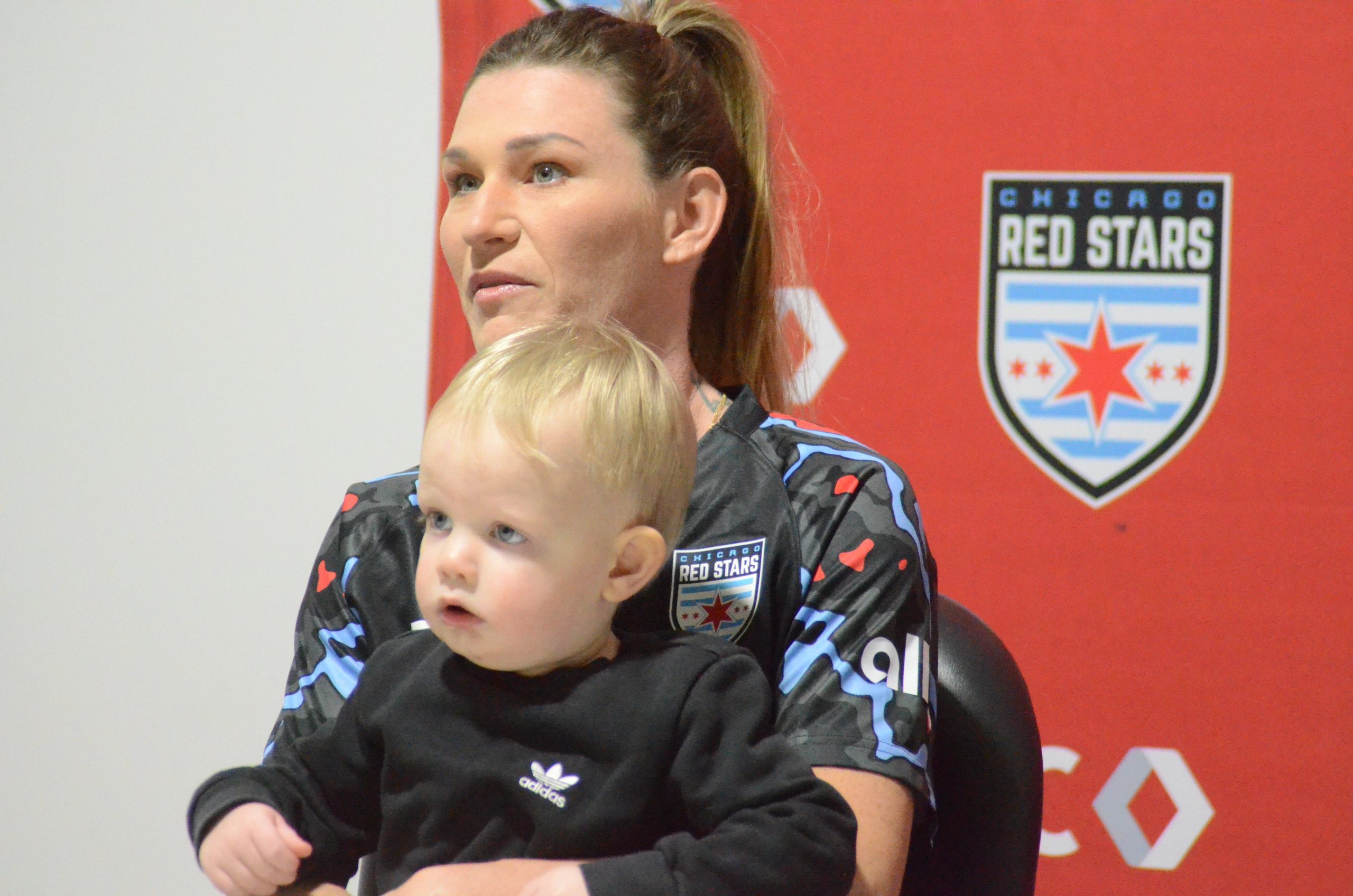 Challenge Cup over for Stars

The Red Stars dropped a 2-1 decision at Kansas City on April 24 and did not qualify for the semifinals of the NWSL Challenge Cup, an exhibition series that lasted all of April and will spill into the regular NWSL season.

Bianca St. Georges scored in the 51st minute — two minutes after KC scored. The home team triumphed thanks to a Kristen Hamilton goal in the 76th minute.

The Chicago Fire II team is still winless but picked up its second tie of the season with a 3-3 draw against the Philadelphia Union II on April 24 in an MLS NEXT Pro game at SeatGeek Stadium.

They earned another point with a 5-4 shootout win.

Chinonso Offor scored a pair of goals including a header during stoppage time to help the Fire II earn the tie.

Chicago’s (0-3-2, 3 points) next game is against Minnesota United FC II on May 8 in Bridgeview.