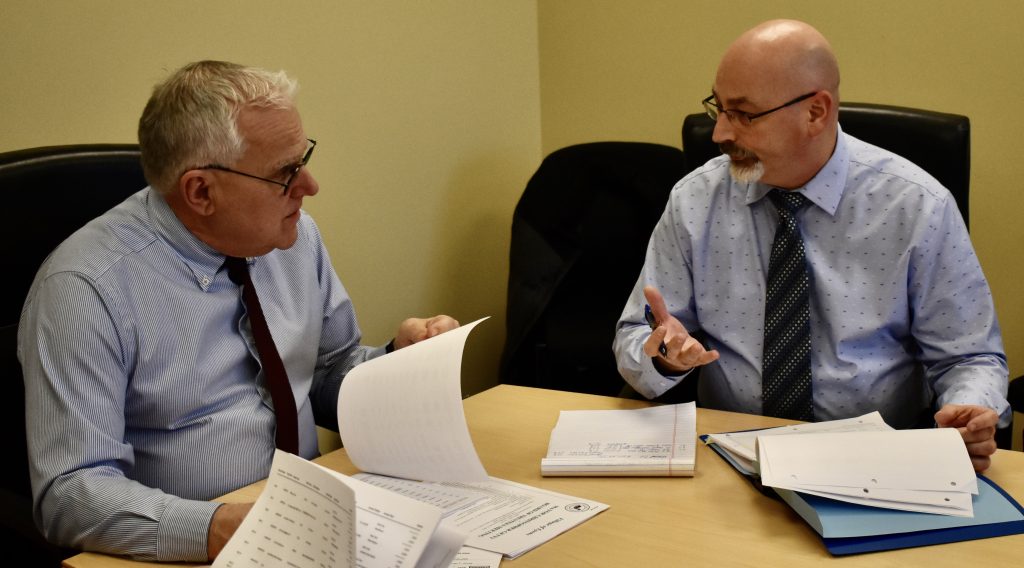 Lyons’ new finance director eager to get to work

So, it’s no surprise he considers his new job the perfect fit.

The next day found him attending meetings of the village board and its finance committee.

Horne formerly worked in the finance departments of Morton Grove and Lake County along with several businesses.

He was itching to return to public service and said his wife Mindy saw an ad in February for the finance director’s job in Lyons.

“She said, ‘Here’s a nice small community, in your wheelhouse.’ I wanted to get back to being a finance director. That’s what I love doing,” Horne said.

He said he “missed the closeness with the community.”

“That’s something you don’t get at a high level of county government,” he said.

“I always think, ‘How would I want someone to treat my mom if she was having an issue or a problem.’ Nothing makes me happier than if I can help someone with their water bill, vehicle sticker, a late fee, and really work with people because they’re so appreciative,” Horne said.

He acknowledged that public servants sometimes get a bad rap.

“It’s not accurate. I’ve worked in public and private,” he said. “I can tell you that people in government work harder than people in a lot of other industries. We squeeze every dime and penny as much as we can.”

Horne replaces Dan Denys, who resigned to focus on finance jobs he has in other suburbs.

“When you follow behind someone who is talented and did a great job, you want to hold up that same standard,” Horne said.

Lyons conducted a nationwide search for a new finance director.

The pandemic offers new challenges for finance directors, he said.

“What’s great about Lyons is the wonderful opportunity with the 40-acre site. It’s going to be a fantastic opportunity. When I was in Morton Grove, I was involved with setting up a couple of TIF districts,” Horne said.

The site he referred to is the former quarry site – now filled – just west of the village hall.

“You’re going to have developers. They’ll do proposals. You’ll get the images and designs and you’re going to see something you hadn’t thought of,” Horne said.

“The number one reason we were attracted to him and ultimately offered him the job is his extensive experience,” Getty said.

“We did not want to bring in somebody to the finance director position that didn’t know what they were doing and didn’t have the capacity to do the job on Day One.”

“He exceeds that level of competence. He knows exactly what he’s doing, the exact direction to go. And he’s comfortable in the job. That’s what stood out to us,” Getty said.

Horne was sworn in by Village Clerk Irma Quintero during the April 19 village board meeting.

Horne and his wife have two sons and one daughter. Their sons have special needs. Their daughter plans to play college tennis, following her mother’s footsteps.

Mindy Horne – whose maiden name was Weiner – grew up in Morton Grove. She was the state singles tennis champ in Illinois playing for Maine East High School in 1988-89 and 1989-90.

She played tennis at Clemson University, where she met her future husband.

At Clemson, Horne earned a bachelor’s degree in financial management. They moved to the Chicago area and he earned his MB at Northeastern Illinois University in Chicago.

“My perception of Chicago, from South Carolina, was completely different from what I found here,” he said. “A lot of nice, salt-of-the-earth people. Home grown.”

He didn’t realize his future was in finance until his sophomore year at Clemson.

“One day, I was looking through a Forbes or Fortune magazine and I was fascinated with the idea of mutual funds,” he said.

Asked if Lyons did anything special for him on his first day, Horne smiled and said: “Actually, I brought the bagels from New York Bagels & Bialy in Niles.”

A village employee later treated him to lunch.