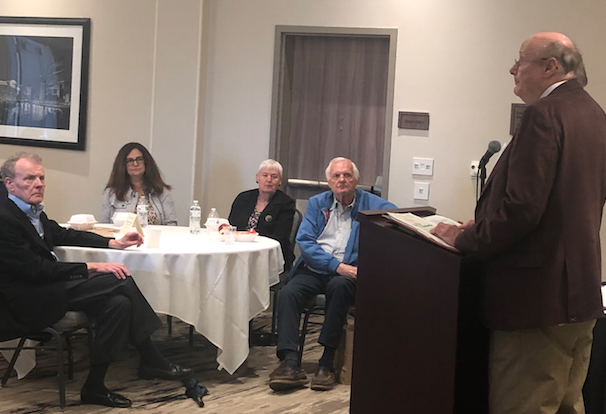 About 30 members of the business organization attended the April 13 lunch meeting at the DoubleTree Hotel on Cicero Avenue, many of whom were pleasantly surprised to see former House Speaker Michael Madigan there too.

“We’ve been working with the city of Chicago to improve Cicero Avenue since 2017. You need to tell us the secret of getting these things done,” said UBAM Executive Director Anita Cummings, when introducing Brady, who has been mayor since 2005. 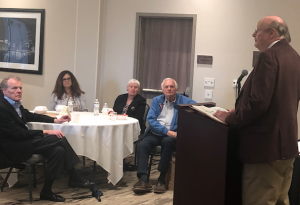 “That year, we realized our industrial base was changing. We still have the largest railroad yard in America and the third-largest in the world,” he said, referring to the Belt Railroad. “We were doing well with the property taxes. But we wanted to bring in more businesses that relate directly to service for people,” he said.

Brady noted that while Bedford Park only has 580 residents and 430 businesses, 250,000 people live within easy reach of the village’s growing amenities, mainly in neighborhoods such as Clearing and West Lawn.

He predicted that work on the long-awaited railroad underpass at 65th Street and Harlem Avenue will begin next year and take about two years to complete.

“That is going to help this area tremendously,” he said, by alleviating traffic back-ups at train crossings.

“We also want to see 67th Street extended from Old Harlem Avenue to Cicero, but it involves some Belt property and won’t be done in the next two years,” he said.

Among the successful developments he cited, were the Magoo’s Bar & Grill at 6550 S. Menard, and the Good to Go gas station at 6401 W. 65th St. He said the bar is popular with Chicago police and firefighters, and the gas station is the biggest video gaming site in the area.

These were followed last fall by the opening of the village-owned Wintrust Sports Complex at 5499 W. 65th St., built on a 32-acre site where the Continental Can Co. once stood. The enormous facility, which UBAM members toured after the meeting, is drawing thousands of people each weekend for basketball, volleyball and other sports tournaments. In addition to a gym with seating for 3,000 and eight basketball courts that can be used for volleyball too, the facility includes an upscale restaurant and bar open to the public Thursday through Sunday, an arcade, and multi-purpose meeting rooms available for rental. Video gaming will also be coming soon.

It has become the go-to place for graduation ceremonies this year, as well as birthday parties and other private events, according to director of operations Jennifer Quinlan, who lives in Garfield Ridge and grew up in West Lawn.

Among the schools using the facility for such events is the newly built Hancock High School, located just across 65th Street in Clearing.

“When we built this, we included a parking lot for use by Hancock High School,” said the mayor. “Ald. Marty Quinn (13th) and Ald. Silvana Tabares (23rd) have been great for us to work with,” he added, referring to the aldermen whose wards abut Bedford Park.

“It is a great addition to the community. It will benefit this whole area,” said Mary Shilney, president of the Clearing Civic League, who was at the meeting.

“I wanted to hear the mayor speak,” said Madigan, explaining why he accepted UBAM’s invitation to attend the meeting.

“We have always had a good working relationship with the mayor and Bedford Park,” said Madigan, citing the village’s willingness to accommodate Hancock’s need for more parking as an example.

“It’s always been difficult to compete against them (when it comes to development) because the approval process in the city takes so long. While a few new restaurants have been built on the Chicago side of Cicero Avenue between 67th and 65th streets, facing Bedford Park, Madigan noted that there is still one piece of property that the city owns but is finding hard to get developed.

Brady said, “One of the goals behind building the Sports Complex was to put heads in beds” at the Midway Hotel Complex, where the meeting was held.

“Hotel business was down, but it is approaching pre-pandemic levels now,” added the mayor.

“None of this development, starting with the hotels, would have been able to be built without tax incentives such as TIFs,” said Brady. “I think Mark (Weglarz) would agree,” he said, as Weglarz nodded.

Weglarz’ late father, Jack, was a founding member of UBAM and headed the family’s development company that built and still runs the hotel complex.

Plans are in the works to add 600 more parking spots in back of the building, in addition to the 500-spot lot in front, as well as a second building with a turf playing surface to attract more business during the week.

“As a village, we also want to look at putting in a small entertainment district, similar to Rosemont,” said Brady. “We think there is a market for it here,” he said.

“We want to continue to diversify but it is not going to happen overnight.”

Brady said the commercial investment in Bedford Park has allowed to the village to improve its housing stock and retain residents.

“A good portion of our 200 homes are more than 100 years old,” said Brady, explaining that Bedford Park started out basically as a company town with homes built for employees of Argo Corn Products.

But 24 new homes have been built by offering residents up to $200,000 to demolish and replace older homes with new ones.

“Mayor Brady provided the membership with a perfect example of our goals by sharing his vision for the economic development of the Midway Airport area. The Bedford Park Mayor was generous in presenting details of what has been accomplished to date. The Wintrust Sports Complex–as we saw first-hand–is an outstanding addition to both Bedford Park and the entire southwest community,” said Anita Cummings afterward. “This exceptional facility will be the catalyst for the continued development of an entire entertainment complex.”

Noting the presence of both Mark Weglarz and Madigan, Cummings said, “Both of these men have never wavered from their support of the United Business Association and the ongoing economic development of the Midway Airport area.”