May 1, 2022/Comments Off on Pro Soccer Report: Red Stars catch lightning in season-opening win over Louisville 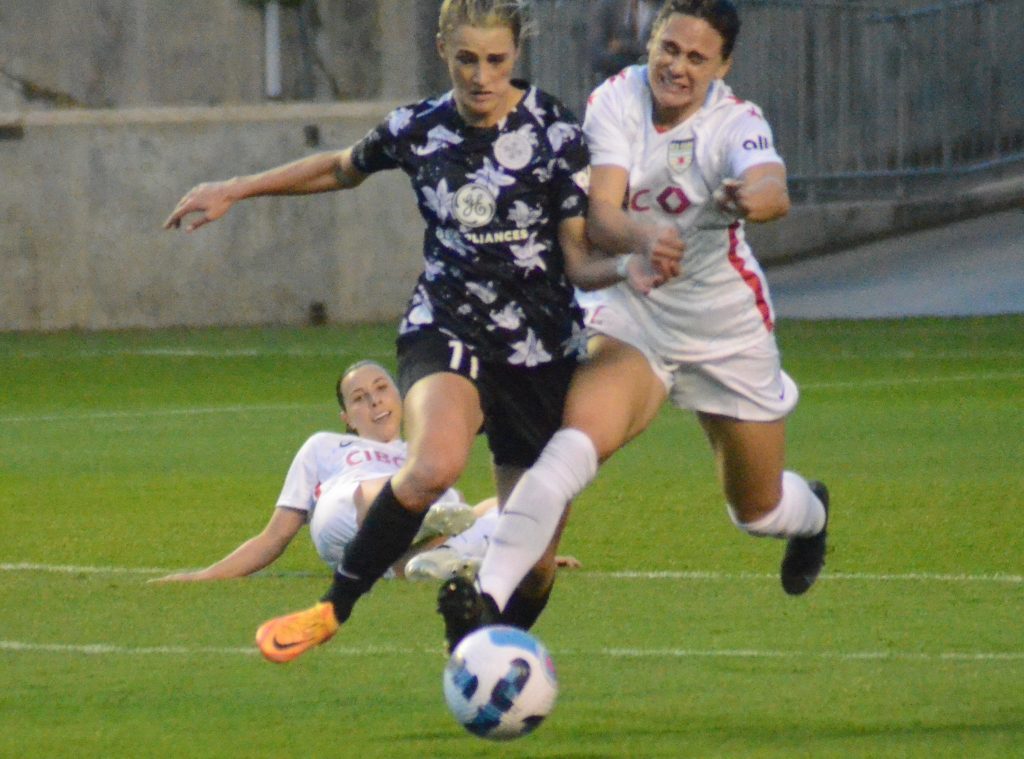 Louisville's Emily Fox (left) and the Red Stars' Bianca St-Georges jostle in the first half of April 30's game. Both scored goals in the Red Stars' 2-1 season-opening victory. (Photo by Jeff Vorva)

The Chicago Red Stars had not won a season-opener since 2015, and the prospects for beginning the 2022 campaign with a ‘W’ were not at their most promising.

The Stars had never beaten their Game 1 opponent, Racing Louisville, a franchise that was an expansion team in 2021.

Tierna Davidson, the team’s top defender, is on the shelf with a season-ending injury.

Goal-scoring wizard Mallory Pugh and Morgan Gautrat were unavailable because of injuries.

Oh, and Yuki Nagasato was not feeling well and was scratched five minutes before kickoff.

Many signs were pointing for a long night for the Red Stars and new coach Chris Petrucelli’s debut on April 30.

That’s why they play the games.

It was a long night — thanks to a lightning delay in the first half — but it was a winning night as the Red Stars (1-0-0) beat Louisville, 2-1, in front of an announced crowd of 3,028 at wet and wild SeatGeek Stadium in Bridgeview.

Speaking of lightning, Ella Stevens caught it early and scored in the second minute. Bianca St-Georges added another goal 23 minutes later, not long after Louisville’s Emily Fox had tied the game.

The Red Stars went 2-2-2 in the Challenge Cup exhibition season, including two draws with Louisville, and playing that team a third time in a month was something that didn’t please Petrucelli. Even with the victory, he was critical of his team’s performance.

“Honestly, it may be the worst game we’ve played up to this point,” Petrucelli said. “But we got the points. The game was very difficult for us. [Louisville] pushed really high. I think they got tired of watching us pass the ball and tried to disrupt us.

“And it worked, honestly.”

Louisville outshot Chicago 14-8 with a 6-3 shot-on-goal advantage and had a 61.1-38.9 percent possession advantage.

But getting the quick lead was a boon for Chicago.

Stevens, who played just 53 minutes for the team in 2021, scored her goal off a corner kick from Danielle Colaprico; but it was not quite how the Red Stars drew it up.

“It was actually funny,” Stevens said. “Sarah [Griffith] was in my spot, or I thought so, and she said, ‘That’s my spot,’ and I said, ‘Where am I supposed to go?’ The ball comes in and I’m, like, standing there and I guess it worked.”

An hour-plus lightning delay after the 31th minute disrupted things, but the Red Stars prevailed.

“We kicked off again at 9 p.m. and I’m usually in bed by 9,” joked goalie Alyssa Naeher, who had five saves. 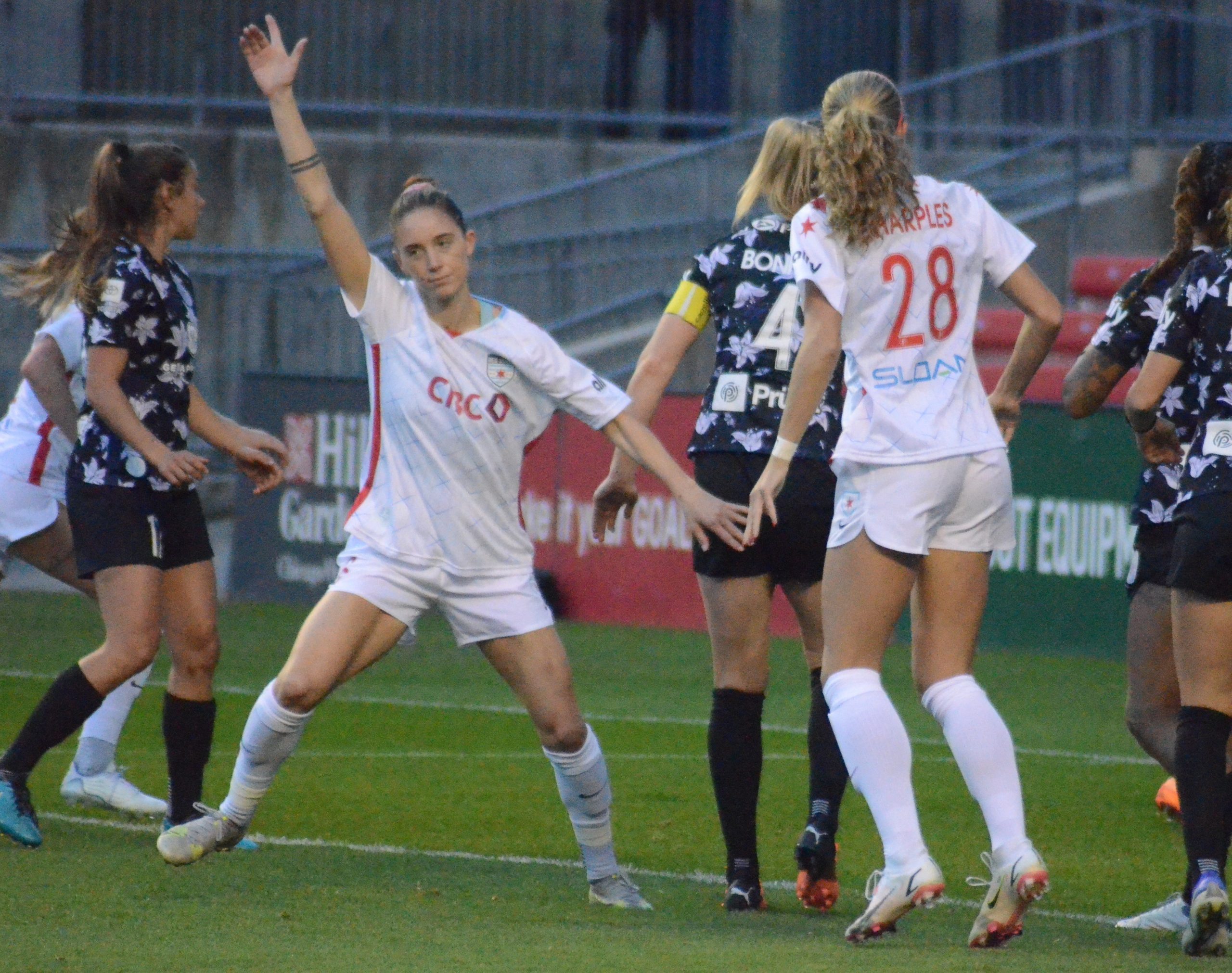 Ella Stevens of the Red Stars reacts after scoring the team’s first goal of the NWSL season April 30 in Bridgeview. Photo by Jeff Vorva

Many teams in the NWSL, including the Red Stars, had problems with allegations of coaches abusing players.

Longtime Red Stars coach Rory Dames resigned a day after the NWSL championship and a day before a Washington Post story ran that he verbally abused players.

Petrucelli knew he could be stepping into a potential hornet’s next and has been stepping lightly.

“We all knew I was walking into an environment where we knew there were some issues in the past,” he said. “I’ve tried to be very respectful of the players as a whole and individually as well.

“The interesting thing for me is that since I’ve gotten here, all I see are happy faces. All I’ve seen is players that are trying hard and players that are doing their best and players who love what they are doing. They love each other and they love their club. That makes it a little bit easier.”

Not that everyone is out of the woods, yet.

“Certainly there were some challenges coming in and we’re still working through some of those challenges in what they expect from the coaching staff and particularly from the head coach,” the coach said. “How I meet their needs is a constant communication to figure that out.”

The Red Stars are scheduled to host Washington in a rematch of the 2021 NWSL championship at 7 p.m. on Saturday at SeatGeek Stadium.

Washington is still alive in the exhibition Challenge Cup and if it wins in the semifinal game on Wednesday, it will play in the championship on Saturday, thus causing the regular season matchup with Red Stars to be rescheduled.