May 3, 2022/Comments Off on Palos Heights delays decision on bushes and fence at Community Park 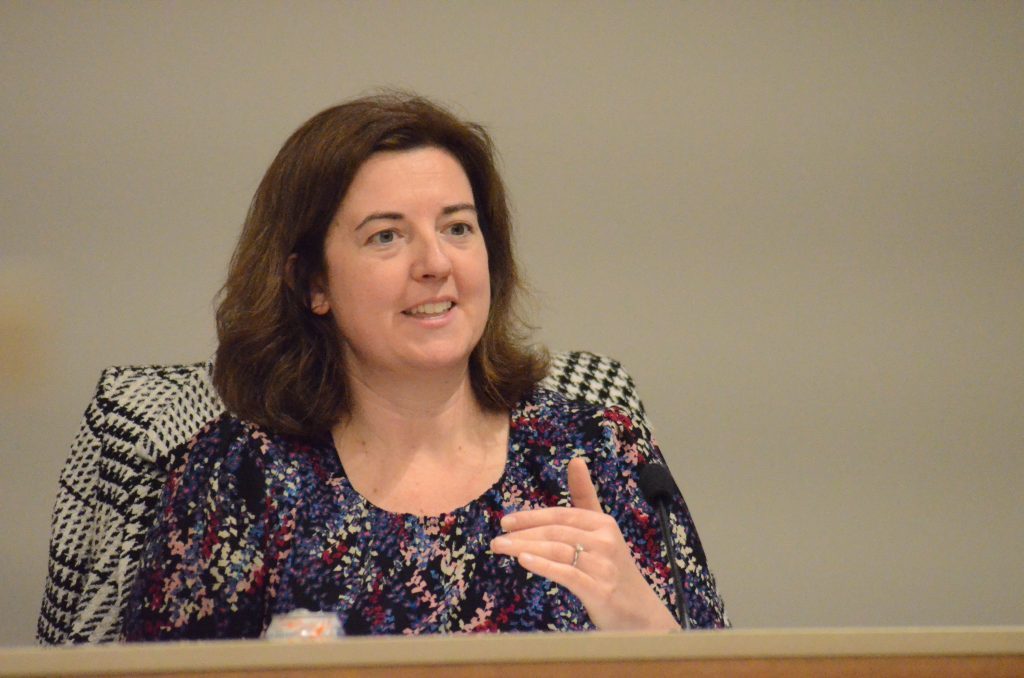 Palos Heights Alderman Heather Begley initiates a discussion about the possible removal of bushes and a fence at Community Park on Tuesday. (Photo by Jeff Vorva)

A longtime issue that has bounced around like a ping pong ball between four committees saw the light of day at the Palos Heights City Council on Tuesday when Alderman Heather Begley (3rd Ward) presented a motion to approve removal of a split-rail fence and 16 bushes on the east end of Community Park between 121st and 120th streets.

The council kicked it around for a half hour before agreeing to table the issue until the May 17 meeting.

According to Alderman Jerry McGovern (4th Ward), the fence and bushes along 76th Avenue were put up for safety reasons and the city was told it would not be insured unless they were there.

“This has developed into an urban myth as to why the bushes are there,” she said. “The source of the urban myth? I don’t know. There is this thought that the state is requiring us to have these bushes here.

She said the issue has had a long history and the council needs to think about how it is affecting Palos Heights residents. Some residents spoke in favor of bringing the bushes and fence down for easier access to the park.

Judging by the comments made by board members Tuesday, it appears that if there was a vote, the bushes and fence would remain standing.

Alderman Jeffrey Key (1st Ward) was passionate about the importance of safety.

“The fact remains that it’s not an entrance to a park – you are walking through a culvert,” he said. “[If the fence and bushes weren’t there] kids will come down the bike path and go right out into the street, so that’s why it’s there.”

He estimated that because of the bushes and fence, people have to walk an extra 50 feet to enter the park.

“I’m not going to vote to have bushes and the fence taken down because someone doesn’t want to go 50 more feet to enter the park,” he said. “It makes no sense, and the city always acts to protect itself. And God forbid someone comes off that path and into 76th Avenue and gets hit.

Alderman Michael McGrogan said he was also in favor of “safety over convenience.”

Other opinions were shared — many to keep the fence and bushes standing — but, in the end, the decision was delayed.

Mayor Bob Straz said he hoped there could be a solution that satisfies all.

“Maybe this whole area can be re-designed to comply with regulations that are out there, yet give people access to the park and make it safe for the residents,” he said. “We need to keep up with the guidelines, but let’s use the guidelines to get the thing done the right way to make everybody happy.”