The new map will shift control of Midway International Airport from the 23rd to the 13th Ward, and push the 14th Ward east, out of Garfield Ridge entirely. --Supplied image

The City Council this week approved a new ward map that, among other things, will see all of Clearing and most of Garfield Ridge shifted to the 13th Ward.

Midway International Airport also would shift from the 23rd Ward to the 13th.

Monday’s 43-7 vote means the issue will not go to a referendum, as some had hoped.

That works for 13th Ward Ald. Marty Quinn, who told the Clear-Ridge Reporter & NewsHound a referendum would have cost taxpayers millions of dollars. He also praised the new map as a fair compromise between various political interests. 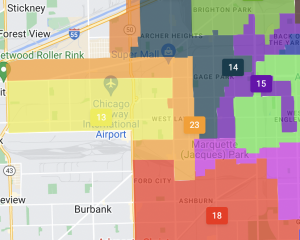 The new map will shift control of Midway International Airport from the 23rd to the 13th Ward, and push the 14th Ward east, out of Garfield Ridge entirely. –Supplied image

The new map is a hard pill to swallow for some aldermen, especially 23rd Ward Ald. Silvana Tabares and other Hispanic members of the Council.

The Council’s Latino Caucus had been holding out for a referendum; but according to published reports, several of its members caved to political pressure—including arm twisting from several large unions–and said they would switch their allegiance to the map favored by the Council’s Black Caucus.

Tabares votes against the map. Also casting a “nay” vote was 14th Ward Ald. Edward M. Burke, who lost all the Garfield Ridge precincts he gained after the remap a decade ago.

In a larger sense, the map wrangling pitted the interests of black ward bosses against Hispanic ward bosses.

The new map includes 16 majority-black wards, 14 majority-Hispanic wards, and one ward where Asians hold the majority.

After Black Caucus leaders announced they have the 41 votes needed to pass their map, Latino Caucus leaders issued a statement that said in part, “The largest minority population in Chicago won’t be fairly and accurately represented as such…we’re disappointed some of our colleagues chose to save themselves over the Latino community. This ‘Welcoming City’s’ elected representatives have proven that they’ll let us in, but our voices do not count.”

The Black Caucus map, also known as the City Council Rules Committee map, appears to be a reflection of the political power of both Mayor Lori Lightfoot and former Illinois House Speaker Michael J. Madigan. According to published reports, some of Madigan’s top lieutenants worked on drawing the map.

More than one political observer has said the expansion of 13th Ward power in Clearing and Garfield Ridge reflects a deal between former 23rd Ward Ald. Michael R. Zalewski and Madigan that dates back to 2015, when Madigan lent his then-massive political muscle to help Zalewski survive a tough re-election battle.

That purported deal, among other things, saw the sudden and surprising resignation of Zalewski in 2018, and Madigan protégé Tabares appointed alderman.

In the years since, Tabares has broken ties with Madigan’s organization over several concerns.

In response to a request for comment, Tabares wrote, “It’s unfortunate that aldermen loyal to Lori Lightfoot are forcing a map on Chicago that was drawn by Mike Madigan’s attorney behind closed doors.

“I think it’s disingenuous for an alderman to claim to prioritize constituent services while working to deny residents the opportunity to have input on our city’s map.

“Many of the new constituents of the 23rd Ward have been represented by politicians who have cozy relations with City Hall and ignore the issues of crime and the mistreatment of our police. That’s about to change.”

Clearing and Garfield Ridge have long been regarded as political plums by some Democratic ward bosses.

Years ago, during the peak of 23rd Ward Democratic Committeeman William O. Lipinski’s political muscle, those plums were closely guarded against infringement by neighboring wards. In fact, there was a time when the 13th Ward did not have even one precinct west of Cicero Avenue.

But as that power started to wane, slowly in Lipinski’s final years and then rapidly under his successor, Zalewski, the 13th Ward gained more ground west of Cicero every 10 years under ward remapping.

After the 2010 Census, the 13th Ward scooped up even more ground in Clearing and Garfield Ridge. Even 14th Ward Democratic Committeeman Edward M. Burke got a bite of the plum, taking precincts away from the 23rd Ward on its north end, in what was then the St. Jane de Chantal area.

The new map, like every map, reflects winners and losers in politics. Burke, under federal indictment on corruption allegations and no longer Democratic committeeman, will see the 14th Ward pushed back east and out of Garfield Ridge.

Tabares will see the 23rd Ward lose all its ground in Clearing and much of Garfield Ridge, keeping only those precincts north of 55th Street.

Chatter on social media showed mixed opinions on the new map, with some 23rd Ward residents glad to be mapped into 13.

“Those guys shovel sidewalks in the winter, and they even have their own graffiti removal team,” said Ed Wisniewicz. “They are focused on service, service, service to their residents. I have no beef with the 23rd Ward. But give me a choice and I’ll take Marty Quinn.”

One woman who asked that her name be withheld said she is pleased her house is being shifted from the 14th Ward to the 23rd.

“I see all these old-time politicians, like Ed Burke and Mike Madigan, getting indicted, and I don’t want either one of them representing me. I mean, they could be going to jail, so they must be focused on their defense and not on serving the people of their wards.

“I like Silvana Tabares,” the woman continued. “She’s young, smart, energetic, highly visible in the community. She’s pro-police and pro-firefighters, and she’s honest and above-board with everything. She’s the type of representative this area needs. And I don’t like the fact that a male-dominated political organization–the 13th Ward, which was such a big part of the Me Too scandal–is trying to take political power away from a woman. As a woman who thinks for herself and who votes, I see what’s being done, and I don’t like it one bit.”

By Jeff Vorva Staff Writer Stagg and St. Laurence’s boys soccer teams advanced to the championship weekend of the Bodyarmor Sports Series showcase by winning games last weekend at Olympic Park in Schaumburg. Stagg opened with a 2-0 victory over Notre Dame in the first round on Sept. 10. Piotr Zawislan and Kamil Bak scored… 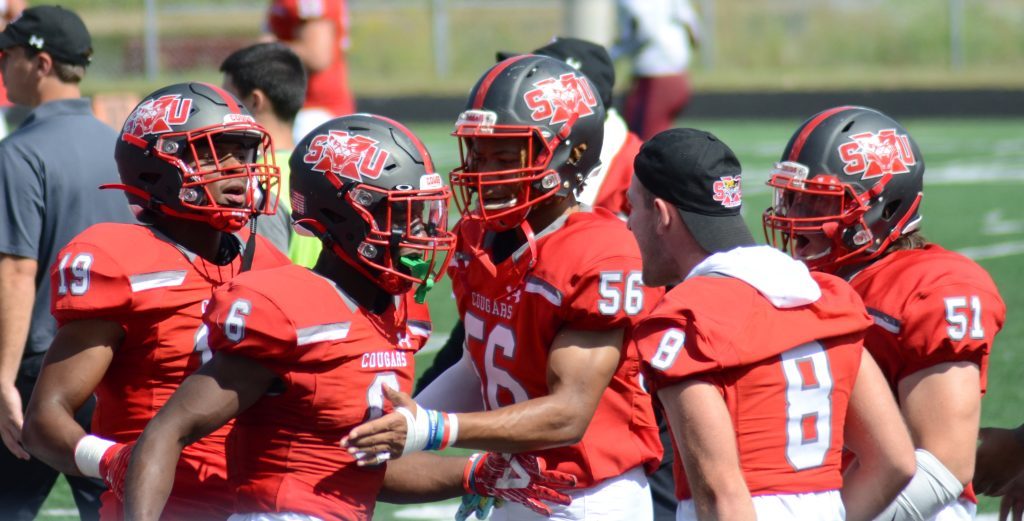 Pigskin Wrap: No panic for SXU after tough start to season

By Jeff Vorva Staff Writer Saint Xavier is off to a not-so-good start, but veteran coach Mike Feminis is not panicking. The Cougars were ranked 11th in the nation in the NAIA coach’s poll and are 0-2 after a 31-10 home-opening loss to St. Thomas (Florida) on Sept. 10. That followed a 57-0 loss to… 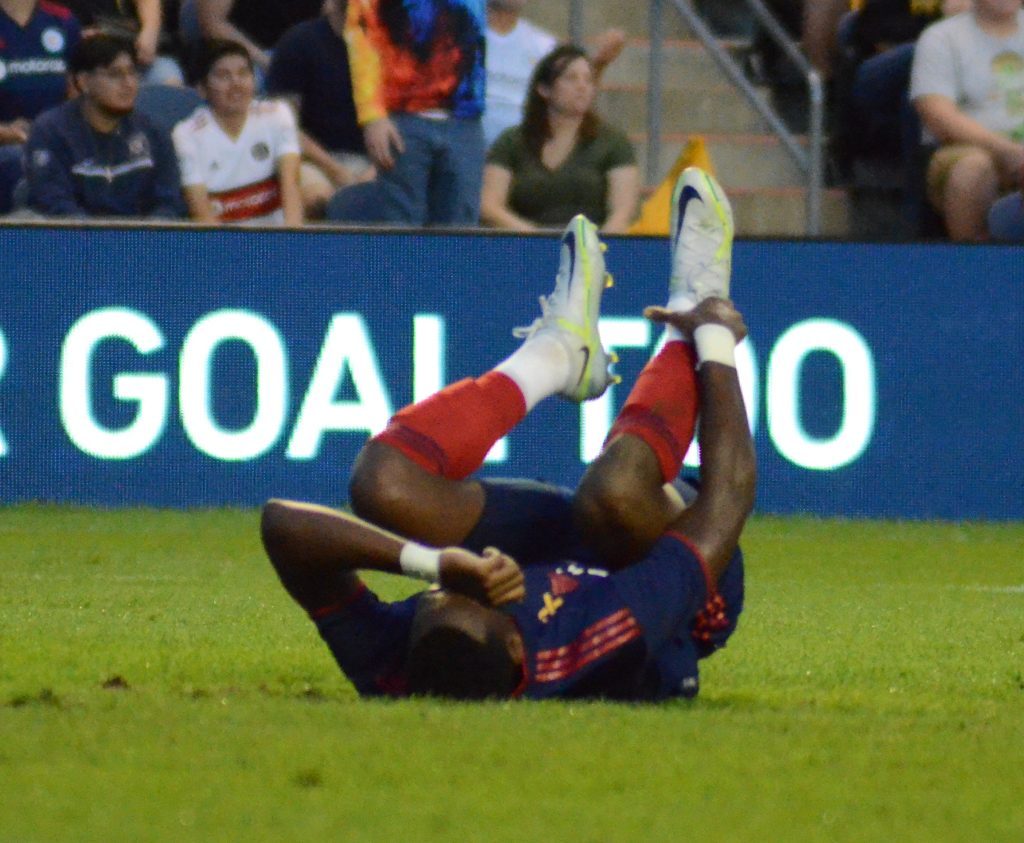 By Jeff Vorva Staff Writer Remember when the Chicago Fire opened the season getting shut out in six of its first eight games? Recently, the Fire started to recreate that skid as they entered their battle with Miami having been blanked in four straight matches and 402 consecutive minutes. Chicago was able to finally break…