Skip to content
May 19, 2022/Comments Off on Midway bouncing back

Elizabeth Granados-Perez, managing deputy commissioner of Midway, and Alex Leon, deputy commissioner in charge of design and construction, made the assertions at the May 11 United Business Association of Midway held at the Airport Maintenance Complex at the south end of the field.

While introducing the officials, UBAM executive director Anita Cummings, a founding member of the business organization, jokingly said, “You wouldn’t be here without us.” She reminded her audience that the business organization was a driving force behind the revival of Midway Airport that began in 1979 when Midway Airlines began operating and she was brought in as a hiring consultant.

UBAM also worked closely with Southwest Airlines founder Herb Kelleher when he brought in his airline when Midway Airlines went out of business a few years later.

“The desire was to reactivate the airport,” Cummings said. “At that time, no one wanted to do it—not the neighborhood or the city. So, it took an organization like ours to see the future of the airport proper and what it could do for the neighborhood.” 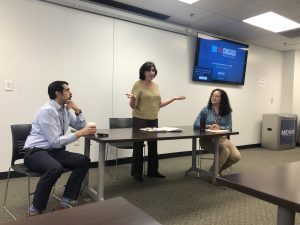 As of March, there are 172 daily flights out of Midway to 73 U.S. cities and eight to international locations.

“That’s why we are sort of arrogant when it comes to Midway,” she said. “We still think of it as a community airport, surrounded by neighborhoods, businesses and schools. And it continues to be a very good neighbor.”

“At the Chicago Department of Aviation , we are focused on growing our airports’ economic impact and connectivity to the world,” said Granado-Perez, referring to O’Hare as well.

Granado-Perez said that with the growth in concessions as part of the Midway Modernization capital improvement program, there are now 29 restaurants and pubs in the airport—including more than 22 new brands. There are also 18 retail shops and eight vending machines offering fresh food options (and a Build-A-Bear one). She said some moving sidewalks were removed to make room for the new eateries.

Cummings contrasted that to 1979 when there was only one—Shipwreck Kelly’s—and the airport was so empty that airline employees could shout food orders across the terminal to the restaurant, and they would be delivered.

Granado-Perez said Midway’s rebound from the pandemic was quicker than O’Hare’s, due to its focus on domestic, leisure travel. Passenger numbers at Midway are up 15 percent for March and 18 percent for April over the same period last year.

“Domestic leisure traffic has returned to pre-pandemic levels, and we are close to gaining most of our destinations back,” she said. “But customer safety remains our top priority.”

Leon, in response to a question from the audience, stressed that the no city taxes pay the $333 million price tag on the Midway Modernization program that began in 2017. All airport improvements are funded by passenger facility charges on airline tickets, as well as rental payments from airlines.

“We do apply for federal grants, but that is mainly for improvements to the airfield,” he said.

He said the pandemic did not stop one of the major improvements, the expansion of the security checkout bridge, which has been completed.

“With the lower passenger volume, we were able to complete some things quicker,” he said. “It’s now a modern, efficient layout that allows us to process passengers in a faster fashion. This project has won three or four awards, lighting, configuration awards.”

Leon noted that the number of lanes in the security area was not increased from 17, but there is room to expand to 23 if needed in future.

“At one point, we considered expanding the parking garage but we decided against that because it wasn’t needed,” he said, adding that some improvements to lighting and elevators will still be done.

“The concessions redevelopment is ongoing. We put a pause to it because we didn’t see the passengers there,” he said.

Upcoming improvements planned for the airport include renovating restrooms, expanding a section of the AMC building to house a growing fleet of airport maintenance vehicles, and improving taxiways on the adjoining airfield.

“The development program has had local impact,” said Granado-Perez, explaining that the agreement calls for 56% participation of businesses classified as Airport Concessions Disadvantaged Business Enterprises. ACDBE is a federal program aimed at helping small businesses get contracting opportunities at airports.

She said ACDBE participation is now at 55%, the highest in the country, and 80% of the 1,000 people hired are Chicago residents.

Responding to questions from audience members, the CDA officials acknowledged that the state law allowing gambling in Chicago also permits video gaming at both city airports. But it won’t be coming very soon.

“I would say that is still on the drawing board. We are not having those conversations right now,” said Granado-Perez.

She also said airport officials were unaware of a proposal that developers of the former LeClaire Courts site brought to community groups about having a Metra stop on the east side of Cicero Avenue at 43rd Street.