The squeal of tires and roar of engines continue to be a nighttime nuisance for thousands of neighbors living along the Pulaski corridor, from Archer Heights on the north to Scottsdale on the south. --Images captured from cellphone videos

Neighbors angry, but not surprised by shooting

What a number of Southwest Siders living along the Pulaski corridor have been warning about appears to have occurred.

The victim was taken to Advocate Christ Medical Center, where he was listed in critical condition. Police would only say said the shooter was a man who drove his vehicle into the parking lot at a high rate of speed and crashed into the victim’s vehicle. During an argument, there was an exchange of gunfire between the victim and the driver of the speeding vehicle. No one is in custody. 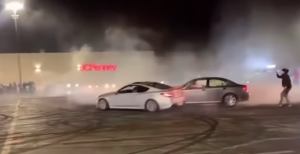 The squeal of tires and roar of engines continue to be a nighttime nuisance for thousands of neighbors living along the Pulaski corridor, from Archer Heights on the north to Scottsdale on the south. –Images captured from cellphone videos

The parking lot in question (built more than 40 years ago as a Kmart/Dominick’s/Walgreeens lot), is a popular gathering place for young men who enjoy racing and performing stunts (like donuts, drifts, burnouts and powerslides).

It is especially popular on Friday and Saturday nights; but weeknights see the drivers and their fans as well, if the weather cooperates.

The noise from the roaring engines and squealing tires is a nuisance to many—heard blocks and sometimes miles away. People have complained of disrupted sleep of everyone from newborns to the elderly. Others, including people with Post-Traumatic Stress Disorder, have said the noise triggers anxiety attacks.

Still others have warned that the drivers will one day harm someone or even get someone killed—either through reckless driving or through fights between groups of young people.

“You knew this would happen,” said West Elsdon resident Angie Morales. “Week after week after week, this goes on and nothing is done.”

Police were initially unclear on whether the shooting was in any way connected with the late-night antics of young drivers; but nonetheless, the crime triggered a wave of anger.

“It sounded like a war zone,” said one woman who asked that her name not be disclosed. “It was crazy. God help us all. You can’t even drive to the grocery store because [the reckless drivers] feel they’re above the law… they drive crazy, cut you off, take red light and tail your ass until you move. It’s crazy. Please be careful out there.”

For the most part, the drivers in question use the Pulaski corridor, roughly from the Stevenson Expressway south to 76th Street. Their favorite gathering spot appears to be the huge parking lots at Ford City, but other hangouts are lots at 71st Street and around 43rd Street.

Officially, police have made “drag racing/reckless driving” the top priority in their 2022 Strategic Plan—a move driven by citizens who participated in a two-part “community conversation” with CPD last fall.

But individual police officers—mostly in private but sometimes publicly at CAPS meetings—say there’s not much they can do about the problem for several reasons: police staffing levels are far too low, they are currently prohibited from chasing reckless drivers, and there is not much they can do to force owners of large parking lots to block drivers from entering late at night.

Several people on different social media platforms this week suggested that police impound the cars of reckless drivers, with one person even suggesting that local towing companies be used remove impounded cars. 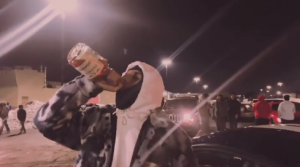 “This is an ongoing problem that should have been dealt with from the start, but was allowed to continue to go on, even after many complaints,” said one man who asked that only his first name, Greg, be used. “Now these kids think they are entitled to continue this behavior and cause many problems for the community, so this doesn’t surprise me at all that these problems are accelerating out of control.”

Cecy Jaimes agreed that private towing companies should be part of the solution.

“It’s a simple solution,” she said. “Tow truck companies will bank City will bank Impound lots will bank. Insurance for those individuals will skyrocket and their licenses will be suspended…a percent of that money should go to the local community where this crap is happening to install more speed cameras to keep collecting money from these racers or anyone who thinks going 15 mph over the speed limit is OK. At this point, laws already on the books need to be enforced.”

“If these cars were disrupting the sleep of Mayor Lightfoot—or Amy Eshleman or their daughter–how long do you think it would take the mayor to solve the problem?” he asked. “A month? A week? A day? I think we know the answer. What does she care about this part of the city?”

By PETER HANCOCK Capitol News Illinois ph[email protected] SPRINGFIELD – State Sen. Emil Jones III pleaded not guilty in federal court Friday to three felony counts stemming from an alleged bribery scheme involving a red light camera company. Jones, 44, is a Chicago Democrat who has served in the Senate since 2009. He is also the…