May 22, 2022/Comments Off on Area Sports Roundup: Sandburg takes 2nd at Bajenski tourney

Sandburg's Jeremy Johnson, the hero of a semifinal win over Homewood-Flossmoor, legs out a hit in a 6-3 loss to Lockport on Saturday at Ozinga Field. Photo by Jeff Vorva

The Sandburg baseball team has had more downs than ups this season.

But the Eagles finished the regular season on a strong note with a run to second place at the Steven M. Bajenski Memorial Tournament, which wrapped up May 21 at Ozinga Field in Crestwood.

To get to the title game, the Eagles won a wild 9-8 decision over Homewood-Flossmoor via a walkoff hit by Jeremy Johnson, causing a huge celebration.

Sandburg dropped a 6-3 decision in the title game to Lockport and headed into regionals with a 14-15 mark.

Outfielder Jake Liskiewick was given an award after the game for “playing the game the right way.” Liskiewck, a senior, said he will cherish the plaque.

“This is more than a tournament,” he said. “It’s all about Stevie’s way. I’ve played with the Orland Park Sparks and I’ve heard stories about his life. This means a lot to me.”

Bajenski, who played at Mount Carmel, died in 2009 after complications from heart surgery. This is the 10th running of the tournament named in his honor, and the Do It Stevie’s Way Foundation is a scholarship fund for senior students who best exhibit “Stevie’s way,” according to the foundation.

Several sectionals were postponed because of rain throughout the area on May 21.

Some were played, however, and Stagg won the Oak Lawn Sectional by three points over Sandburg. It is the fifth sectional title in the Chergers’ history.

Lyons took second place at its own regional. Sophomore Jack McLane finished fourth and qualified for state. The Lions’ doubles teams of Tiernan Kelly-Patrick Adams and Will Carroll-Mason Mazzone finished second and third, respectively, to punch their tckets to state. 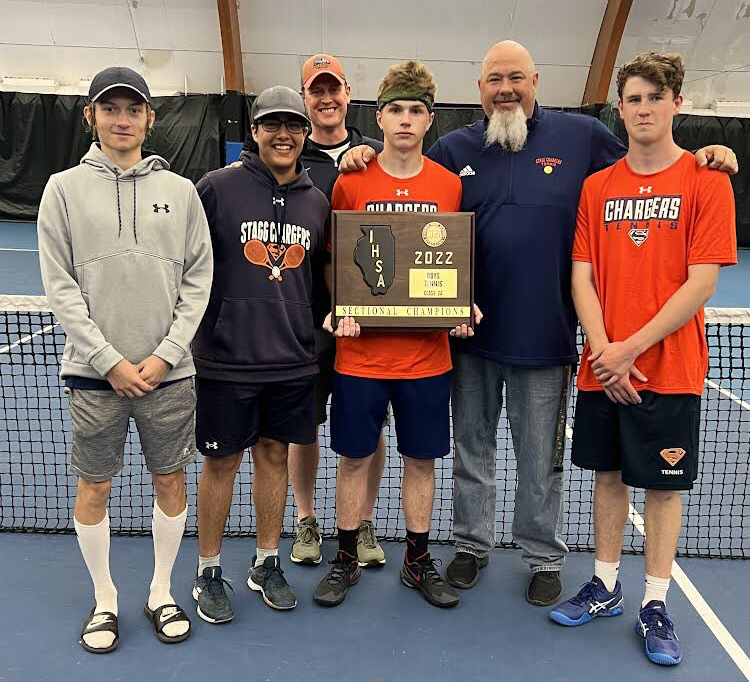 The Saint Xavier softball team’s season came to an end May 16 with a 3-2 loss to SouthEastern University of Florida in the NAIA Opening Round Tournament in Lawrenceville, Georgia.

The Cougars (39-8) needed to win both games against the Fire in the double-elimination tournament, and won the first one, 12-6. But they were eliminated in the second game on a walkoff hit.

Senior outfielder Lyda Robinson of Seneca went 4-for-5 in game one and set the SXU single-season record for runs scored with 61.