The City Council this week approved a new ward map that, among other things, will see all of Clearing and most of Garfield Ridge shifted to the 13th Ward.

Midway International Airport also would shift from the 23rd Ward to the 13th.

Monday’s 43-7 vote means the issue will not go to a referendum, as some had hoped.

That works for 13th Ward Ald. Marty Quinn, who told the Greater Southwest News-Herald a referendum would have cost taxpayers millions of dollars. He also praised the new map as a fair compromise between various political interests. 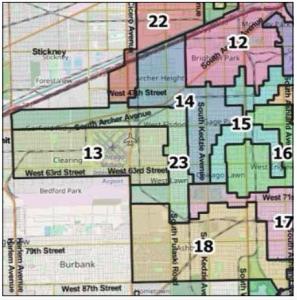 The new map is a hard pill to swallow for some aldermen, especially 23rd Ward Ald. Silvana Tabares and other Hispanic members of the Council.

The Council’s Latino Caucus had been holding out for a referendum; but according to published reports, several of its members caved to political pressure—including arm twisting from several large unions–and said they would switch their allegiance to the map favored by the Council’s Black Caucus.

Three Southwest Side aldermen: Tabares, along with Edward M. Burke (14th) and Raymond A. Lopez (15th), voted against the new map. Burke lost all the Garfield Ridge precincts he gained after the remap a decade ago, and Lopez (who can’t run for re-election since he is running for mayor) saw his ward contorted beyond its already curious boundaries.

In a larger sense, the map wrangling pitted the interests of black ward bosses against Hispanic ward bosses.

The new map includes 16 majority-black wards, 14 majority-Hispanic wards, and one ward where Asians hold the majority.

After Black Caucus leaders announced they have the 41 votes needed to pass their map, Latino Caucus leaders issued a statement that said in part, “The largest minority population in Chicago won’t be fairly and accurately represented as such…we’re disappointed some of our colleagues chose to save themselves over the Latino community. This ‘Welcoming City’s’ elected representatives have proven that they’ll let us in, but our voices do not count.”

The Black Caucus map, also known as the City Council Rules Committee map, appears to be a reflection of the political power of both Mayor Lori Lightfoot and former Illinois House Speaker Michael J. Madigan. According to published reports, some of Madigan’s top lieutenants worked on drawing the map.

More than one political observer has said the expansion of 13th Ward power in Clearing and Garfield Ridge reflects a deal between former 23rd Ward Ald. Michael R. Zalewski and Madigan that dates back to 2015, when Madigan lent his then-massive political muscle to help Zalewski survive a tough re-election battle.

That purported deal, among other things, saw the sudden and surprising resignation of Zalewski in 2018, and Madigan protégé Tabares appointed alderman.

In the years since, Tabares has broken ties with Madigan’s organization over several concerns.

In response to a request for comment, Tabares wrote, “It’s unfortunate that aldermen loyal to Lori Lightfoot are forcing a map on Chicago that was drawn by Mike Madigan’s attorney behind closed doors.

“I think it’s disingenuous for an alderman to claim to prioritize constituent services while working to deny residents the opportunity to have input on our city’s map.

“Many of the new constituents of the 23rd Ward have been represented by politicians who have cozy relations with City Hall and ignore the issues of crime and the mistreatment of our police. That’s about to change.”

During City Council debate Monday, many of the 43 praised the process as fair. One Southwest Side alderman, David Moore of the 17th Ward, went so far as to say, “As far as [an allegation of] gerrymandering goes, there was none of that in [the City Council map room]…we worked hard to get every ward as square as possible”—a comment that drew snickers from some who perhaps were thinking of the shape of the new 23rd Ward, or perhaps the shape of the new 36th Ward, described by Lopez as “two Campbell’s Soup cans connected by a string.”

By Kathy Headley Your correspondent in Chicago Lawn and Marquette Manor 6610 S. Francisco • (773) 776-7778 A building starts out as a collection of wood or bricks. As time goes on, some might be cherished for their aesthetic value, some for their historic value, some for the memories held inside. We have great vintage…