“Quite frankly, I think she’s the best player in the league,” the first-year coach said. “There’s nobody I would rather have, honestly. I’m lucky I get a chance to work with her and I’m really enjoying it.”

In her second game back from an injury, Pugh scored in the fourth minute in a 2-2 draw with Portland in an NWSL battle at SeatGeek Stadium in Bridgeview on May 28.

In 112 minutes of NWSL play, Pugh has three goals and an assist. In six Challenge Cup exhibition games, she notched four goals.

“It’s been fantastic,” Petrucelli said. “She is ultra-talented and extremely competitive. Mal plays with a joy that is just fun to watch. When she is playing her best, she is enjoying herself and she’s happy. She’s making other people happy. She’s very easy to work with.

Her speed and deft ball-handling skills had many in the announced crowd of 3,268 yelling as she scored on a breakaway to give the Stars (2-1-1) a 1-0 advantage early against the Thorns (1-1-3)

This is the 24-year-old player’s second season in Chicago after playing for Washington in 2017-2019 and Sky Blue FC in 2020. She had scored three goals in 18 regular-season games for the Stars before this season’s outburst.

“Last year I felt welcomed by all of the players and it was an easier transition for me,” she said. “Just being able to find my game gave me confidence in myself and confidence in who I am as a person. It’s all come full circle.

“It’s a mixture of things that has helped play well.”

She gets knocked down…

In the old Chumbawamba hit “Tubthumping,” there is a line “I get knocked down, but I get up again.”

That could describe Rachel Hill’s goal against Portland in the 20th minute. She was knocked down on a left-footed attempt and was flat on the ground when the ball went through the net.

She allowed herself a fist pump for the score. Ava Cook was credited with the assist.

Rachel Hill pumps her fist after being knocked to the ground scoring the Red Stars’ second goal in a 2-2 tie with Portland. Photo by Jeff Vorva

Thanks in part to the Challenge Cup spilling over into the regular season and causing a May 7 game with Washington being moved to June 8, Saturday’s game with the Thorns opened a stretch in which the Red Stars play five games in 16 days.

“And they are not against easy teams,” Petrucelli said.

The Red Stars were scheduled to visit Washington Wednesday, host the OL Reign at 2 p.m. Saturday, host Washington at 7 p.m. June 8 and host Orlando at 5 p.m. on June 12.

The Red Stars and Washington played in the NSWL Tournament championship last year, with Washington winning in overtime. These two meetings will be the first time the two teams mett since that tangle.

The Chicago Fire II scored eight goals in its first eight games, so offense was not a strong suit.

But on May 27, the Fire left the country and went on a scoring spree in a 6-2 victory over Toronto II in an MLS NEXT Pro matchup.

Josh Penn scored three goals in the first 34 minutes for the Fire (2-4-3, 10 points) while Omari Glasgow, Erik Kocs-Washburn and Missael Rodriguez scored in the second half. Toronto (3-6, 9 points) mustered up a pair of goals in the closing minutes.

“We played a very aggressive style, and when it works we can score a lot of goals,” Penn said. “Luckily, everyone was in tune. They were able to find me a couple of times and I was able to finish it. So, it was a really great feeling.”

The Fire II returns to SeatGeek Stadium at 7 p.m. on Saturday for a tangle with the Columbus Crew II. 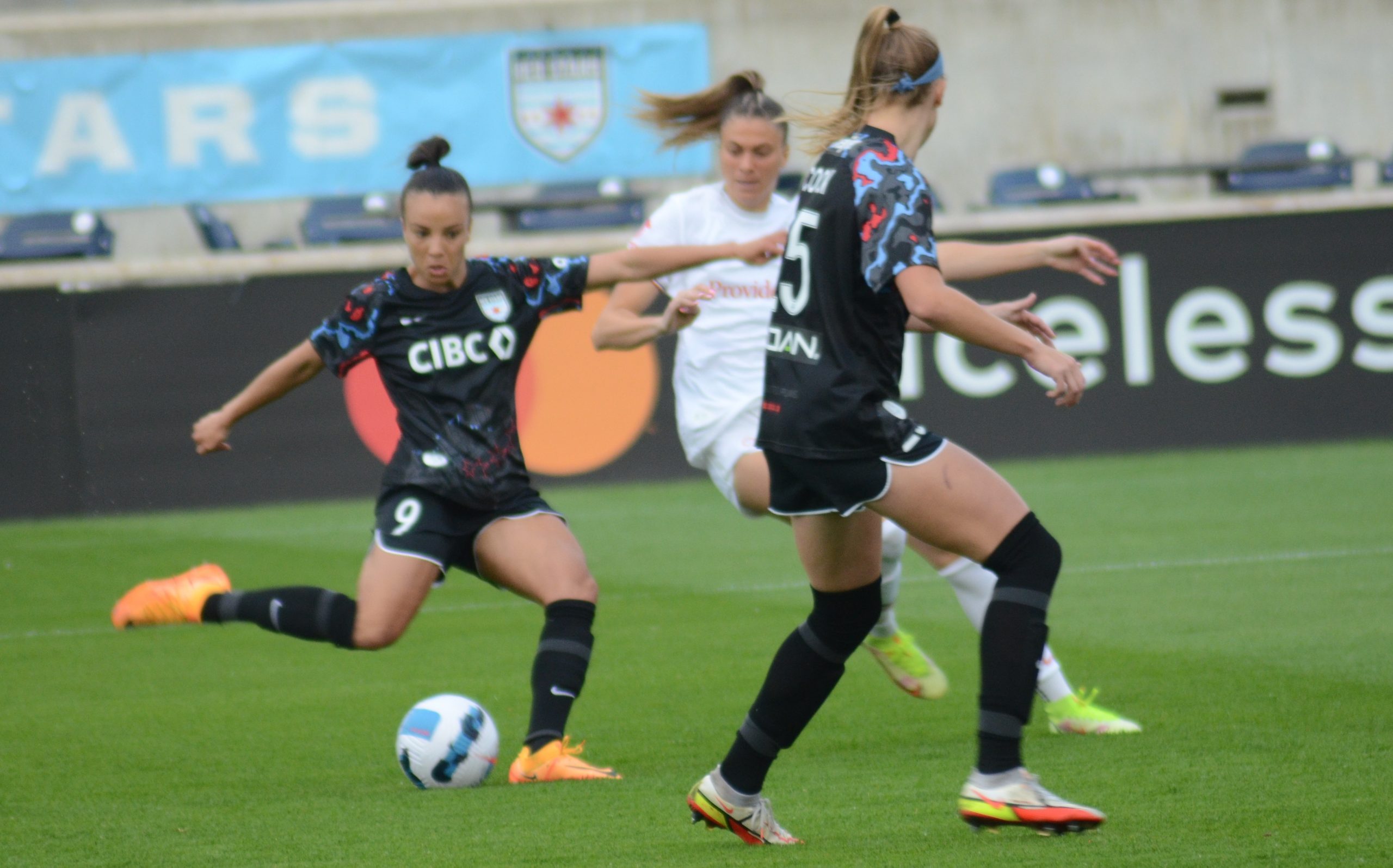 Red Star Mallory Pugh gets ready to deliver the shot in the fourth minute that went in for a goal Saturday night in a 2-2 tie with Portland. Photo by Jeff Vorva