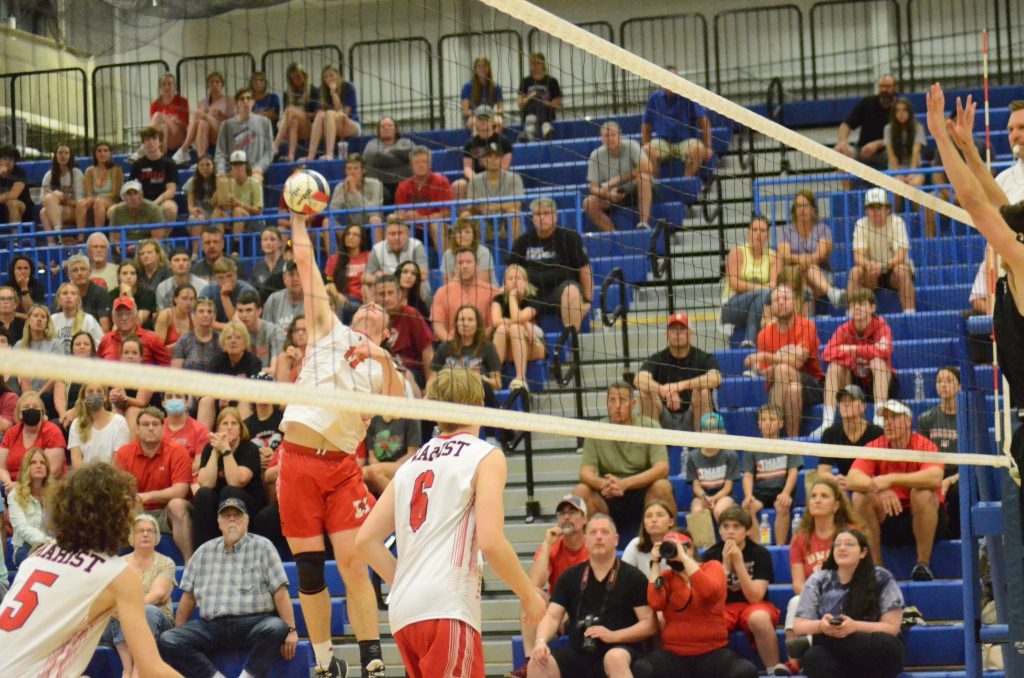 Marist's Kellen O'Keefe gets ready to pound a shot against Lincoln-Way East in a three-set sectional title loss in Orland Park. Photo by Jeff Vorva

For the first time since 2014, no area boys volleyball advanced to the Elite Eight.

In the past seven postseasons, either Marist, Sandburg, Brother Rice or St. Rita made it to the quarterfinals. This year, Marist was the last team standing, but dropped a wild 23-25, 25-22, 25-21 decision to Lincoln-Way East on May 31 in the Sandburg Sectional championship match in Orland Park.

The Griffins went on to finish second to Glenbard West for the state title on June 4. Marist had split with both East and Glenbard West this season.

Marty Canavan had 13 kills for Marist (35-3-1) in the season finale against the Griffins, while middle hitters Mike Uldrych (nine kills) and Alex Smith (eight) had big nights. But the RedHawks didn’t have any answers for East senior Jared Byas, who had 18 kills and eight digs.

All three of Marist’s hitting stars from the match are scheduled to return next season. This summer could be a key to what is expecting to be a huge season in 2023.

“We’re still going to keep on with the Marist program. We have a couple of sand tournaments and camps,” Canavan said. “It’s really just trying to stay with it.”

For the second year in a row, the RedHawks were a game away from making it to the quarterfinals. Coach Jordan Vidovic was proud of his team’s overall effort this season.

“It’s everything you expect,” he said. “You want to play in these kinds of matches and that’s what makes the season so special. Every fall [with the girls program] and every spring, we’ve given ourselves a chance.”

All-state nods
Seven players from the area were recognized as all-state performers by the Illinois Volleyball Coaches Association.

RedHawks Lacrosse
Despite having important supersectional games moved from downstate Washington to Marist, the RedHawks boys and girls lacrosse teams fell in the Elite Eight.

Marist’s girls lost a tough 18-16 battle on May 31 to Lincoln-Way Central, which went on to finish fourth in the state. New Trier won the state title.

The boys lost to Neuqua Valley, 12-11, in May 31. Neuqua went on to finish fourth in the state. Loyola Academy won the state title.