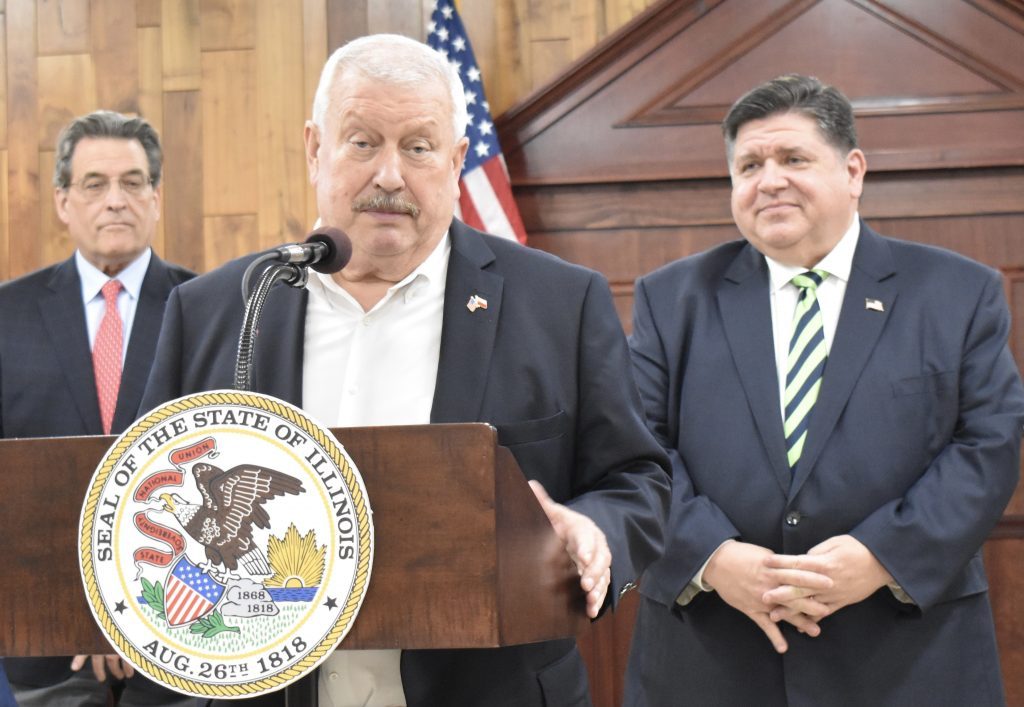 Justice Mayor Kris Wasowicz is pleased to get a state grant to stop flooding on Marion Drive. State Senator Steve Landek is to his left, Governor JB Pritzker to his right. (Photos by Steve Metsch)

On a warm sunny spring day, Adam Nassar of Justice was outside in his building’s driveway, helping two friends detail a car.

Nassar, 32, had no worries about flooding that day in the 8000 block of Marion Drive. Then again, it wasn’t raining. 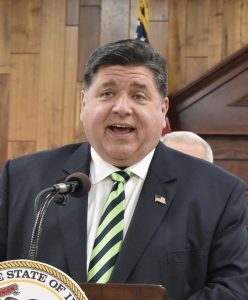 “It’s (messed) up,” he said when asked what happens during a downpour.

“The water? It’s almost to here,” Nassar said as he stood about 50 feet from the roadway.

Nassar is not alone in his frustration, Justice Mayor Kris Wasowicz said.

“About 40 years ago, when this subdivision was built, some genius designed the street as a retention pond,” Wasowicz said, shaking his head.

But help is on the way from Springfield.

On May 31, at the Justice Village Hall, Governor J.B. Pritzker announced a $1.4 million grant from the state to alleviate flooding on a two-block stretch of Marion Drive between Roberts Road and 82nd Avenue. It’s part of the sweeping Rebuild Illinois program.

The plan calls for raising the roadway, installing new curbs and gutters and installing detention areas beneath to contain rainwater. Work is expected to begin next spring, Wasowicz said.

It is one of 34 infrastructure projects unveiled May 31 that will cost the state $50.7 million. 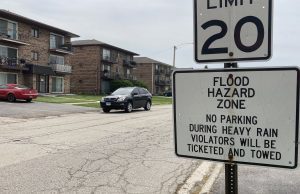 This sign in the 8000 block of Marion Drive says it all.

In the Chicago area, Manhattan is getting $725,000 for drainage improvements, Broadview is receiving $574,000 for street roadway reconstruction, utility improvements and an ADA crossing: and Hillside gets $2 million for sewer improvements.

Justice officials are elated to finally be getting help after seeing the roadway flood with heavy rains. All that water makes driving difficult and walking practically impossible for residents who live in the 28 six-flats that line Marion Drive.

“You can’t access those buildings (when it rains hard). That’s why I’m very grateful to the governor and the DCEO (Department of Commerce and Economic Opportunity) for this project,” the mayor said.

The project “has been in the works for a while,” said Wasowicz, who expects the MWRD to approve the plan later this year.

Rebuild Illinois, the largest infrastructure program in state history, with least $3.3 billion in grant and programs, “has repaired or replaced over 3,700 miles of roads and more than 370 bridges,” Pritzker said.

“Every corner of Illinois deserves 21st century infrastructure and Rebuild Illinois is the largest effort to get us there,” Pritzker said.

While the Justice project may not sound exciting, Pritzker said, “when it’s complete it will help alleviate street flooding on Marion Drive and make 140 families’ homes safely accessible during rainstorms. That’s a whole lot of worry off those parents’ backs, and a safer community for everyone.”

Yes, the state has the money needed for the work, Pritzker said.

“We’ve balanced the budget for four years in a row. We’ve paid down our backlog of bills. We’ve reduced our pension liability. And, very importantly, when we passed Rebuild Illinois, we made sure we had funding sources so that we’re able to do all of the projects,” Pritzker said.