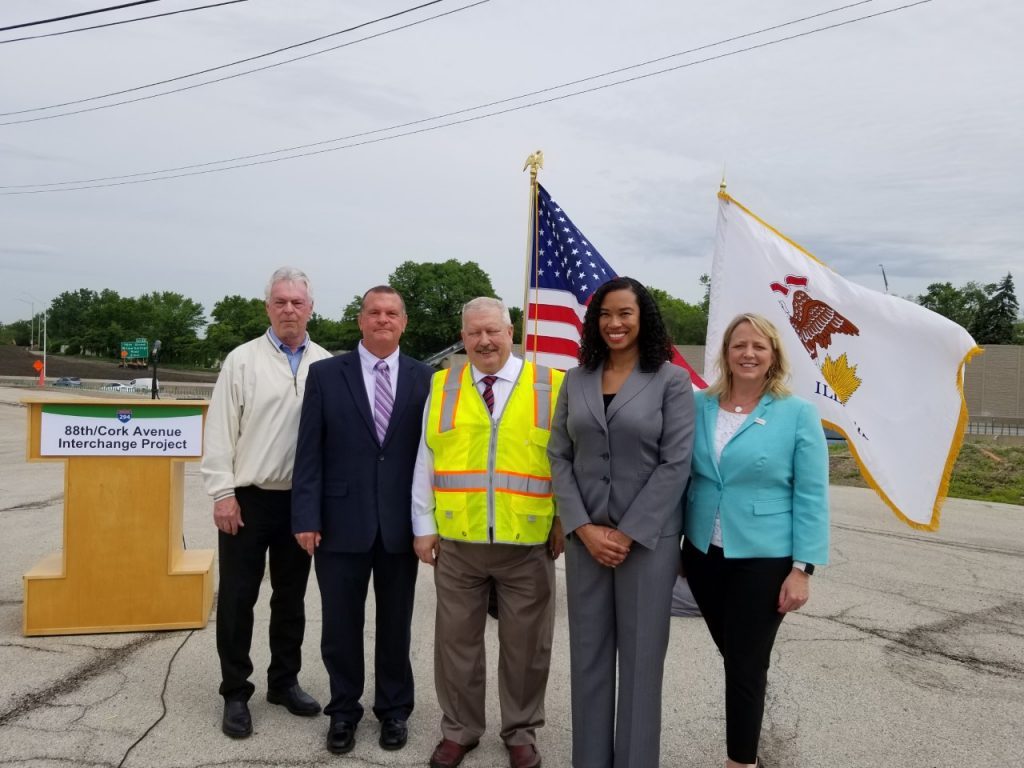 After years of wishing and planning, construction of the Tri-State Tollway interchange at 88th and Cork Avenue in Justice is about to begin.

The June 1 event was held on Frontage Road, between Cork Avenue and Industrial Drive in Justice.

The new interchange will be built as part of the Tollway’s $4 billion Central Tri-State Tollway Project, with the cost of new ramps being shared by the Tollway and its local partners.

The interchange is one of the top projects in the state’s Competitive Freight Program aimed at improving the movement of freight and delivering congestion relief and economic benefits across the state.

Local residents may remember when there was an exit ramp from northbound Interstate 294 to 88th/Cork Avenue. It was removed in 1992 as a perceived safety threat to a nearby school, which itself was closed a few years later. That ramp was part of the discussion at last week’s event.

The current project has been a dream of Justice Mayor Kris Wasowicz for years and has been in the planning stages for years involving the tollway, state, county, the Village of Justice, and the Southwest Conference of Mayors.

The $39 million infrastructure investment includes construction of new ramps connecting 88th/Cork Avenue to the Tri-State Tollway, along with other local roadway improvements to both accommodate the larger Central Tri-State construction project as well as to improve local traffic circulation and provide congestion relief.

The interchange project is scheduled to be complete by the end of 2024.

Executive Director for the Illinois Tollway Lanyea Griffin said, “This new interchange is going to be more than access improvements – it’s going to be a game changer for the Chicago Southland in terms of providing congestion relief and economic opportunities. Our agency’s innovative Interchange and Roadway Cost Sharing Policy is providing communities like Justice new opportunities and is opening doors for economic success, and as you will hear those doors are wide open.”

The new interchange is designed to be compatible with a new ramp connecting southbound Archer Avenue to northbound I-294, which is being constructed by the Illinois Tollway as part of the Central Tri-State Tollway Project.

“This project aligns with Cook County Board President Toni Preckwinkle’s goal that all communities throughout the county are ensured equitable access to safe, modern and efficient roadways,” said Cook County Department of Transportation and Highways Supt. Jennifer “Sis” Killen. “Transportation investment is the backbone to supporting economic potential in our region. We are proud to partner with the Tollway and the Village of Justice on this critical freight project to provide improved mobility and reduced congestion for those traveling within the Village and surrounding Southland communities.”

The new interchange is located within an enterprise zone created by the Village of Justice and will encourage new construction and support job creation in the village, as well as opening up an entryway to Justice and other surrounding communities to relieve traffic congestion and provide easier access to destinations including freight related businesses and SeatGeek Stadium.

Wasowicz was excited to see the project get underway. ““The project will facilitate investment in and redevelopment of the Village of Justice and several surrounding communities while improving efficiencies for freight related companies for more cost-effective shipping and logistics and will create employment opportunities and mobility for the region.”

Benefits of the ramp work mentioned include creating improved truck access to the CSX Railroad intermodal yard in Bedford Park, reducing congestion, and promoting economic development and job creation in the region.

Mayor Jerry Bennett of the City of Palos Hills was on hand to congratulate Justice and Wasowicz.

“Mayor Wasowicz approached the Southwest Conference of Mayors 15 years ago to look into funding to get the ramp project moving. That’s a lot of dedication,” Bennett said.

Bennett, who’s in his 41st year as mayor, said, “What’s good for one town is good for everyone else. It brings development for all of us, so I’m happy for them.

“Cooperation is how things get done. There were multi agencies who bought this to fruition and working together is what it’s all about. There may be more projects in the works down the road. We will be looking for a few ramp projects on south end of 294 around 103rd near Harlem. Will work with Chicago Ridge to try and ease up 95th street ramp congestion.”

Information on the 88th/Cork Avenue Interchange Project, including comprehensive information and map overviews can be found in the Projects section on the Tollway’s website.