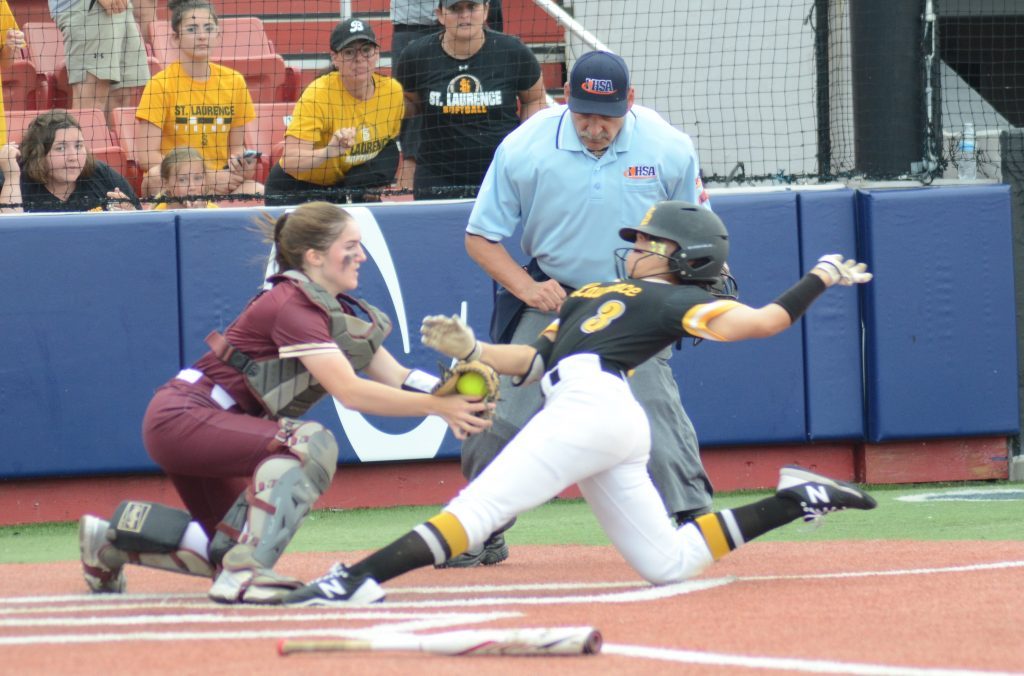 St. Laurence’s Sophia Sanchez slides on a seventh-inning play at the plate and St. Ignatius catcher Elise Wolf applies the tag. Sanchez was called out on the close play and the Vikings went on to lose, 1-0 at the Rosemont Supersectional on Monday. Photo by Jeff Vorva

It took a near perfect game — and a close play at the plate — to eliminate St. Laurence from its historic season.

The Wolfpack managed to scrape across a run in the bottom of the sixth. The Vikings, none of whom had reached base off of Giles, were down to their last two outs when Sophia Sanchez livened things up with a double to left. After the left fielder bobbled the ball, Sanchez was sent home and was called out on a close play at the plate.

St. Ignatius held on for the 1-0 victory and St. Laurence (22-11) just missed making the state tournament. The Vikings had on Friday won the first sectional championship in the program’s brief history.

The game was played in around 90 minutes in a window that didn’t feature any rain, on what turned out to be a rainy and stormy Monday.

There was, however, still some moisture to contend with.

“My hand was sweaty out there and I’m sure Ellie’s hand was sweaty, too. It was just try to work through it to the best of your ability,” Klonowski said. “Make sure you’re spinning the ball.”

The Wolfpack (28-8-1) scored 12 runs against Benet on Friday to win the Glenbard South Sectional. Klonowski shut offense down on two hits.

But the Vikings were having a tough time catching up with Giles, who had 11 strikeouts.

Sanchez nearly knotted things up with her ringing double.

“I was loose out there, and I felt like I owed it to Ellie because she’s a really good pitcher, and last year she got me on the last out, so I felt like I needed to get on and get a hit,” she said. “I rounded second and I saw my coach [Teagan Walsh] and she was waving her arms and I’m just going and going and said ‘OK, maybe I got this,’ 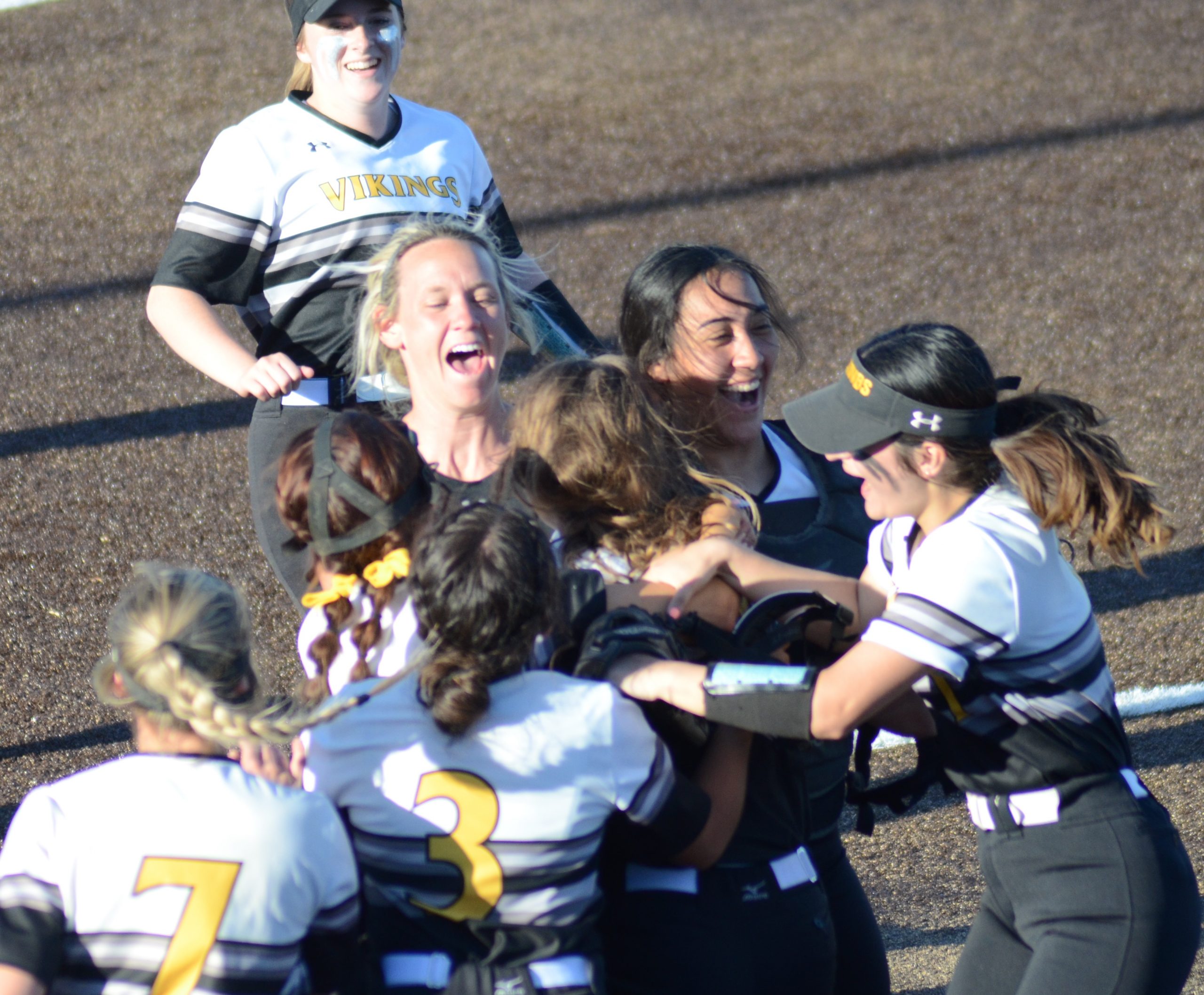 St. Laurence celebrates its first sectional title in team history after a 13-5 win over Richards on Friday. Photo by Jeff Vorva

Klonowski had four hits including a home run to help the Vikings beat Richards, 13-5, in the Evergreen Park Sectional title game on Friday.

Emma Lotus, Angelina Juarez, Maddie Lapinski and Fiona Sjostrom each had two hits in that game.

The Bulldogs have youth scheduled to come back next year, but coach Julie Folliard said the team will miss Mallo and shortstop Mary Jane Goodman, who will head to Division II Grand Valley State.

“Abby is elite,” Folliard said. “MJ is going to be missed. They have been around the program since they were little and coming to camps.”

The RedHawks’ supersectional game against Lincoln-Way East on Monday was postponed to Tuesday because of rain.

Marist hurler Brooke McNichols struck out 13 in the win while Maia Pietrzak drove Caroline O’Brien home with the winning run on a bunt single. 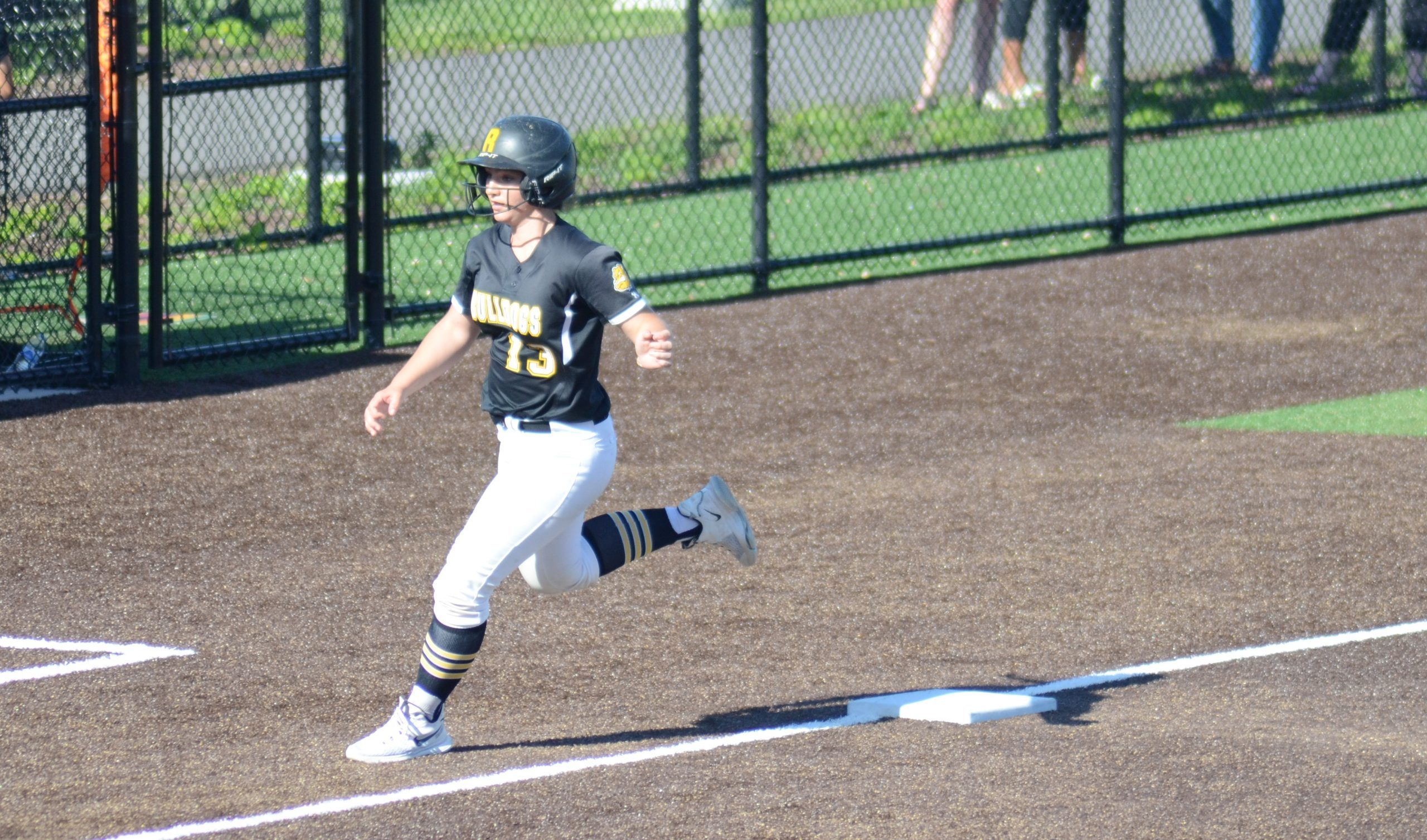 Richards’ Abby Mallo rounds third base after one of her two home runs in a sectional title loss to St. Laurence Friday at Evergreen Park. Photo by Jeff Vorva