Skip to content
June 8, 2022/Comments Off on All Exterior Contractors to the rescue 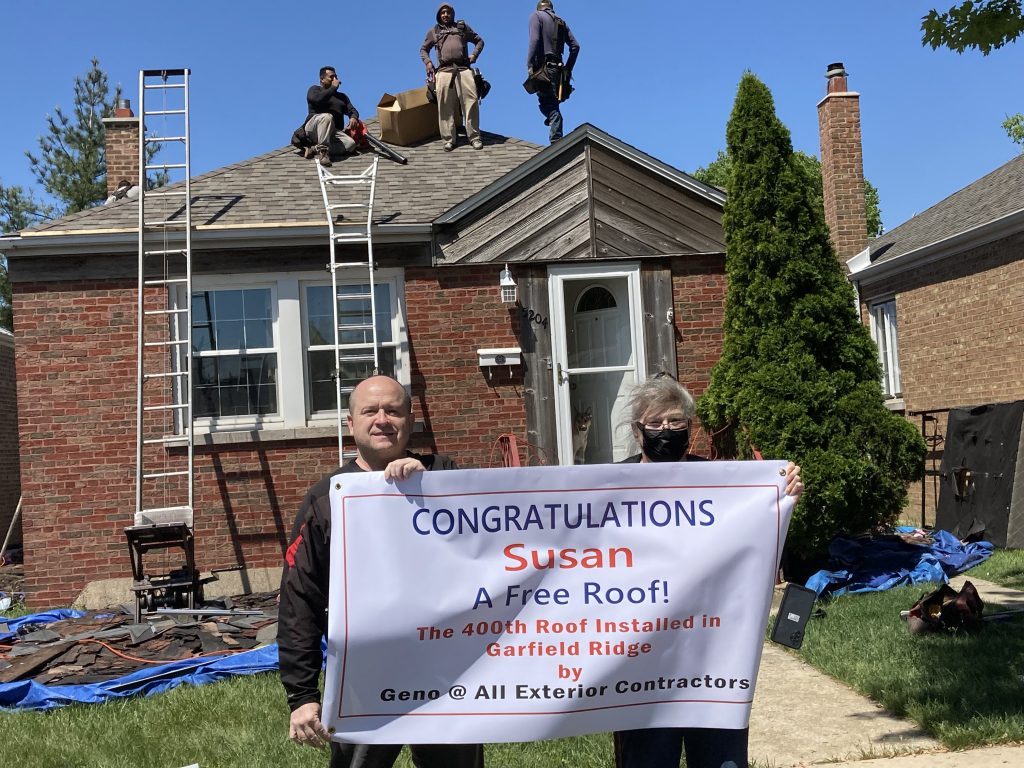 With an All Exterior Contractors crew busy on her roof above, Garfield Ridge homeowner Susan Donner (right) holds her congratulatory banner with AEC owner Geno Randazzo. --Photo by Tim Hadac

All Exterior Contractors to the rescue

Installs 400th roof in Garfield Ridge for homeowner in need

A company known for saving homeowners and business owners thousands of dollars has come through for a Garfield Ridge homeowner in her time of need.

Late last month, All Exterior Contractors donated a new roof (both house and garage) to Susan Donner, 68, who has owned her home near 52nd and Central since 1982.

It was the 400th roof installed in the Garfield Ridge area by All Exterior Contractors in recent years. 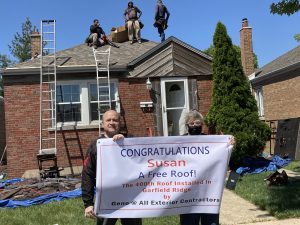 With an All Exterior Contractors crew busy on her roof above, Garfield Ridge homeowner Susan Donner (right) holds her congratulatory banner with AEC owner Geno Randazzo. –Photo by Tim Hadac

“I wanted to celebrate this milestone, not with a cake or a party or a bottle of champagne, but by making roof number 400 special and memorable,” said AEC owner Geno Randazzo. “I wanted it to be a roof that makes a difference in someone’s life, especially a senior citizen who could use a break.”

Judging by Donner’s reaction, Randazzo succeeded in a big way.

“Usually, I’m not a person who’s at a loss for words, but what Geno Randazzo has done for me has nearly left me speechless,” she told the Clear-Ridge Reporter & NewsHound. “I’m choked up just trying to describe what this means for me.”

‘Worked their butts off’

On a mild sunny morning, an All Exterior crew pulled up to the Donner home and got busy—tearing off decades’ worth of shingles and even repairing some water-damaged wood below. Then they installed brand-new roofing worth thousands of dollars. It should last for many years. All at no charge.

“We haven’t had the money to put on a new roof since we did it just after we moved in 40 years ago,” said Donner. “Geno’s workers just got busy, worked their butts off and even cleaned up after themselves—so much so that you’d never know they had been there. I’ve never seen anything like it.”

“My roof is something I have worried about every night—every night—when I went to bed,” she said. “Over the years, we’ve lost so many shingles, and the shingles still there were all loose. My roof has been a major cause of stress in my life—and then in one day, Geno wiped all that away.”

Like a number of homeowners in the area, Donner has had a run of bad luck.

The freight auditor job she had for 16 years was outsourced to Hong Kong, and at her age and in a depressed economy, it was difficult if not impossible to find a new position.

A member of what has been called the sandwich generation, she found herself taking in and caring for her terminally ill father, as well as a son with medical challenges of his own.

With an insurance company refusing to pay for the damage to her roof and a bank that balked at giving her a line of credit, Donner found herself squeezed financially and asking the “What now?” questions that a number of homeowners have.

An example for others

All Exterior Contractors is the only business that has been named the Garfield Ridge Chamber of Commerce’s Business of the Month, twice in recent years.

“All Exterior Contractors is well known for quality home repairs at a reasonable price,” said GRCC Board member Al Cacciottolo. “But on top of that, Geno Randazzo, has done so much for the community over the years, helping sponsor drives to assist military veterans, local school children and Thanksgiving dinners for senior citizens and more. Geno has set and continues to set an extremely good example that other businesses should follow.”

Randazzo’s company, which also handles home repair and home improvement projects inside and out, may be contacted at (708) 705-7900 or through allexteriorcontractors.com.