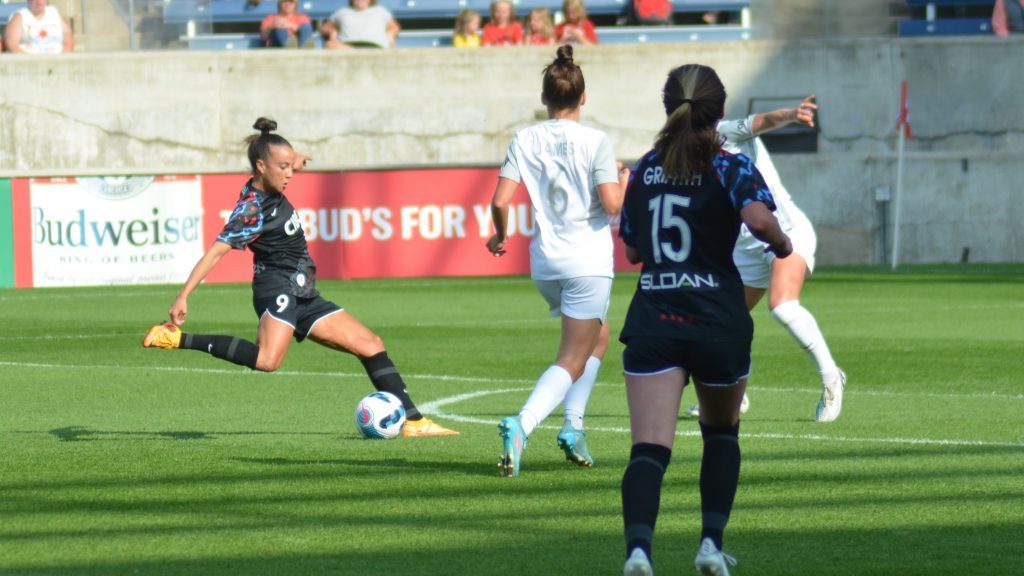 Mallory Pugh gets ready to connect on her fifth goal of the season as the Red Stars beat Orlando, 1-0 on Sunday. Photo by Jeff Vorva

The Chicago Red Stars finished the busiest stretch of their season unbeaten.

The five-games-in-16-days logjam ended with a 1-0 victory over Orlando on June 11 at SeatGeek Stadium in Bridgeview.

Mallory Pugh drilled her fifth goal of the season in the 10th minute for the Stars (4-1-3), who entered this week tied with the San Diego Wave for first in the NWSL in points, but are in second place because of goal differential.

Chicago gets back to a normal schedule this week when it visits Kansas City (2-4-2) Saturday.

The Red Stars were 2-0-3 in the rough stretch, and they are glad it’s over.

“It was incredibly difficult for us,” Stars coach Chris Petrucelli said. “Today was not much of a soccer game — we didn’t have a lot of legs. We committed a lot of late fouls. It was just reaching when we couldn’t move our feet anymore.

“But if you look at it overall — five games in that short amount of time — the results are pretty good. I didn’t know what to expect going into it, but I think we’re in a pretty good spot right now.”

Goalie Alyssa Naeher, who recorded her third straight shutout in the Orlando (2-4-2) match, said the Stars did a great job getting through it but hopes the NWSL does not allow something like that to happen again.

“It’s something like that needs to be addressed in the offseason,” she said. “It’s not just us. As a league, whoever is in charge of the schedule need to put together something that makes sense.

One of the reasons for the clogged schedule is the rescheduling of the Red Stars’ game against Washington, which was moved from May 7 to June 8 because the exhibition Challenge Cup tournament spilled over into the regular season and the Spirit made it to the finals.

For the second Wednesday in a row, the Red Stars faced Washington — a team that they lost to in overtime to in the NWSL Tournament championship last year.

Both ended in ties.

The first half against Orlando saw the Red Stars as the aggressors but in the second half, the Spirit brought in heavy-duty offensive weapons Trinity Rodman (daughter of former NBA player Dennis Rodman) and Ashley Sanchez.

The Spirit became the aggressors in the second half but could not put one into the net.

“Certainly, we wanted to take it to ‘em in the first half,” Petrucelli said. “Cleary, you knew what was coming on in the second half. But we didn’t come out playing in the second half trying to survive. It might have looked that way. We didn’t want it to look like that.”

The schedule was taking its toll.

“Our legs got a little heavy at the end,” said midfielder Danielle Colaprico, who took some big hits and hit the ground in the second half.

A silver lining is that the Red Stars caught Washington while it was going through a heavy workload as well, which is why Sanchez and Rodman didn’t play a full match.

“They are a very good team, and they are not quite where they want to be now in the standings, but they will be,” Petrucelli said. “So, taking two points off of them is OK. It’s certainly not ideal but it’s not a killer for us.” 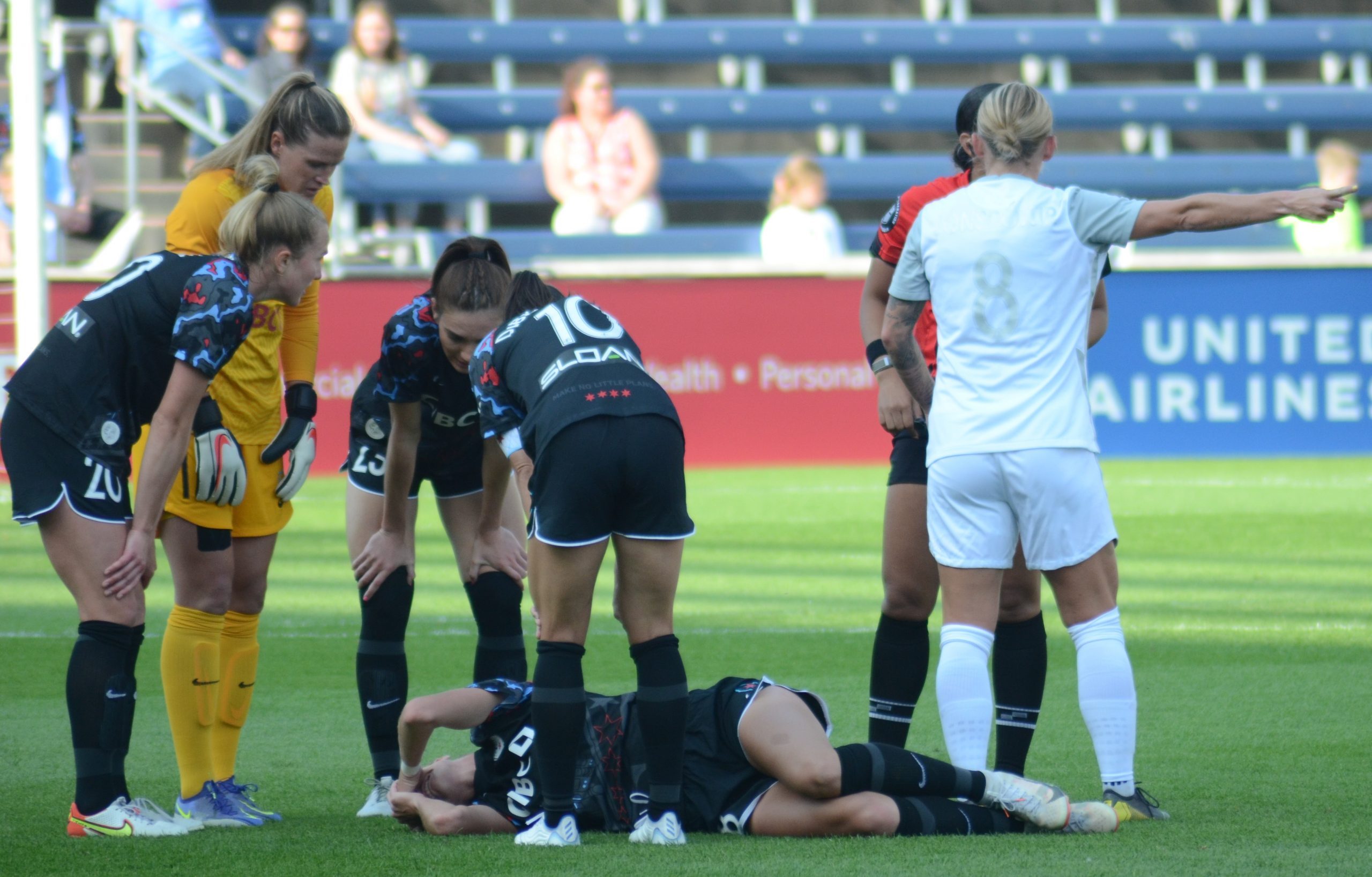 Red Stars defender Kayla Sharples is in pain Sunday against Orland and had to be helped off the field. Photo by Jeff Vorva

In the 20th minute of the Orlando game, Kayla Sharples suffered an injured knee and stayed on the grass for three minutes before she had to be helped off the field.

Sharples, Orland Park native Tatumn Milazzo and Zoe Morse helped joined Naeher in helping to preserve three straight clean sheets. With star defender Tierna Davidson out for the season with an injury, this could become a problem if Sharples is out for a length of time.

Pugh, Naeher and Vanessa DiBernardo are on the preliminary U.S. national team roster that will participate in the Concacaf W Championships.

Bianca St-Georges made the preliminary team for Canada.

The tournament takes place from July 4-18 for qualification to the 2023 FIFA World Cup and 2024 Summer Olympics.

Fire homegrown goalkeeper Chris Brady was selected to the final roster to represent the U-20 U.S. Men’s Youth National Team in June at the Concacaf U-20 Championship.

The tournament is being played in Tegucigalpa and San Pedro Sula, Honduras, and started on June 8. It will run through July 3.

The Naperville native has logged four starts for Chicago Fire FC II in MLS NEXT Pro. In those appearances, he’s recorded a victory, two clean sheets and 20 saves. 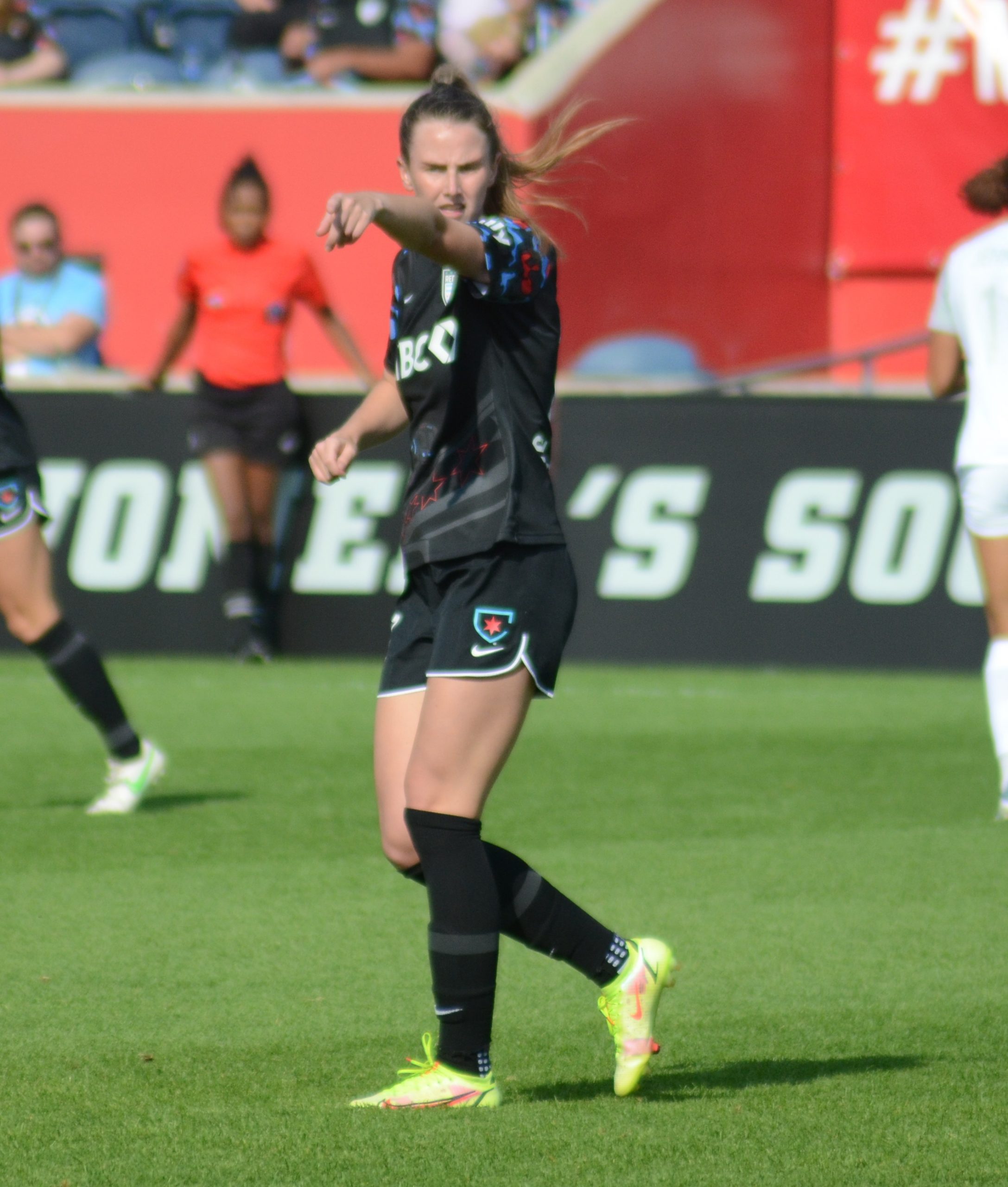 Australian native Chelsie Dawber made her Red Stars debut Sunday and played the first half in a 1-0 victory. Photo by Jeff Vorva