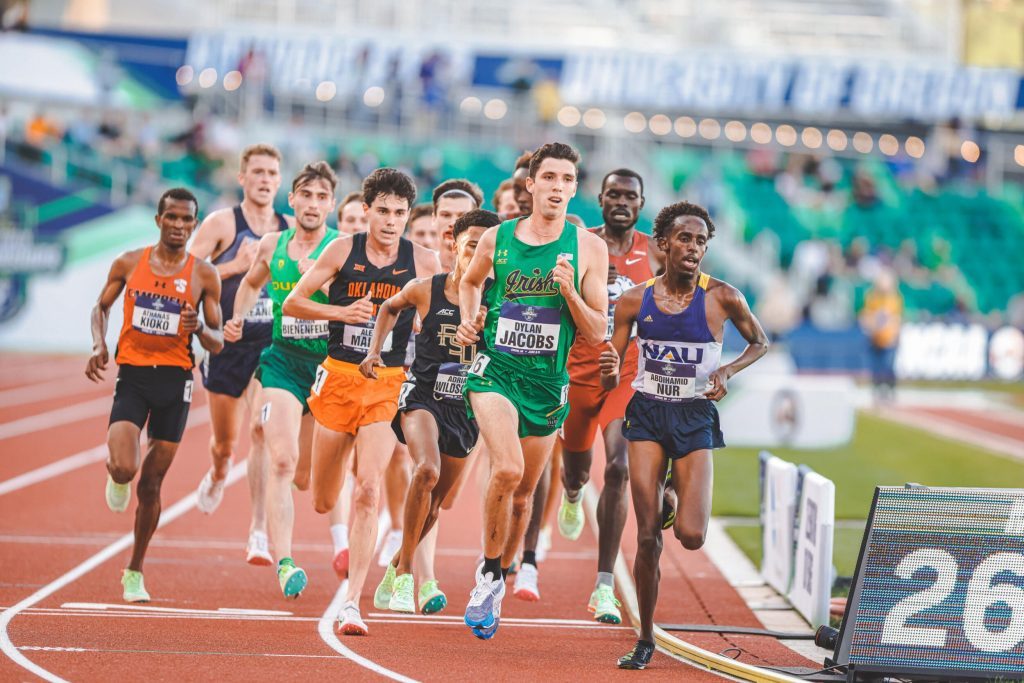 Dylan Jacobs won an NCAA championship in the 10,000-meter run on June 8. Photo courtesy of the University of Notre Dame

Add a national championship to Dylan Jacobs’ already impressive list of accomplishments in 2022.

The Orland Park resident and Sandburg graduate broke a four-minute mile on Jan. 22 and set an American college indoor record in the 5,000-meter run with a time of 13:14.04 seconds on Feb. 12.

On June 8, he managed a rare accomplishment in the 10,000-meter run, winning an NCAA Track and Field national championship with a time of 28:12.32 in Eugene, Oregon.

He actually fell during the race and had to recover.

“I stepped on the rail and went down,” Jacobs told ESPN after the race. “I was like, ‘well, better get up and finish now.”

That allowed him to become the first Irish runner to win the event since Ryan Shay in 2001.

“I mean, I’ve dreamed about this,” he said after the race. “I’ve trained with, I think, the best team in the country, the best guys. We have four of them out there, and we’ve prepared every day to come out to nationals and to perform. And fortunately, it worked out today where I was able to take it home.”

She played in the North’s 86-81 win over the South and scored two points. She is heading to play at the University of St. Francis (Joliet) next season.

Love it or hate it, transfers in boys high school basketball are making the news as summer league and tournaments commence.

Powerhouse St. Rita, which already has Division I prospects James Brown, Morez Johnson (who both made the Pangos All-American Camp All-Star Team last week) and three other regulars on the roster, added Nojus Indrusaitis, who averaged 22.6 points per game as a sophomore for Lemont last season.

The Mustangs were already ranked 23th in the nation in the Season Ticket Way Too Early Top 25 before these transfers.