Skip to content
June 13, 2022/Comments Off on Baseball Class 4A State Finals: Brother Rice takes third with romp over McHenry 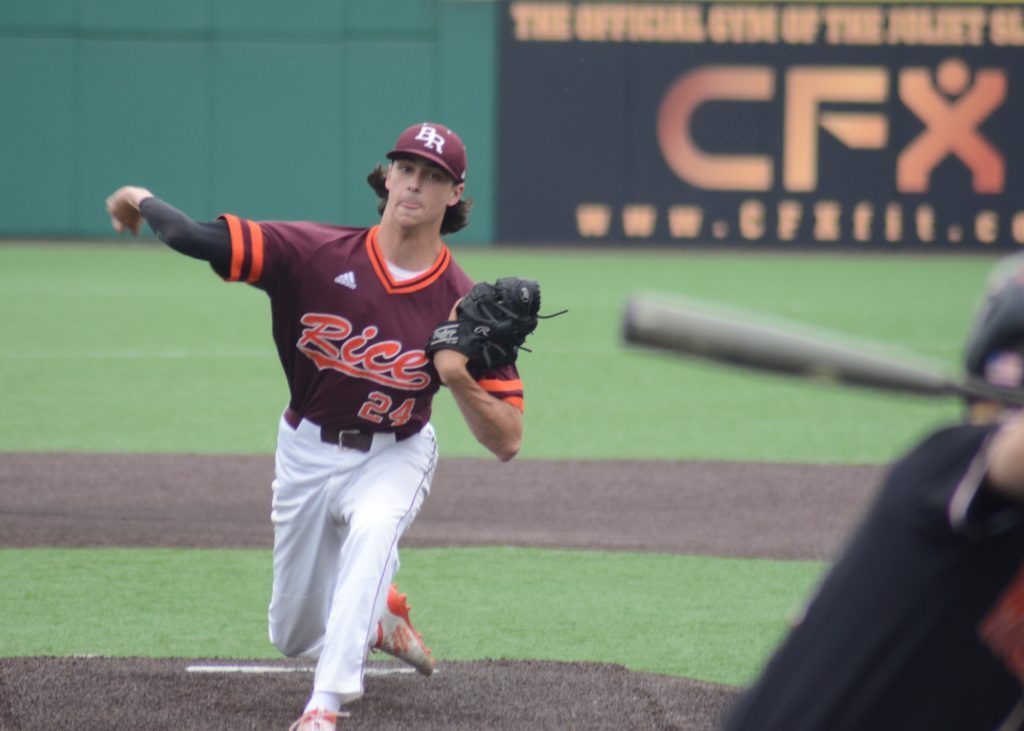 Jake Fenton throws a pitch in the first inning of the IHSA state third-place game on Saturday. Fenton had not pitched since mid-April because of a knee injury. Photo by Jeff Vorva

Some view state third-place games as a waste of time.

It’s usually the game nobody wants to be involved in after having their dreams of winning a state championship crushed by a loss in the semifinals.

But the third-place game in the IIHSA Class 4A baseball state tournament produced a special moment for one Brother Rice pitcher.

Senior Jake Fenton sustained a knee injury during the regular season and underwent surgery, with the thought he wasn’t going to return to the hill for the Crusaders this season.

But the Loras-bound Fenton got the knee back in shape, and Crusaders coach Sean McBride let him start and pitch an inning in the third-place game as Brother Rice beat McHenry, 14-4, in five innings at Duly Health and Care Field in Joliet on June 11.

“Man, to be on an amazing team with such a hot start, it was honestly awful to come out,” he said of the injury. “But having all of these guys behind me and knowing they were still my family, even though I wasn’t playing anymore. I was able to show them I was still here even though it was one inning. It meant so much to me.

“It was one final hoorah.”

Fenton said he has been dealing with knee issues for three seasons, but this year made six appearances and was 3-0 with a 1.65 ERA with 21 strikeouts in 17 innings before the injury. Fenton, Cole Van Assen and Dylan Warda were forming a seemingly unbeatable trio.

But in a game on April 16, the scar tissue in his left knee was flaring up. There were times he couldn’t move the knee after he heard “a pop and a click.”

After the surgery, he was told it would be six-to-eight weeks before he could return, and he was cleared for duty for the state tournament.

He gave up a hit, but that runner was erased on a double play and Fenton left the game with a shutout inning, facing the minimum amount of batters and throwing 16 pitches.

“We’re all competitors and we want to win, but this is about baseball and the experience for these kids,” McBride said. “I just feel that at Brother Rice, there is no better experience for a young student athlete to play baseball.

“To see Jake go through what he did … he was dealing at the beginning of the year. He was doing it all essentially on one leg. Nobody knew if he could come back. It just shows the toughness of him and the toughness of our group. He was at every practice. It meant the world to get him our there and pitch with his brothers one last time.” 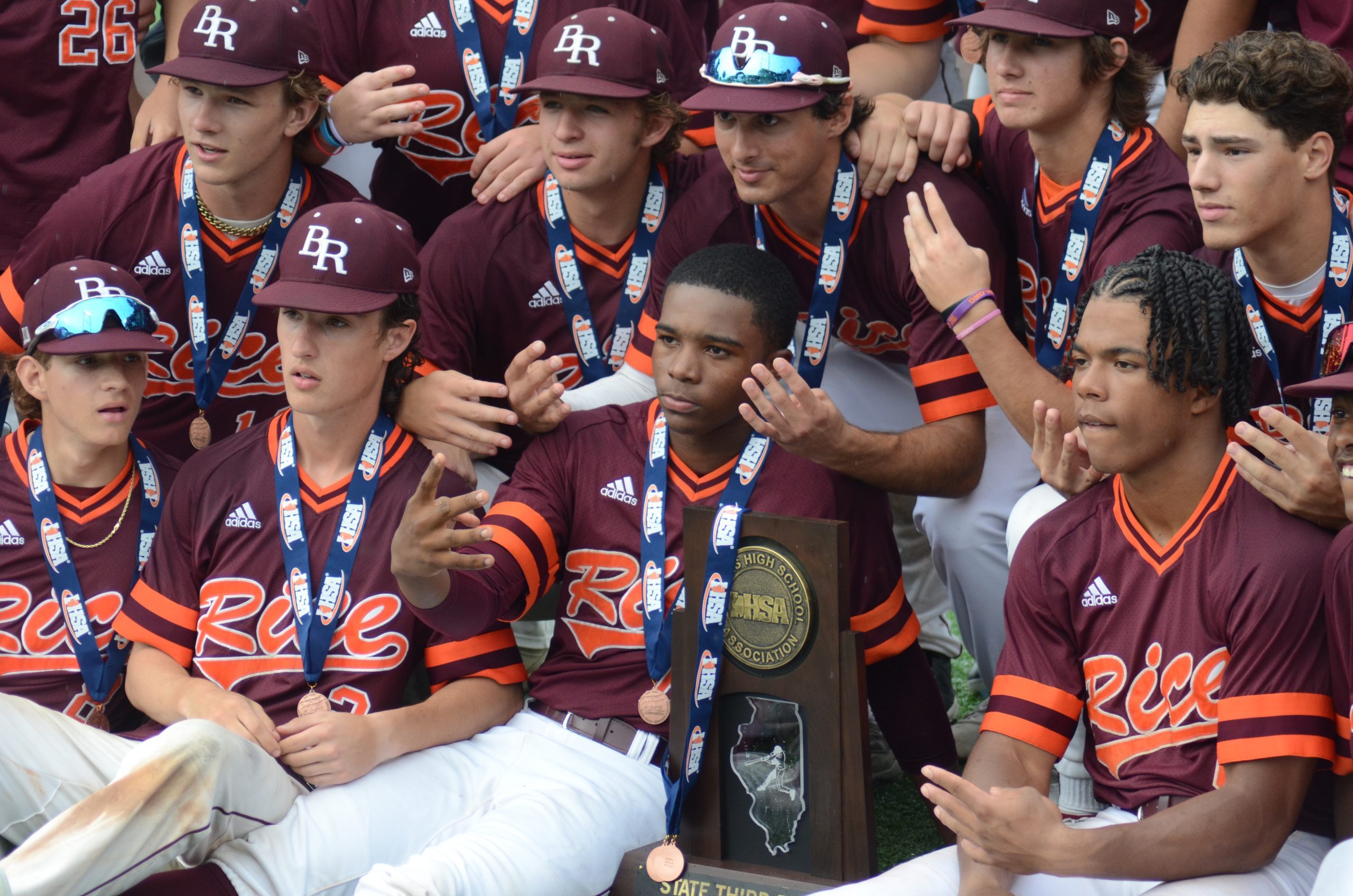 McHenry (30-11) grabbed a 3-0 lead, but in the bottom of the third the Crusaders (37-6) exploded for eight runs. No. 8 hitter Beau Polickey scored twice in that inning.

Brother Rice scored two more runs in the fourth and four in the fifth to end it via the 10-run rule.

As a nice consolation prize, the Crusaders set a school record for wins, which is a huge accomplishment given the national schedule that they played.

Brother Rice’s dreams of a state title were dashed on Friday in a 7-4 loss to Edwardsville, which went on to win the state title.

The Crusaders struck first, building up a 3-0 lead heading into the bottom of the third, but the Tigers scored four in the third and three in the fourth and held the high-powered Crusader offense down to one run on three hits the rest of the way. 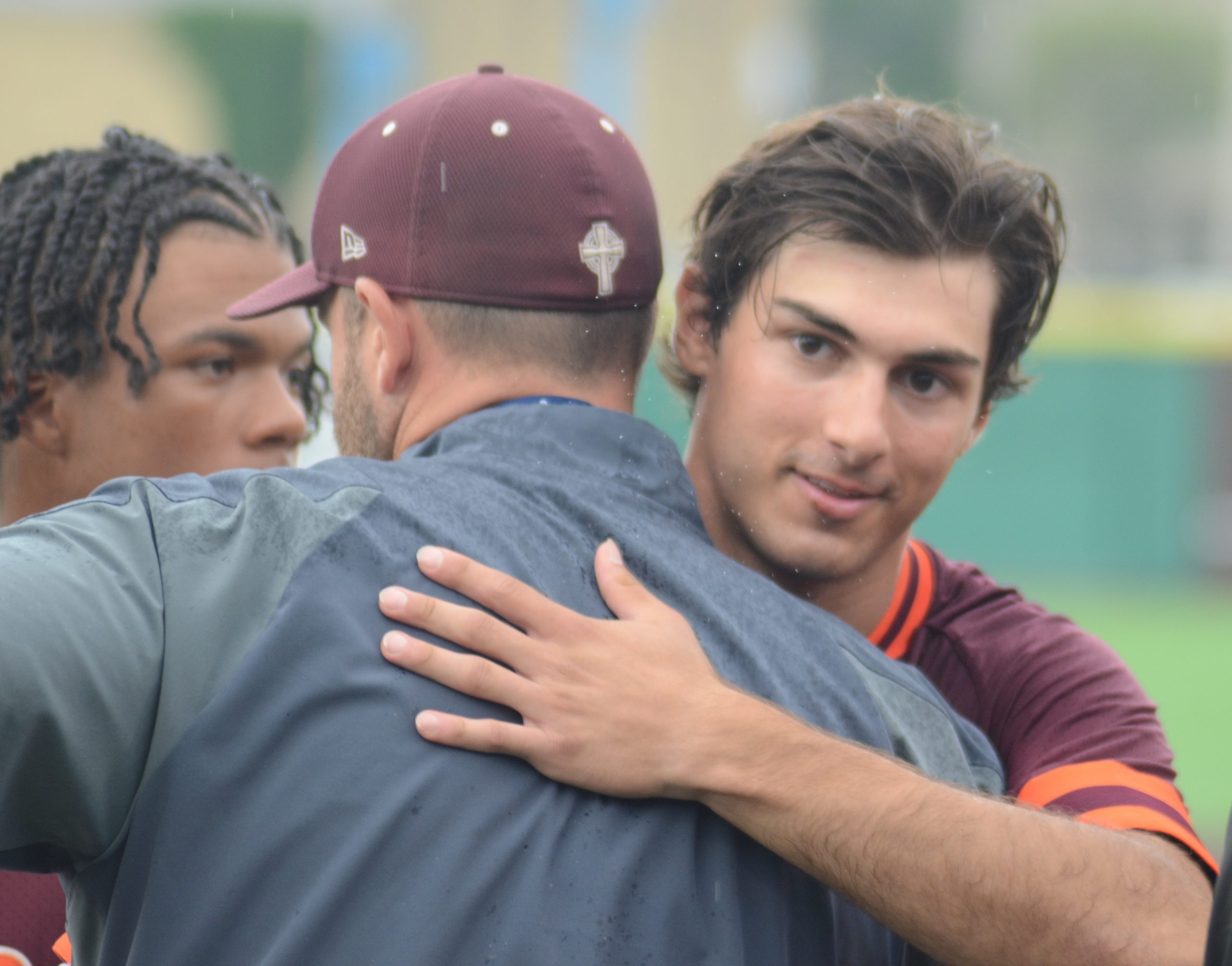 Zion Rose (left) and Jack Lausch get together with Brother Rice coach Sean McBride during the medal ceremony at the IHSA state baseball tournament. The Crusaders finished third in the state in Class 4A. Photo by Jeff Vorva