It doesn’t happen often, but voters in the newly drawn 6th Congressional District have an unusual choice in the Democratic primary.

Because of redistricting, two sitting members of Congress are going toe-to-toe for the nomination in the June 28 primary.

The district covers the Midway Airport area, Chicago’s Beverly neighborhood and the area around Orland Park then stretches north to Glen Ellyn and Elmhurst. 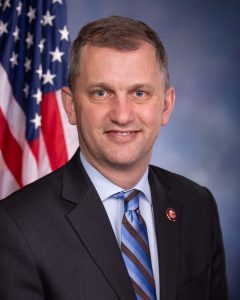 Whomever wins between U.S. Rep. Sean Casten and U.S. Rep. Marie Newman will be the odds-on favorite to win the two-year seat in Congress come November.

Asked about the odd situation, Casten found a reason to embrace it.

“There’s something beautiful about redistricting in the sense that you have to go out and meet a lot of new people,” Casten said.

“It’s a different kind of district with different issues, but I feel good about where we are, where we are connecting,” Casten said.

Rest assured, Casten, 50, wants to win his third term in Congress: “None of us are here to win silver medals.”

Newman, 58, obviously agrees with that as she seeks a second term. She defeated longtime Rep. Dan Lipinski two years ago after narrowly losing to him in the 2018 primary.

“I’ve learned when you convene all the stakeholders and talk about the problems … you are best disposed to develop solutions together and bring that legislation to D.C.,” Newman said.

With advisory councils, not to mention 500 meet-and-greets in the past two years, Newman said “I understand this district at a molecular level.”

Inflation and gun violence, each candidate said, are high among the concerns of voters they’ve met on the campaign trail.

“What are we going to do to protect folks?” Casten said, noting the House recently passed gun control plans that will probably not be approved by the Senate.

“Of course, we still have the saga of Ukraine and what’s going to happen there,” Casten said. “Yet when you sit down and chat with people, ask them if they are better off than two years ago, people are really pretty positive.”

Newman said she’s always made a point to have a Republican member of Congress co-sponsor her bills because she wants people to know the two sides can work together.

“We agree on a lot more than we disagree,” Newman said.

Asked about choosing between two members of Congress, Casten said: “If the voters are educated, they’ll make the right decision.”

Each are pro-choice, and have solid records with labor, Casten said.

Newman recently went public about her own story about deciding to have an abortion was she was 19. She decided to discuss it when the Supreme Court memo on Roe v. Wade was leaked.

“We need to be real about this. That’s why I started talking about it,” said Newman, who is married, resides in La Grange and has two adult children.

She fears Roe v. Wade being struck down could lead to more restrictions on women in politics and business.

“Only 28 percent of Congress is women, and 51 percent of the population is women,” she said. “That’s illogical.”

Casten, who lives in Downers Grove said a big difference with Newman is his focus on climate change, but Newman has also made climate change part of her legislative focus.

A visit to each candidate’s website reveals what they hope to accomplish on a wide range of issues.

She’s also worked on a bill that allows better access for business owners to needed capital, with minorities and female owners at the front of the line, so to speak.

Regardless of the outcome, Casten is hoping people come out and vote.

“The thing I emphasize for everybody is democracy works only if people participate,” he said. “There are a lot of people in Washington who are trying to make it harder for people to vote, trying to convince people it’s not worth their time, and they’re having success.

The most important thing is to not get demoralized. Be educated. As long as you do that, we’ll pass this democracy on to our children better than it was,” he said.

Newman said she finds satisfaction in working with constituents and finding solutions to their problems.

She expects a close race on June 28: “It’s going to be squeaker.”

The winner faces whomever prevails among six Republican candidates.

Editor’s note: Casten was interviewed for this story on June 10, three days before his 17-year-old daughter was found dead in the family’s home. Newman, interviewed on June 14, has released a statement expressing her deep sorrow for the Casten family.