“A gun is only dangerous if it is loaded,” Dart said. “Right now, there are thousands of individuals in Cook County who can walk into a gun shop and buy ammunition even if their gun permit is revoked for being a felon or they are facing a domestic violence charge.

“That makes no sense,” he continued. “Lawmakers must close this loophole and help make gun regulations work in Illinois.” 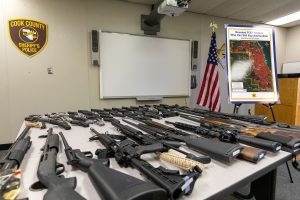 In Cook County, 32,492 Firearm Owners Identification (FOID) cards have been revoked. But nearly 60% of them, or 19,238, have not turned in their cards as required under the law.

Beyond that, 24,421 have failed to transfer their weapons to police or a legal gun owner as required.

FOID cards are revoked under the law for serious reasons. For example, of those who have not turned in their card in Cook County, 6,168 had a felony indictment, 4,318 had an order of protection against them, 4,108 had a mental health concern and 153 were considered a fugitive from justice.

Before selling a firearm in Illinois, gun dealers are required by law to check the validity of a buyer’s FOID card and run a background check. Yet, they are not required by law to do the same when selling ammunition. That means someone with a revoked FOID could buy ammunition simply by presenting the card, even though it is invalid.

“This loophole must be closed,” Ford said. “We can’t have people charged with serious crimes or deemed a danger to others allowed to easily buy deadly bullets. This is not really debatable. It is common sense.”

State Sen. Jacqueline Collins is supporting the bill in the state Senate.

“It is scary to think about the thousands of people who have had their gun permits revoked, yet who can still buy ammunition at any gun dealer in Illinois,” she said. “This is outrageous, and we must fix this.”

Dart is calling on lawmakers to take up the legislation during their next meeting. Meanwhile, he is also sending a letter to licensed firearm dealers in Cook County asking them to voluntarily check the validity of a person’s FOID before selling ammunition.

“While we work on the legislative front, please consider joining me in this commonsense approach,” Dart wrote to firearm dealers. “Addressing the rise in gun violence in our state and communities begs all stakeholders to consider helping. Together we can make our communities safer and prevent future tragedies.”