Skip to content
June 22, 2022/Comments Off on Update: Morrison, Gorman duking it out for county commissioner spot

In what is one of the nastiest races around, Sean Morrison and Liz Gorman are duking it out for a commissioners’ spot on the Cook County Board.

Gorman had the job in the 17th District from 2002-2015 but gave it up to work in the private sector. Morrison took over and had Gorman’s blessing at the time.

But that was a while ago and now Gorman wants the job back and mud is being flung. One anti-Gorman citizen posted a story on a news website that she is the “Mike Madigan of Republican party politics.” A video ad transposed Gorman’s face over a donkey. And she wasn’t happy when a mailer came out with photos of her and her husband, Gerry, had their photos transposed in a lineup.

Anti-Morrison people are up in arms that Morrison is defending a worker under his watch who was charged with sexual harassment. They are not thrilled that a story recently published about special attention he received by Palos Park police. Gorman has also called him “weak” and that he “doesn’t get it.”

And that was at the beginning of the campaign. 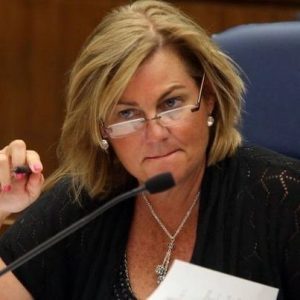 Gorman is also not a fan of this campaign.

“His campaigns have been built on mudslinging and smear campaigns and not issues,” she said. “It’s gone so low.”

The election is Tuesday and despite the fact that each candidate is more than willing to trash the other, both have some solid backgrounds to brag about while in the commissioners’ chair.

Morrison, 54, of Palos Park, said that as a Republican on an overwhelming Democratic board, he had to make waves over the years and he is proud of some of the things he helped fight for.

That included repealing the hated soda tax, decreasing country government by merging offices to save $8 million a year, organizing private-sector business, commerce and industries, cutting $285 million out of the budget, refinancing bonds to save another $800 million and to turn around a hospital system that was losing $175 million a year in collective revenue. 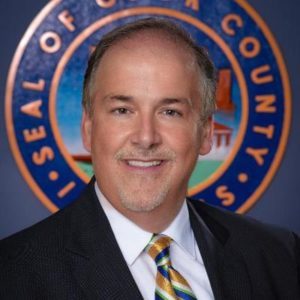 His future plans, if elected, are to make sure $2 billion in money from the American Rescue Plan Act and other grants are spent with accountability, to continue to support the police and to keep an eye on fixing roads and bridges.

He added that the gas tax revenue will double because of the higher prices of gasoline and wants that money to a good cause.

“Mark my words, watch this, we’re going to take in a lot more in the next 12 months in our taxes,” Morrison said. “That’s an actual cause-and-effect. It’s purely math.

“Twelve months from now, we will come in $500 million higher in gross sales tax and fuel tax than we projected for this year. Are we going to return that to the people or are we going to lower property tax? Let’s take that $500 million and pay more legacy debts to the pensions.”

Gorman, 57, is an Orland Park resident who was also not shy against bucking up against others in county government.

Gorman said she led a charge to repeal a 133 percent sales tax hike. She also opposed several other taxes and said she helped balance a budget in 2010 that had a $500 million deficit. She said that she helped sponsor business incentive programs to attract and retain businesses in the county.

Her future plans, if elected, are to support all first responders, take State’s Attorney Kim Foxx to task for being “soft on crime,” continue her fights on liberal tax hikes and to being in infrastructure improvements with a priority on flood mitigation in the district, which encompasses the south suburbs.

“I want to bring services into the 17th,” she said. “I need to put us back on the map. I’ve always been able to deliver. I want to bring in road projects that are falling through the cracks. It’s sad – one village had to hire a lobbyist to get things done in the county.

“I know how to get things done. I have an impeccable record and a distinguished track record to prove it.”

The winner of this primary takes on the Democratic survivor between Orland Park’s Dan Calandriello and LaGrange’s Lou Gale in November. Gorman fears that the way things are lining up, it’s possible that the Gorman-Morrison winner could be the lone Republican on the board.

“It’s probably the most important seat on the county board right now,” she said.