Mallory Pugh, who has six goals in seven games, will miss three games for the Red Stars in July because she will be playing with the United States in a World Cup qualifier. Photo by Jeff Vorva

Having world-class players on your team is a blessing.

But during times like these, it can also be a curse.

World-class players help NWSL teams win games. They also miss chunks of time during the season because of their commitments to playing in international competitions.

For much of July, the Chicago Red Stars will be without goal-scoring machine Mallory Pugh and one of the world’s top goalies in Alyssa Naeher. The two will be busy through representing the United States in a World Cup qualifier in Monterrey, Mexico.

Bianca St-Georges (two goals this season) will miss games while playing for Canada.

The Red Stars, 4-1-4 and unbeaten in their last seven games, visit NY/NJ Gotham on July 2, host North Carolina on July 10 and visit Houston on July 16. The three should be back for the July 30 game when the Red Stars host San Diego at Soldier Field in Chicago as a part of a doubleheader with the Fire.

Pugh has six of the Red Stars’ 14 goals this season, despite missing two games because of an injury. Naeher had a string of three straight shutouts in June.

First-year coach Chris Petrucelli is ready to battle without three of his big guns.

“One of the things I’m happy about it that we have played a lot of players,” he said. “We have a lot of depth. We’ve used players in different situations. 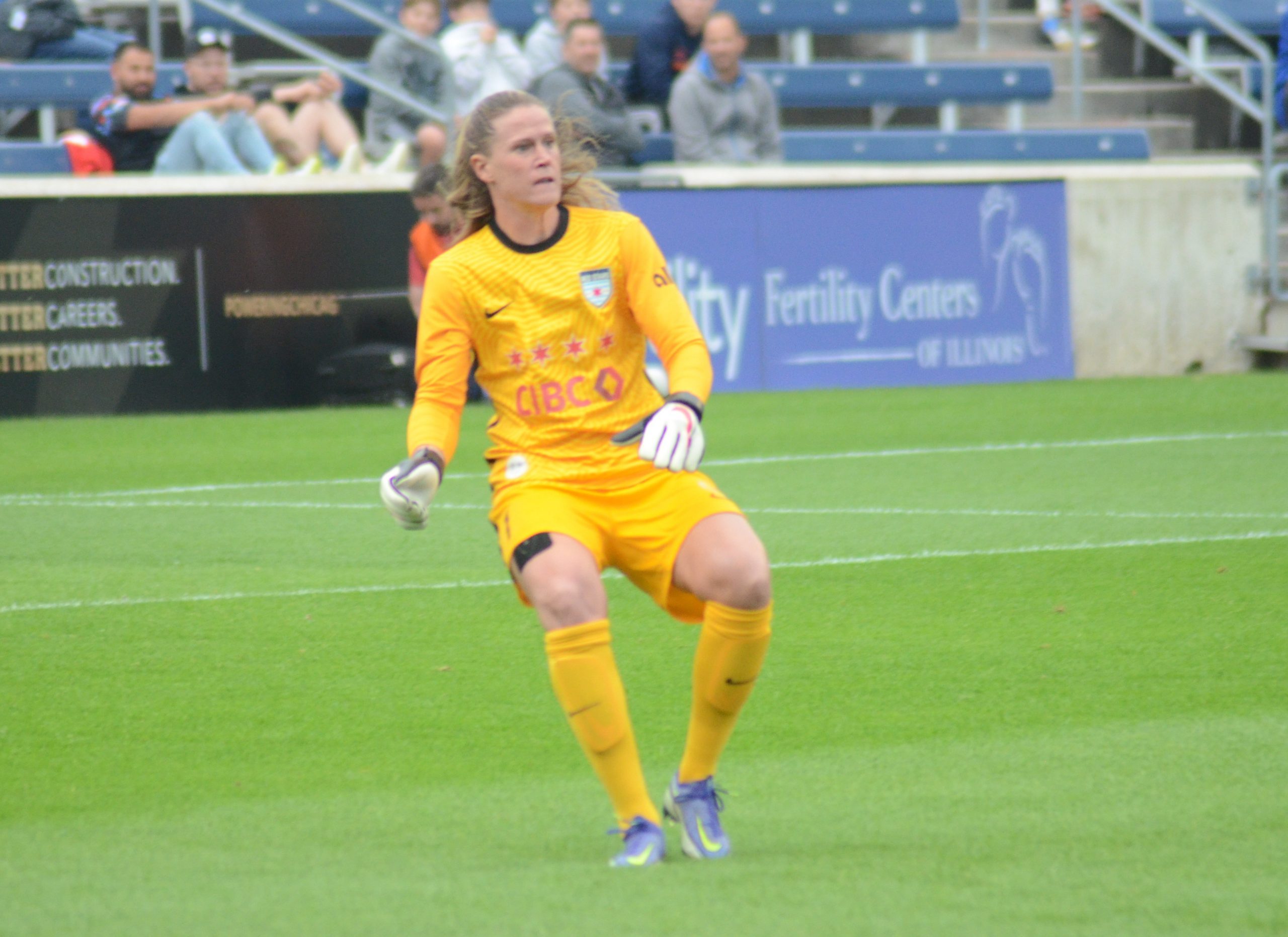 Goalie Alyssa Naeher, who had three straight shutouts in June, will miss three games in July to represent the United States in a World Cup qualifier in Mexico. Photo by Jeff Vorva

With a short break in the season, Pretrucelli reflected on the first nine games in his tenure. He is happy with the progress his team has made in 2022.

“Overall, it’s been really good,” he said. “Early, we were giving up goals on set pieces and we solved that a little bit. We’ve made progress in some areas. If you go back and watch us play in the Challenge Cup and watch us play now, we’re a better team (now). We hope we’ll be an even better team in July and August and September.”

The next day, her replacement was named.

Sitch took the men’s soccer head coaching position at the University of Chicago in April, right at the start of the Challenge Cup season. After a 2 ½-month search, the Red Stars have named Morinao Imaizumi to take her spot.

“Imaizumi is well-established and incredibly thoughtful in his approach, with experience coaching some of the best players in the game,” Michelle Lomnicki, Red Stars associate general manager, said in a statement. “We are thrilled to bring in a coach with his knowledge, coupled with his vision and playing philosophy, that perfectly aligns with our club. We are excited to bring in Ima to round out our coaching staff.”

“I’m excited to add Morinao to our team. He’s a highly respected and extremely talented coach,” Petrucelli said. “He has worked with some of the world’s best players and coached some outstanding teams.”

Imaizumi, a Japanese native, held multiple coaching roles at the collegiate and international levels. He was a crucial member of the Japan Women’s National Team as an assistant coach in 2004, where he coached current Red StarnYuki Nagasato in the Olympics. The 61-year-old was the head coach of the U-17 and U-20 teams from 2004 to 2006.

“I’m excited for this fantastic opportunity,” he said. “As I’ve progressed in my career, I’ve always kept my eyes open for a chance to work on the professional level. I feel very fortunate to be selected to work with the Red Stars and their many talented players.”

“This ruling will have a resounding detrimental effect across the nation, particularly in marginalized and underserved communities,” the Red Stars’ statement said. “We believe reproductive health choice are fundamental human rights, and the right to choose should remain accessible, affordable and equitable for all.”

The NSWL’s statement read: “The Supreme Court’s ruling today denies individuals in this country the full liberty and equality that is the cornerstone of a just society.

“Reproductive rights are human rights. Until every individual has the same freedoms as their neighbor, our work is not done. We will continue to make our voices heard. The NWSL is more than just a soccer league; we are a collective who will stand up every day for what is right.”

Victor Bezerra scored a pair of goals andAlex Monis and Ryan Quintos each added one in the Chicago Fire II’s 4-3 victory over the New England Revolution II in an MLS NEXT Pro game on Sunday at SeatGeek Stadium in Bridgeview.

“Yeah, I thought it was a really good performance from the boys,” said Bezerra. “I kind of felt like after the first goal, a second one was definitely coming.”