Several of the people and organizations involved in the Hale Community Garden gathered for a photo last week when 13th Ward staff dropped off new black dirt for the project. They are (from left) Moe Zahdan, 13th Ward supervior; Anita Cummings, executive director of the United Business Association of Midway; Samantha Kyme, Hale dean of students leading the environment/culture program; Hector Villalobos and his children, Liliana and Leonardo Villalobos of Clearing. --Supplied photo

The United Business Association of Midway has partnered with Hale School to expand the community garden outside the school at 6140 S. Melvina.

Hector Villalobos, a Hale parent and local Boy Scout troop leader, digs into one of the plant boxes he built for the newly expanded Hale School Community Garden that he tends with students and members of the United Business Association of Midway at the school. – Supplied photo

“I have always believed that a strong partnership is what gets anything accomplished,” said Anita Cummings, UBAM executive director. “This is a cornerstone of our organization. We work with business and political leaders and residents to benefit the entire Midway Airport area.”

She said the organization got involved in the Hale garden after efforts by members of the non-profit Garfield Ridge-Clearing Community Garden to obtain a space for their own community garden fell through last year. Members of the group, including Vanessa Sepcot, have lent their support and knowledge of gardening to the project. Sepcot also provided the mulch for the garden this year. Luis Gaytan, public health ambassador of Envision Community Services, another UBAM member, is involved too.

Microsoft Corp. has also promised a grant that will allow Hale Community Garden to expand further of the next year, and add peach trees, strawberries, grapevines and other items to it.

“We already have tomatoes, cucumbers, zucchinis, peppers and some herbs growing there,” said Hector Villalobos, a Hale parent and Local School Council member who has been spearheading the community garden since last year.

“It actually started two years ago, but some things went wrong originally. It really took off last year,” he said.

Since then, the Clearing resident has taken the lead in tending to the garden, much as he does the garden at his own house two blocks away, and his father’s as well.

Villalobos said Hale kindergarteners got involved this year, and planted sunflowers, which they plan to do annually.

On weekends, he said, members of Boy Scout Troop 1439, which he leads, also volunteer their time to water and care for the plants. The Boy Scout troop is sponsored by Two Holy Martyrs Parish.

“Community residents are welcome to come by and pick the vegetables we grow and take them home. That is what it is there for. We just ask that they pick a weed or two also,” said Villalobos. His children, Liliana, a sixth-grader at Hale, and Leonardo, a graduate and freshman at Hancock High School, helped unload the dirt last week and regularly help out in other ways.

“Hector (Villalobos) was the brainchild behind this, and the Garfield Ridge-Clearing Community Garden and Envision Community Services were instrumental in moving it forward,” said Cummings. “Vanessa’s knowledge and hands-on assistance were very helpful.” 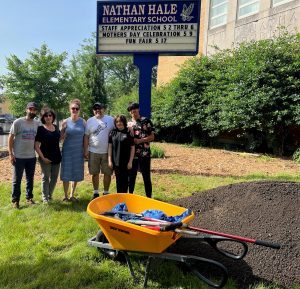 Several of the people and organizations involved in the Hale Community Garden gathered for a photo last week when 13th Ward staff dropped off new black dirt for the project. They are (from left) Moe Zahdan, 13th Ward supervior; Anita Cummings, executive director of the United Business Association of Midway; Samantha Kyme, Hale dean of students leading the environment/culture program; Hector Villalobos and his children, Liliana and Leonardo Villalobos of Clearing. –Supplied photo

She said that Samantha Kyme, dean of students at Hale and leader of the culture and climate program there, serves as point person for the community garden project.

“I am not directly involved. But the important thing is, the garden really is for the community,” said Hale Principal Dawn Iles-Gomez.

“My office looks out on to the front of the school, where the garden is, facing Melvina,” said the principal. “It was great to look out and see the parents out there, tending to and picking the vegetables.”

“We’re here for summer school. But they took care of the garden when we are on vacation, which we appreciate,” said Iles-Gomez. “Hector literally built the wooden garden boxes,” she added. “He even comes here on Sundays.”

The principal said she was happy to learn that Microsoft is going to award the grant the school applied for as well. “It is all due to a combination of our staff, students and the community.”

Iles-Gomez said she knows the principal of the Chicago High School for Agricultural Sciences, at 3857 W. 111th St., and is honored to be compared with the more in-depth type of produce-growing that goes on there.

“We’re in the baby phases of that. We are just beginning,” she said.

By HANNAH MEISEL Capitol news Illinois hmeis[email protected] SPRINGFIELD – Exactly 38 months after the World Health Organization declared COVID-19 a global pandemic, Illinois will no longer be under a disaster proclamation as of May 11, Gov. JB Pritzker announced Tuesday. That’s the same day President Joe Biden will end the national public health emergency, which…