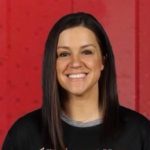 Coaching some of the country’s top athletes, Bugarin was part of five USAV top-five finishes and led the team to consecutive top 10 national rankings in her last two seasons. She also served as the recruiting coordinator for the club.

“Coach Bugarin has a track record that speaks for itself,” said St. Laurence Athletic Director Tim Chandler. “With over a decade coaching volleyball at the highest level, I am confident that she will continue the development of our current players while also making it a program that players will want to be a part of. Coming off a historic season, the program is in a great position to take the next step, and I know Coach Bugarin is the right coach for the job.”

Bugarin is a parishioner at St. Daniel the Prophet with her husband and three sons. Prior to her coaching career, she played volleyball at Northern Illinois University and earlier at Queen of Peace High School, where she graduated in 2004 and was inducted into that school’s Athletic Hall of Fame with the 2003 volleyball team.

“I am incredibly honored to be joining the St. Laurence community as the head boys volleyball coach,” Bugarin said. “I have been attending Viking athletic events since I was a little girl, watching my brothers contribute as multi-sport athletes while I sat in the stands and chanted along to the Viking Fight Song.

“I am thrilled to lead the next generation of student athletes through St. Laurence’s strong tradition of academics, community and athletics,” she continued. “I would like to thank President Joe Martinez, Director of Operations Amy Lapinski, Athletic Director Tim Chandler and the members of the leadership team for their passion and commitment to the volleyball program, as well as for the faith they have in me to continue to lead the rich history and tradition of athletic success.”

The new coach inherits a team coming off its best season in program history, setting the school record for single-season wins and advancing to the IHSA Regional Championship. She will replace Ellen Yopchick, who stepped down as head boys’ volleyball coach following the 2022 season. Yopchick will continue to coach the girls’ volleyball team.

Boys’ volleyball players can meet Bugarin at the St. Laurence Boys Volleyball Summer Camp from July 11-14. Details and registration information are at stlaurence.com/summercamps.