Provisions based on gun-safety legislation introduced by U.S. Rep. Bobby L. Rush (D-1st) has passed the U.S. House of Representatives as part of the Bipartisan Safer Communities Act. The legislation has also passed the Senate.

Rush’s Gun Trafficking Prohibition Act (H.R. 30) prohibits the trafficking and straw purchasing of guns and bars the transfer of a firearm if the transferer knows that it will be used to commit a violent crime or drug trafficking offense.

The Bipartisan Safer Communities Act, which is said to be the first major gun safety package to pass Congress in more than 30 years, contains language similar to Rush’s, making straw purchasing and gun trafficking federal crimes. 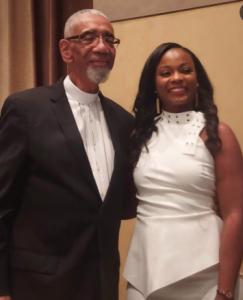 The Congressman recently attended the Cook County Bar Association’s annual banquet, where he was presented with the J. Ernest Wilkinson Award for his public service. He also congratulated incoming CCBA President Natasha Jenkins, who once served in his office as an intern. –Supplied photo

“Gun trafficking has devastated Chicago, as criminals have ducked Illinois’ gun safety laws and have brought in firearms from adjacent states to commit crimes,” Rush said. “That is why I introduced the Gun Trafficking Prohibition Act on the first day of the 117th Congress. I lost my son in a shooting 22 years ago. Gun violence prevention is a deeply personal issue that has been a top priority of mine in Congress. This legislation is nowhere near sufficient to stand up to the horror of gun violence, but it represents desperately needed and long overdue progress.”

Rush has sponsored this legislation four times and originally named his bill after Hadiya Pendleton, a teenage girl who was killed in Chicago with a trafficked gun. Once signed into law by President Joe Biden, this will be the first time federal penalties can be forced on gun traffickers, Rush said.