In a race between two men with village board experience, Dan Calandriello defeated Lou Gale in the Democratic primary Tuesday for 17th District Commissioner on the Cook County Board.

According to unofficial results from the Cook County Clerk’s Office with 211 of 217 precincts reporting, Calandriello received 10,467 votes (54 percent) to Gale’s 8,947 votes (46 percent).

After one of the friendlier campaigns in recent memory, there is no animosity between the two, both of whom spoke highly of the other.

In fact, if he beats Republican candidate Sean Morrison in November, Calandriello plans to lean on Gale. 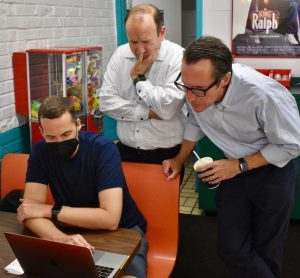 “We’ve already talked. He’s going to go on a little vacation. When he gets back, we’re definitely going to talk,” Calandriello said.

“We will be working together and I look forward to that.”

Asked why he prevailed, Calandriello said: “I had a clear message talking about the issues, particularly public safety, mental health issues. I think the district is ready for someone to address those issues.”

A former prosecutor who worked in the Cook County State’s Attorney’s office, Calandriello wants better gun safety with more invested in getting guns off the streets.

“The message resonated with the voters a little better, maybe,” he said. “Lou ran a good race. He’s a great trustee in La Grange and I look forward to working with him.”

They do have much in common.

Both are attorneys. Gale, 47, is in his second term on the La Grange Village Board. Calandriello, 37, served two terms as an Orland Park village trustee.

Shortly after 9 p.m. Tuesday at Highland Queen, an eatery on 55th Street in La Grange, Gale went from table to table, thanking supporters who had gathered hoping to celebrate.

He then called Calandriello to congratulate him. “It was very friendly. We’ve gotten along the whole time. Sounds like he was glad to get the call.”

Gale is supporting Calandriello in November. “I’d be happy to help him.”

“It’s mixed emotions,” Gale said of losing. “You’re sad for a bad outcome. You would have liked to have won,” Gale said. “At the same, in politics and elections, you can never mistake effort for results.”

Gale didn’t blame the low turnout for his loss.

“I can’t point to something and think ‘If I just or could have or maybe.’ At the end of the day, the answer is ‘I don’t know’,” Gale said.

Gale’s term on the La Grange Village Board runs to 2025.

“I’m going to stay on the village board and continue to make La Grange the best community I can make it, and continue to advocate for the things I care about,” Gale said.