It was quite a celebration at JC’s Pub in McCook Tuesday night as the results came in for the race for Lyons Township Republican Committeeperson.

McCook Mayor Terrance “Terry” Carr claimed victory in the race against GOP incumbent Catherine (Katie) Justak, by a 56-44% ratio (3,008-2,352) with all 69 precincts reporting.

At least 100 people were on hand to celebrate Carr’s victory in his first run for that title.

Food, drink and even fireworks flowed in the back of the venue as well wishers stopped by to congratulate him.

When asked why he decided to run for the position even though he’s busy being the mayor of McCook and running the Steak-n-Egger restaurant chain, Carr said he wanted to make a difference. 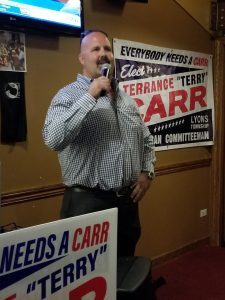 “Time after time, I would see the Republican ballot blank in many races, so I decided it was time. I’ve had many people tell me that it’s the first time they’ve pulled a Republican ballot in decades. I get along with everybody, and am not afraid to work, so I’m looking forward to it.”

Carr said his first order of business will be to focus on the governor’s race and the November election.

“It’s time to get to work. I support Darren Baily and am looking forward to November.”

Lyons Township voters have become familiar with a catchy phrase that was used in the Carr campaign. His signs and slogan state “Everybody needs a CARR.”

He explained that on February 14, 1975, his late grandfather was given a pin with the slogan when he ran and won the position of Cicero Township committeeman. His grandfather passed away late last year, and the slogan meant a lot to him.

In his speech Tuesday night, he had a moment of silence for his grandfather, who wanted him to run in this election.

He also noted that Republican House Leader Jim Durkin, of Western Springs, supported Justak, who was appointed in December also hails from the Western Springs area.

“As Durkin has supported (Richard) Irvin for governor, Katie Justak for committeeperson, and other candidates who were defeated tonight, maybe Durkin needs to think that he’s next!”

Durkin had paid for a political mailer against Carr, which attacked Carr and the fact that Carr served on the Village Board in McCook while County Commissioner and Mayor Jeff Tobolski was under federal indictment.

“I promised to run a clean campaign. I never wrote anything derogatory about my opponent or attacked her integrity. Unfortunately, some of Justak’s biggest supporters didn’t share my ‘clean campaign’ pledge.”

Carr will assume the post after the votes are certified in July. 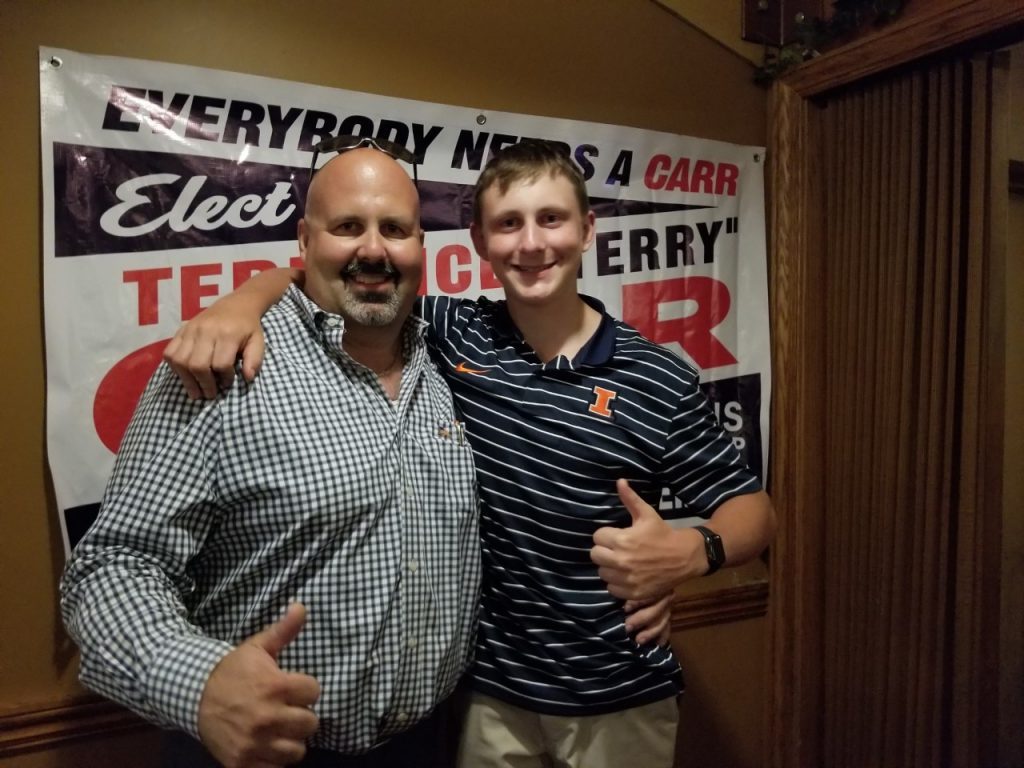 Terry Carr and his son give the thumbs up after the winning totals came in Tuesday night. (Photo by Carol McGowan)