Skip to content
July 1, 2022/Comments Off on Clean Sheet: Back of the Yards grad Roxy Herrera honored as one of top high school goalies in U.S.

Back of the Yards graduate Roxy Herrera receives a hug after winning an award for being one of the top goalies in the country on Thursday. Photo by Jeff Vorva

Roxy Herrera thinks she was 9 or 10 years old when she was the new kid on the Pumas soccer team in Gage Park.

Thus, she was immediately used as a goalie for the first time in her life.

“They told me the new player plays in goal,” Herrera said. “So, I did it. They said I was good at it and did the rest of the season.”

And the rest of her career.

Herrera had a great four-year high school career in the net for Back of the Yards and is heading to Roosevelt University in the fall. On Thursday, she was surprised by winning the Dude Wipes Clean Sheet Award as one of the top high school goalies in the United States.

She was summoned to the MAX McCook facility under the guise of posing for a life-sized poster. Once she got there, she was surprised by the honor and received customized goalie gloves and a new goalie jersey. International star goalie Brad Guzan, who was raised and still lives in Homer Glen, presented her with the bounty.

Guzan and Herrera also posed together for the life-sized poster, which will be 6-feet tall and 3-feet wide and will be displayed at Back of the Yards for years.

Several male players who were getting posters of themselves, including a group from Lyons, were also there to cheer on and honor Herrera. 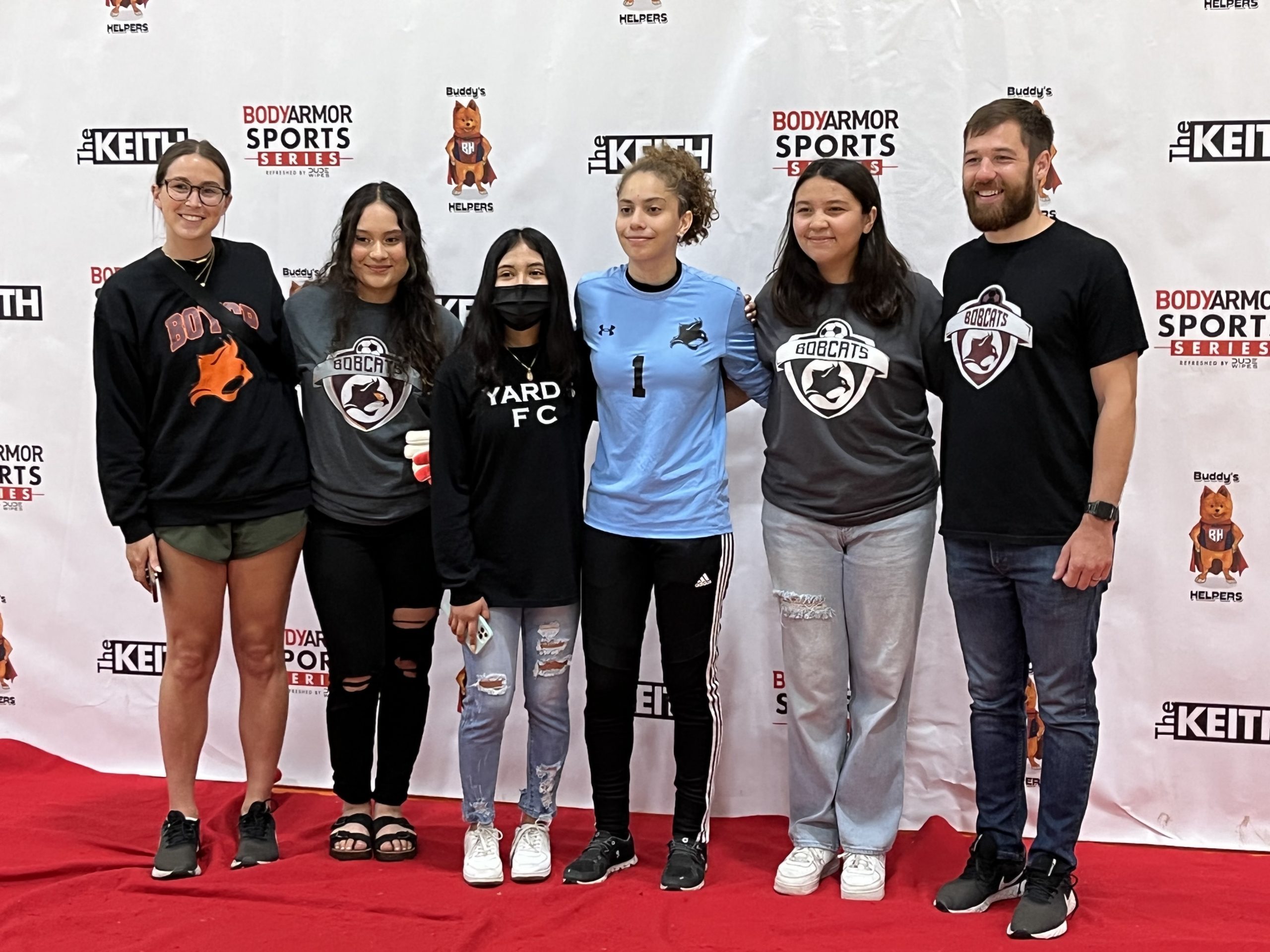 “I really was surprised,” she said. “I just thought I was getting my picture taken.”

Flash back to that first game in the net, Herrera said she wasn’t disappointed when that decision was made.

“If I’m being honest, I wanted to play goalie to begin with,” she said. “Before that, I played all over the place. So, I wanted to try being a goalkeeper for a little bit and see how it went. I really liked it a lot.

Back of the Yards coach Colin Rook was happy to have a player walk on his campus with some experience in the net.

“I was lucky enough to coach her for the last four seasons; she’s an incredible goalkeeper and a fantastic player,” Rook said. “She grew into a leadership role her senior year and she will be truly, truly missed, from my perspective.”

Third-year Roosevelt coach Tom Czop can’t wait for her to start her career at the NAIA school in Chicago.

“Obviously, the first thing you notice is the talent,” he said. “She is a talented goalkeeper.

“But the more and more I saw her in showcases and training, it was also the joy and the passion that stood out along with the leadership and positivity. She is always positive no matter what happens, even if the game is going the wrong way. She always picked up her teammates.

“That goes a long way when you have the talent and all of the other attributes that she has. That is the full package.” 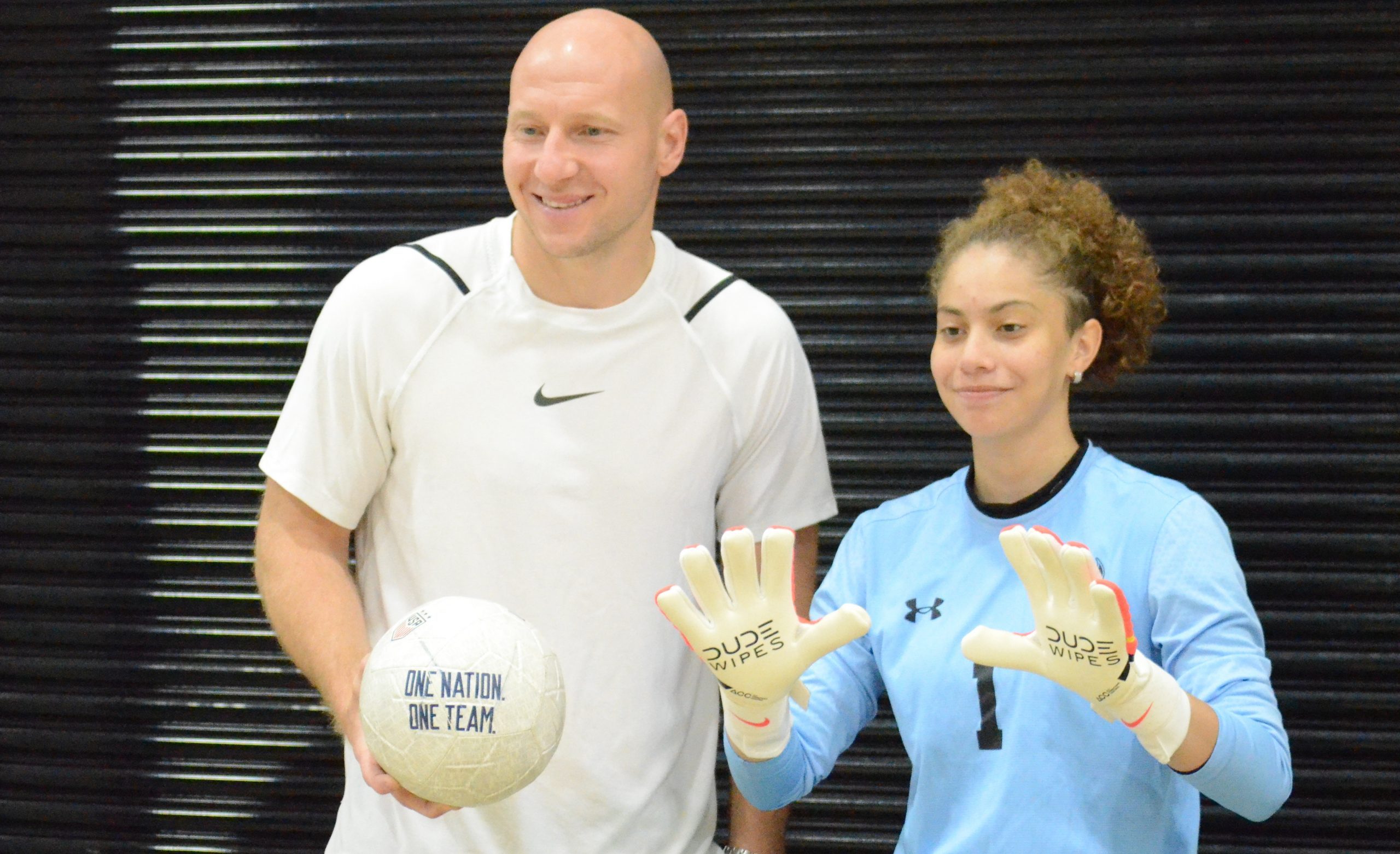 MLS and World Cup goalie Brad Guzan poses with recent Back of the Yards graduate Roxy Herrera for a life-sized poster that will be displayed in the school. Photo by Jeff Vorva

Herrera also helped make a little history in football her senior year, catching a touchdown pass in the inaugural Chicago Public League’s girls flag football championship in a 16-6 win over Prosser to cap an unbeaten season.

She said it was more exciting catching that pass than making a save in soccer.

“I think it was more exciting because we didn’t expect it,” she said. “We were very nervous. We went awhile without scoring and we needed something to get that lead and I was very excited.”

Aside from honoring Herrera, the event featured more than 50 male players who will have life-sized posters displayed in the fall at the Bodyarmor Series Showcase, which used to be sponsored by PepsiCo.

Lyons goalie Connor Schmitt is looking forward to the 2022 campaign after the Lions finished 17-6-1 and lost in sectional semifinal play to Benet in penalty kicks.

“We were disappointed with our outcome last year,” he said. “This year we have 11 returners. We’re looking to use our returners and hopefully we can dominate this year.” 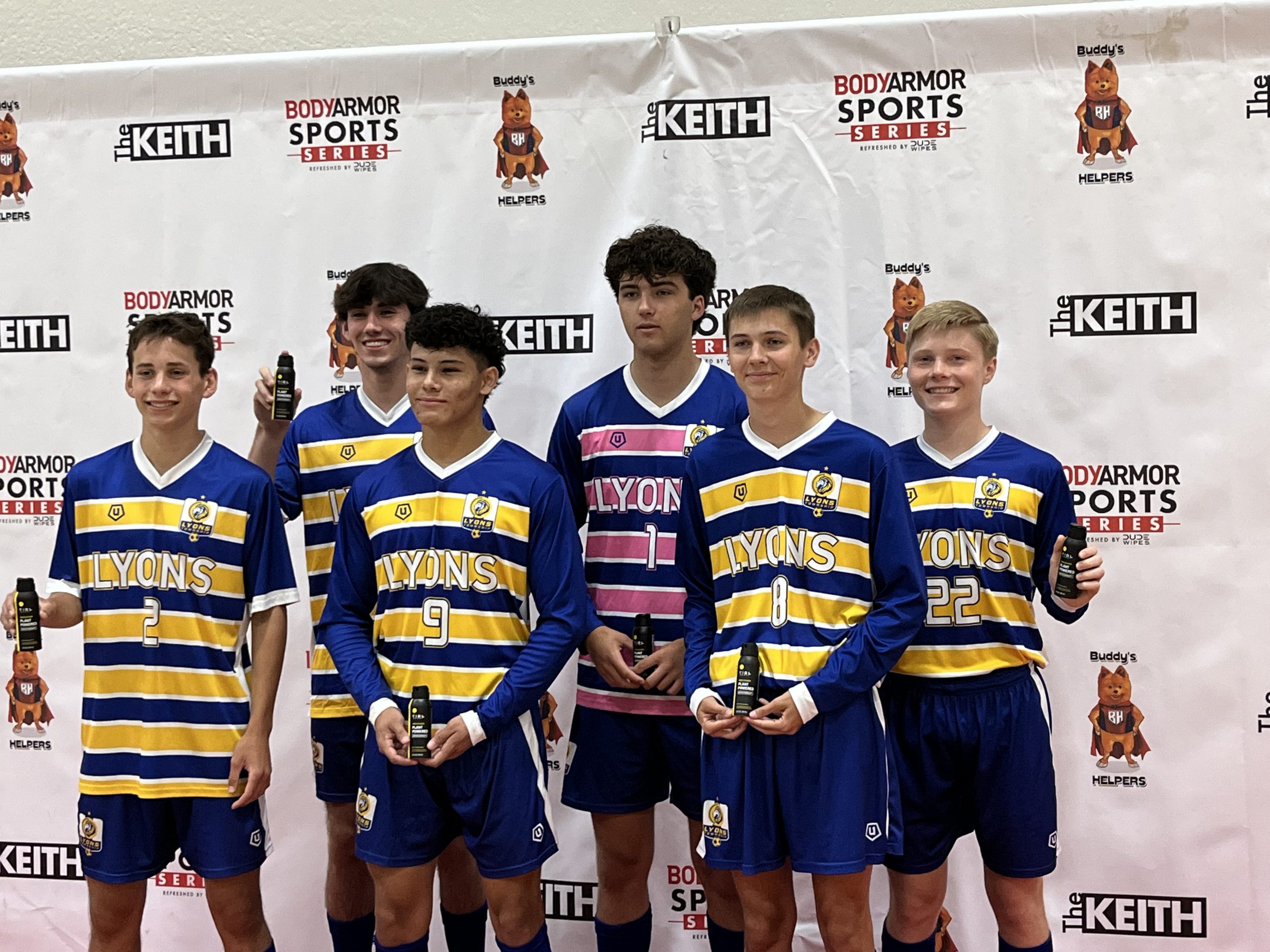 Lyons soccer players pose for a photo shoot for the coming Bodyarmor soccer tournament in the fall. Photo by Jeff Vorva