Skip to content
July 1, 2022/Comments Off on Jackson, Carlson headed for left-right clash in 1st

Danny Davis triumphs; will be unopposed this fall

While the Sean Casten-Marie Newman clash of incumbents appeared to draw the most attention of all congressional races on the Southwest Side, two other races made news on June 28.

With near all of 609 precincts reporting, Jackson led with 19,862 (28%) votes. A distant second was Third Ward Ald. Pat Dowell with 13,508 (19%). Third place was captured by non-profit executive Karin Norington-Reaves, who found Rush’s endorsement was no guarantee of victory. In fourth place was State Senator Jacqueline Y. Collins (D-16th) with 8,446 (12%). 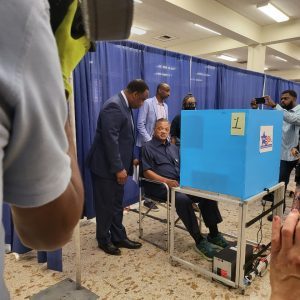 The remaining Democratic contenders all finished in single digits, far from the frontrunners.

The new First Congressional District includes all of Wrightwood and Parkview, almost all of Ashburn, a tiny sliver of the east end of Scottsdale and much of the south end of Chicago Lawn.

Jackson, a left-wing Democrat like his famous father (the Rev. Jesse L. Jackson Sr.), made his views clear during his victory speech.

Noting his pride at being a native South Sider, he pledged to “bring the South Side with me to Washington, D.C.” and make it clear that “our lives matter.”

He said it is shameful that in a nation that serves as the world’s breadbasket, there are such things as hunger and food deserts in a number of places, including the South Side.

Jackson also pledged to fight the easy availability of firearms and said he wants to stop the “bullets raining down in every direction.”

Matching the straight-talk reputation he earned in recent years on WVON-AM radio as a political analyst and commentator, Jackson said he has no plan to water down his positions in the interest of compromise.

“We’ve been compromising for far too long,” he told a jubilant crowd of supporters.

Jackson’s opponent in the general election will be Lemont resident Eric Carlson, who beat three opponents on the Republican side of the ticket.

Judging by the numbers, Carlson faces an uphill battle in the fall, as Democrats outnumber Republicans by a nearly 3-1 margin in the newly-drawn district.

In terms of ideology, voters will have a clear choice. While Jackson’s politics are notably left wing, Carlson is clearly on the right. He describes himself as a constitutional conservative and has as a campaign slogan, “One People, One America, No More Bullshit!”—in fact, as final votes were still being counted on June 29, he accused President Biden of weakening the U.S. military by implementing “woke, politically correct B.S.” policies.

Born in the Roseland neighborhood on the South Side, Carlson has lived in the suburbs most of his life. He served as a U.S. Army Ranger and today serves veterans, particularly those living with Post-Traumatic Stress Disorder.

In a newly redrawn 7th District—which for the first time scooped up parts of the Southwest Side (sections of Back of the Yards, Gage Park and Chicago Lawn)—veteran U.S. Rep. Danny K. Davis outlasted two opponents.

No candidates ran on the Republican side, virtually assuring Davis of victory in November.