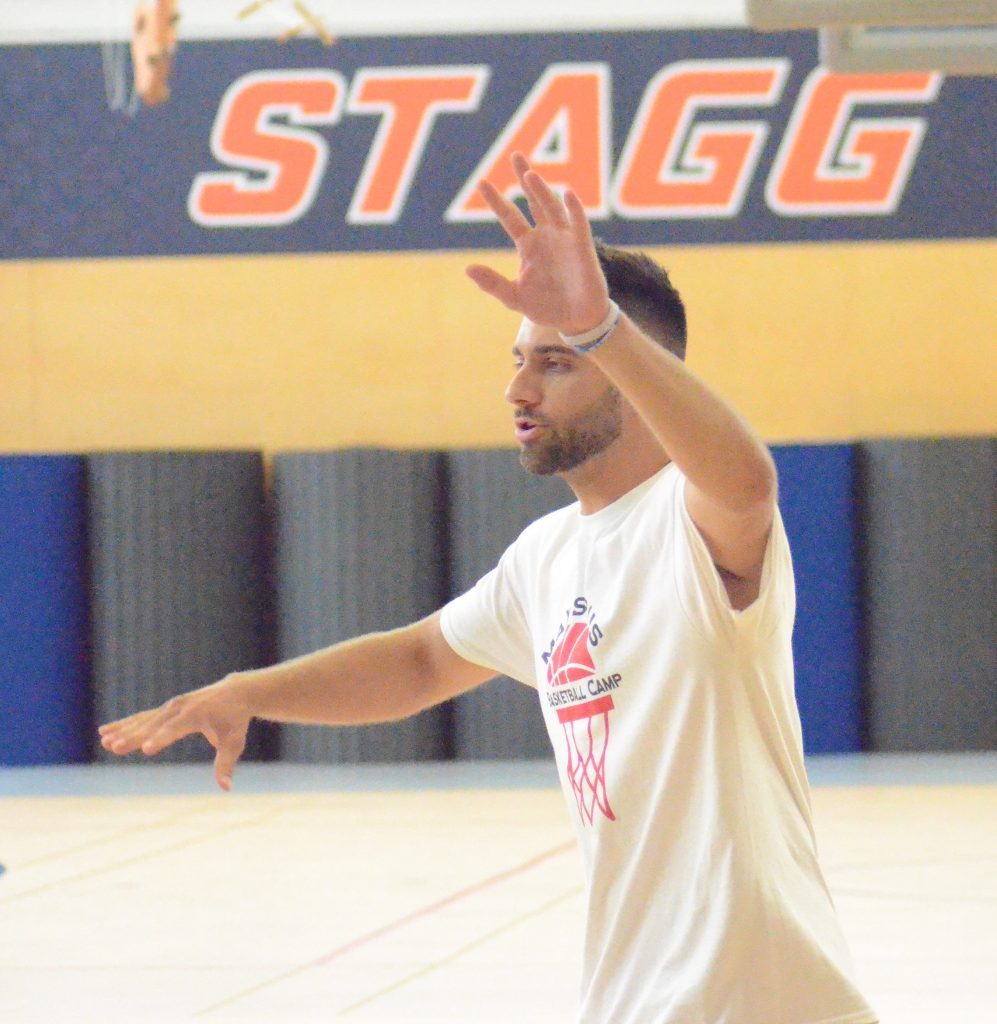 Former Stagg basketball star Max Strus, now a starter with the Miami Heat, gives a talk to players at his camp on Monday. Photo by Jeff Vorva

When Max Strus was in second grade, he walked through the doors of Stagg High School to attend a youth basketball camp.

He did that year after year and summer after summer.

On Monday, he walked through those same doors and headed to a basketball camp.

This one was different.

This one had his name on it.

“I grew up coming to the Stagg camps, and as soon as I became a professional I knew this is what I wanted to do for the kids around here.” 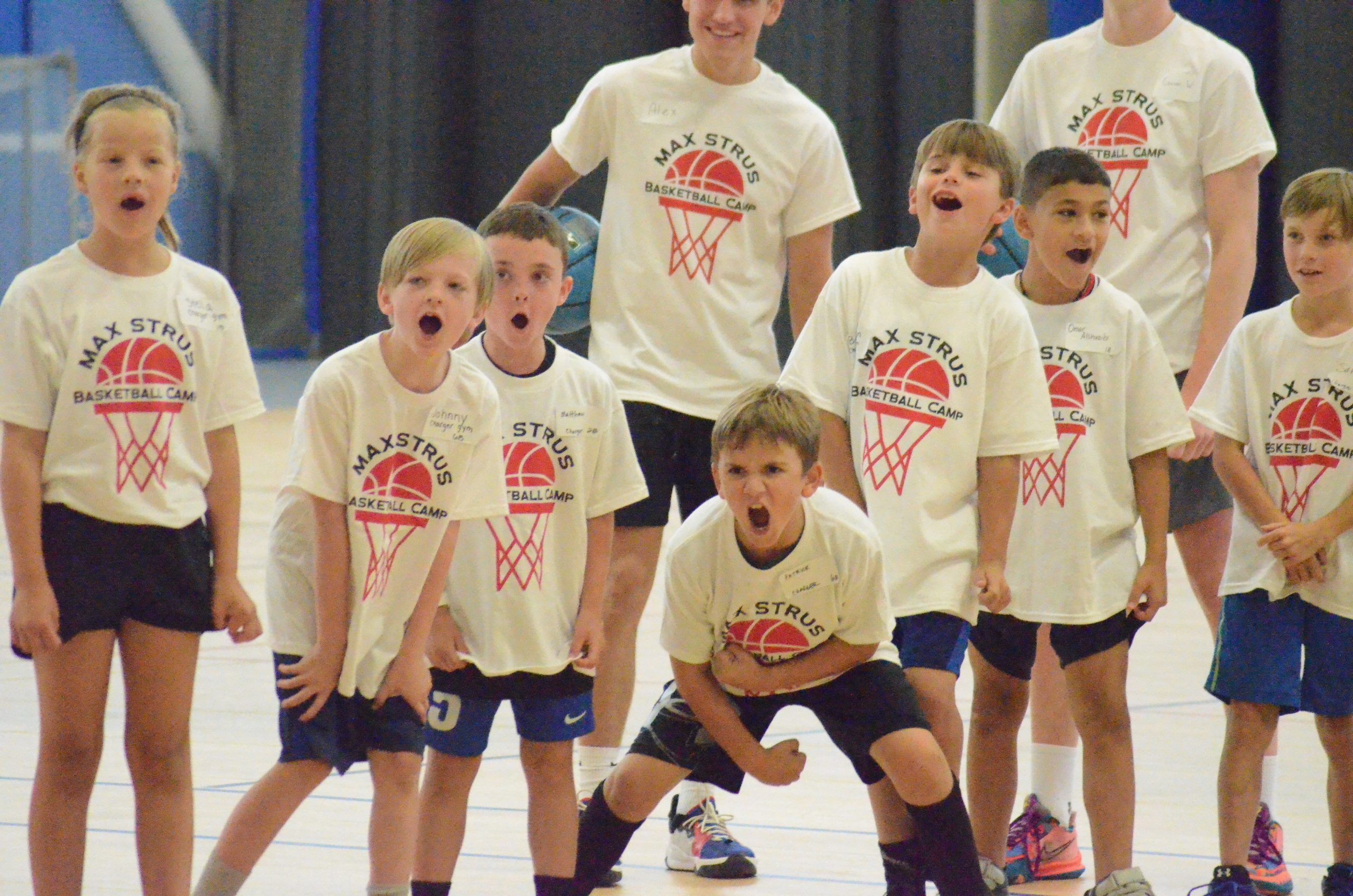 Youths at the Max Strus Basketball Camp hoot and holler during the morning session on July 11 at Stagg High School. Photo by Jeff Vorva

After graduating from Stagg, Strus starred at Division II Lewis University before transferring to DePaul. His post-college career began in the NBA summer league, during which he played for Boston. The Celtics cut him before the 2019-2020 season and he signed with his hometown Chicago Bulls, making his regular season debut on Nov. 22, 2019 against Miami.

Two nights before Christmas that year, he suffered a torn anterior cruciate ligament in a G League game. That ended his career in Chicago.

The next year, he signed a deal with Miami and played in 39 games, averaging six points per game.

The 2021-2022 season saw him go from a part-time player to a regular starter. He started 18 playoff games for the Heat, which reached the Eastern Conference finals.

Camp counselors used Strus’ story as an example of how hard work and perseverance can pay off.

“This was awesome,” Brendan said. “It was a lot of fun. I learned a lot of different things about defense, shooting and layups.”

Vincent, a California native, said he wanted to see Chicago in the summer and was happy to lend a hand at Strus’ camp.

“I used to go to camps when I was young,” said the Heat point guard. “Usually, the high school kids in the area were there teaching and coaching. As a young kid, you look up to them.

“Obviously, Max being from this area and playing professionally, he’s a great role model for them. What better way to give back than to have a camp like this?” 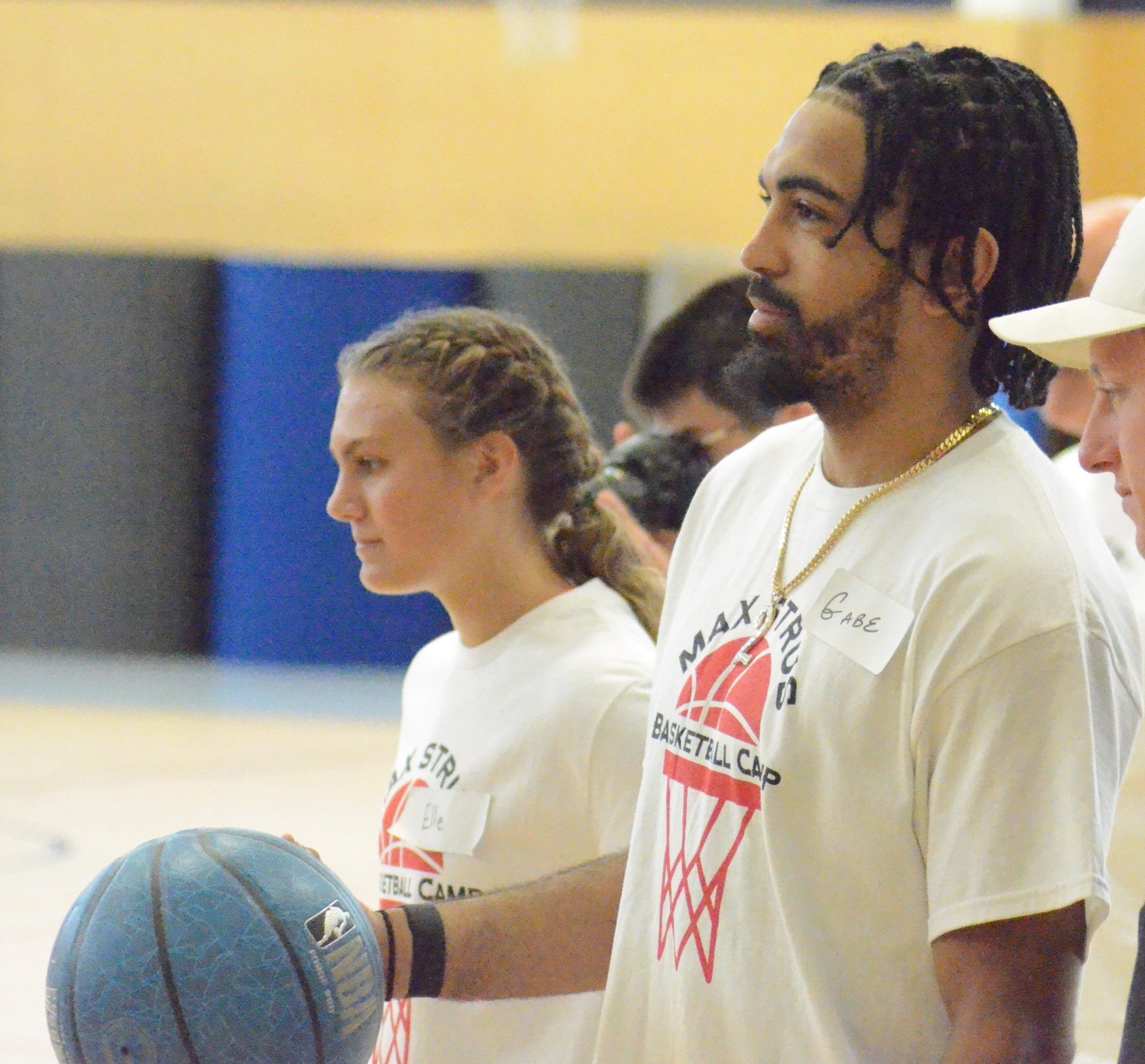 Miami Heat player Gabe Vincent was on hand to coach at the Max Strus Basketball Camp at Stagg. Photo by Jeff Vorva

Strus has fond memories of past camps at Stagg. He and his brother, Marty — now the Chargers’ boys basketball coach — used to come to camps.

“We both grew up coming to camps here,” Max said. “It was a fun camp and a kids camp that kids in the neighborhood would go to. We haven’t had anyone from the Southwest Suburbs make it this far, and I wanted to be that guy to be able to give back and give forward.”

Proceeds from the camp will go to the Andrew Weishar Foundation. Weishar, who was an athlete at and graduate of Brother Rice, died of cancer. The foundation helps families of cancer patients with financial relief.

Jacobs on the move

After a successful career at Notre Dame, which included winning the NCAA national championship in the 10,000-meter run in June, Sandburg graduate Dylan Jacobs has transferred to Tennessee for his fifth year of eligibility for track and cross country.

He follows in the footsteps of his Fighting Irish distance coach, Sean Carlson, who left the South Bend campus to become the director of cross country at Tennessee.

The 630 Volleyball 17-4 squad won the Classic division, with Lyons’ Connor Carroll being an impact player on that squad.

Matt Morales has been named the new boys volleyball coach at Chicago Christian. The North Central College graduate has coached boys and girls volleyball in the Plainfield school district.

One of the most electrifying high school football players to hail from the area in recent years was Hasan Muhammad-Rogers, a dual-threat quarterback who starred at Richards and led the team to the 2013 IHSA Class 6A state championship game. Muhammad-Rogers, who played collegiately at Illinois State and Lincoln (Missouri), recently picked up an offer to play professionally with the New Jersey Generals of the USFL.

St. Rita’s EJ Nwagnu, who won the state championship in the IHSA Class 2A 200-meter dash, has committed to Illinois State for track.