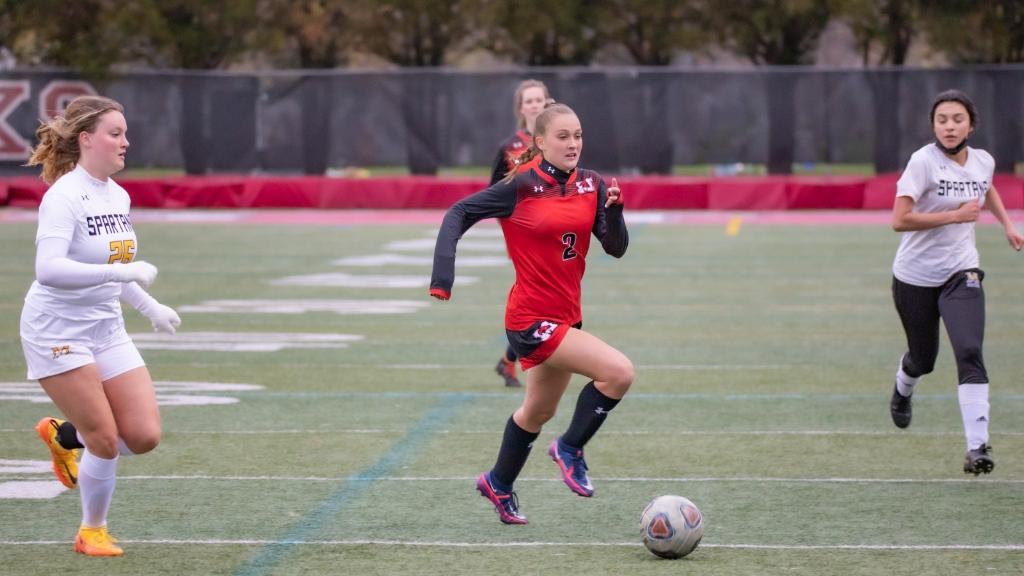 Gina Czochara had no doubt what she wanted.

After watching teammate CeCe Light break Marist’s school record for goals in a season with 27 in 2021, she was inspired.

When the RedHawks coaching staff asked players to write down a goal of theirs on a sticky note before the 2022 season, Czochara — who scored nine goals as a sophomore in 2021 — aimed high.

“On that sticky note, I wrote down breaking the school record,” Czochara said. “In my first game, I scored. Then I kept scoring. When I was halfway there, I was like, ‘Wow, I can really go do this.’

“That helped me keep the right mindset in games, kept me focused. It definitely pushed me to be the best player I could be, having that goal in mind.”

Czochara, a forward who will embark on her senior season in 2023, accomplished her goal. Class 2A Kankakee Sectional semifinal win over St. Laurence, the then-junior scored her 28th and final goal of the season, topping Light’s mark.

“I remember Maddie Meehan passed it to me and I shot it, and the second I scored I was so excited,” Czochara said. “I was like, ‘Oh my gosh, I just broke the record.’ I was so excited. I ran to all my teammates, gave them big hugs.

“When I came off, all my teammates on the bench gave me big hugs. Coach (Chris) Roe and coach (Sean) Maxwell congratulated me. It was just an awesome feeling and an awesome moment.”

Czochara said Light helped her realize that big things like the goals record were attainable.

“CeCe was definitely a motivator,” Czochara said. “She definitely set the bar high. When she scored all those goals, I wanted to go do the same. She’s definitely a great role model and a great player. I really enjoyed playing with her. Getting to break that record from her was amazing.

“Playing with CeCe, I definitely learned how to be such a competitor and to go out there and want it every game. CeCe taught me that you can do anything you put your mind to.”

As the season went on and Czochara’s goal numbers went up, her teammates got more excited for her to chase the record.

“My teammates and coached wanted it just as badly as I did and that helped push me,” Czochara said. “Before some of the games, some of the girls would ask me, ‘How many goals are you at?’ That really motivated me because I knew they were behind me and they wanted it to happen.

Marist got off to a tough start to the season, going 0-5-1 over its first six games before turning things around and finishing 15-10-1. The RedHawks won a regional championship and advanced to the sectional finals before falling to De La Salle.

“We started off a little bumpy,” Czochara said. “We had a really tough schedule at the start. I think those games prepared us physically, mentally and emotionally for the games that were to come. They pushed us to be better. Those teams we played set examples for where we wanted to be. We pushed to be just as good as some of those teams.”

Roe saw how hard Czochara pushed herself all season. He knows she has lofty expectations for herself and won’t slow down after a big junior year.

“She wants to be the best that has ever played the game,” Roe said. “When she sets her mind to something she puts every ounce into and achieves it. She is not finished and will turn even more heads next season.”

Czochara certainly is not satisfied.

“I hope to go break some more records next year, re-break this one hopefully,” she said. “Maybe get the career record. I’m not sure what the career record is, so we’ll have to figure that out for next season. I definitely want to set the bar high.”